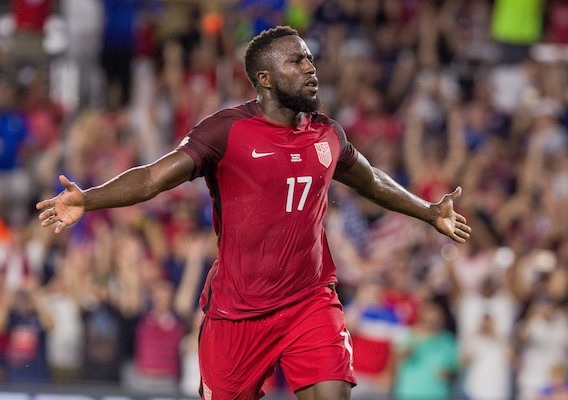 WITH THEIR BACKS planted firmly against the wall, Bruce Arena and the United States men's national team responded with pride and efficiency, taking an early lead and coasting to a comfortable 4-0 win over Panama in Orlando, Fla.

Arena hought Panama was going to play a defensive game but that was not the case as the visitors attacked early. Arena also selected an attack-oriented lineup and that overwhelmed Panama from the opening whistle.

Here's a look at the individual performances.

Tim Howard: The veteran goalkeeper was called into action a few times but none of his saves were too difficult. Rating: 5.5

Jorge Villafana: He wasn't flashy but the Santos Laguna left back did his job and limited dangerous plays down his flank. He wasn’t effective moving forward but after the U.S. took control of the game early, he didn’t have to be. Rating: 6

Matt Besler: The Sporting Kansas City captain had a few shaky moments in the first half but was generally the calmer of the central defenders in the U.S. backline. He had a very good second half. Rating: 6

Omar Gonzalez: Getting a somewhat surprising start over Geoff Cameron, Gonzalez was inserted into the team to help with the aerial battle against Panama’s Blas Perez. Gonzalez was useful on set piece defending but was at fault for Panama’s two dangerous chances in the first half—both which ended up off target. Rating: 5.5

DeAndre Yedlin: Yedlin showed just how valuable he is to this team Friday night. His 1v1 defending was outstanding and he combined very well with Paul Arriola to help open up the game on the right side. The Yedlin-Arriola right side duo could be a force moving forward for the U.S. Rating: 7

Michael Bradley: It was a very difficult assignment for Bradley to play as a lone defensive midfielder in a game where all five players in front of him where pushed deep into the attack. That resulted in a huge area of the field to cover until Dax McCarty and Alejandro Bedoya came into the game in the second half to provide more of a defensive presence. Many times the game seemed to bypass the midfield altogether. Bradley did a nice job given the flow of the game. He defended well, worked hard, and played the ball forward. Sure he had some turnovers but overall he made a positive contribution to the game. Rating: 6

Darlington Nagbe: It was a very quiet game for Nagbe who was the least involved out of all the U.S. midfielders or forwards. Unlike the aggressive right side with Yedlin and Arriola, Nagbe was quiet next to Villafana. He did have a couple of nice long balls which helped with scoring chances on the break in the first half. But he was not a consistent force throughout the game. Rating: 5.5

Christian Pulisic: It was a special performance from a special talent. The United States needed a big-time effort and he delivered both with his finishing and his passing. He moved so effectively into space and his quickness was something Panama had no answer for. He took an absolute beating from Panama and should have drawn at least one red card. Arena mercifully took him out in the 54th minute. It is a huge improvement to see him in the middle as opposed to out on the wing. Rating: 8.5

Paul Arriola: Arriola is raw and both his finishing and final passes need work. But regardless, he is a big asset to the U.S. team right now. He is a pure winger and that is something the team hasn’t had in a while. When the games are wide open, Arriola can attack and is hard to defend. With Pulisic driving defenders nuts centrally, Arriola almost becomes too much to handle. In this game, he was part of several dangerous chances and helped lead several good breaks into the open field. He picked up an assist on Wood’s goal with a nice run and tidy short pass. With more games, he can become an impact player in Russia. Rating: 6.5

Bobby Wood: It was a top-notch performance from Wood, who drew a penalty and scored the team’s final goal. He was consistently dangerous although he missed a few very good chances early. For the first time, he seemed to find a way to combine well with Altidore. Rating: 7.5

Jozy Altidore: In a game where his team really needed him, Altidore showed up with a fine performance. His first goal was set up on a silver platter from Pulisic but Altidore made a nice move to get into position for the tap-in. His penalty was confidently taken. On Pulisic’s opening goal, Altidore made a very good first touch to help spring teenage prodigy. Like Wood, Altidore still missed a few chances that he should have scored, but it was a clutch performance that was overall very solid. Rating: 7.5

Dax McCarty: Even if McCarty does not make the World Cup roster next year and this turns out to be the only qualifier he ever appears in, he should walk away very proud of his performance. Making his World Cup qualifying debut in his hometown, McCarty replaced a beat-up Pulisic and played very well. He made many good passes and was very steady. He had one of the best passes of the game to spring Arriola in a 1v1 with Panama goalkeeper Jaime Penedo who ended up making the save. Overall, he helped the U.S. team continue at a high level after Pulisic’s exit and see out the win. Rating: 6.5

Clint Dempsey: The Seattle Sounder is still trying to surpass Landon Donovan as the team’s all-time leading scorer. He came in in the 71st minute when he replaced Altidore but was not part of any dangerous chances. The game was out of hand when he entered and he played conservatively. Rating: 5.5

Alejandro Bedoya: The Philadelphia Union midfielder replaced Nagbe in the 79th and provided some defensive presence to help keep Panama from creating anything dangerous in the game’s final 11 minutes. Rating: 5.5

Bruce Arena: Arena made a smart lineup selection that really couldn’t be second-guessed—aside from Gonzalez over Cameron. With Nagbe and Arriola lacking defensive presence on the wings, Arena really went for it offensively and it paid off. Panama, strangely, did not play a bunker-counter approach, which U.S. opponents have found successful for most of the past few months. That played right into Arena’s hands and the U.S. was able to destroy Panama early.

Even with an old roster, Arena started 22-year-old Arriola on the wing which was aggressive but it helped pushed the pace of the game. The coach also decided to put Pulisic in the middle, not on one of the wings, and this gave Pulisic more touches and made him harder to mark out of the game. Arena stressed the attack, which put Bradley and the central defenders under a lot of stress—but it really worked out. Rating: 8