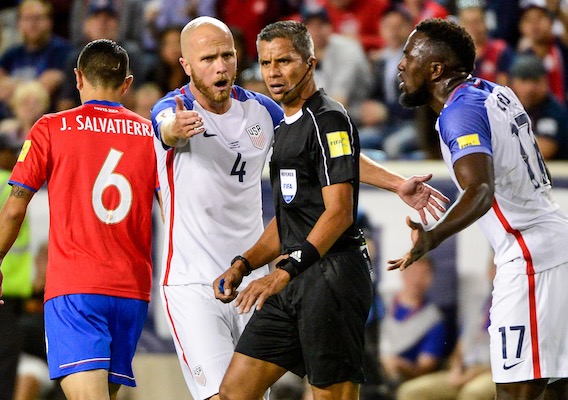 The international break is over and Major League Soccer returns to the soccer spotlight with a handful of key clashes, an artificial turf stadium in Georgia, and some frustrated and/or tired national team players.
BY Franco Panizo Posted
September 08, 2017
8:00 AM

HOME IS WHERE YOU MAKE IT. Well, Atlanta United has made its digs big, bold, and innovative.

After more than half a season playing at Bobby Dodd Stadium, Atlanta United will open the doors to the luxurious Mercedes-Benz Stadium on Sunday for a showdown with FC Dallas. The venue that cost approximately $1.6 billion is not soccer-specific but it has been made to feel more intimate with the use of Atlanta-branded curtains that close off the upper bowl and downsize the seating capacity from more than 70,000 to 42,500.

For Atlanta United, the stadium opening comes at an opportune time. The club is currently on a winless run of four games and sits in sixth place in the Eastern Conference. Having the next six matches—and eight of the last 10—at home in front of its boisterous faithful should provide a boost to Atlanta’s playoff hopes. Still, "should" does not mean it will.

After all, one concern for Atlanta United is how its dynamic attack will be affected by playing on turf. Mercedez-Benz Stadium’s surface is artificial grass, and that will be something that playmaker Miguel Almiron, striker Josef Martinez, midfielder Hector Villalba, and Co. will have adjust to quickly after months of playing on grass at Bobby Dodd Stadium.

This weekend’s New England Revolution-Montreal Impact affair might not be on national TV in the United States but you will want to find a way to watch it.

The tilt at Gillette Stadium should be a complete dogfight. In terms of the Eastern Conference playoff picture, both teams are on the outside looking in, and a loss here would only serve to put them further behind the eight ball with precious few games remaining.

The match’s playoff implications will certainly add an extra bit of sizzle to the proceedings, but what makes the encounter even more intriguing is the form of some of the attackers that will feature. Kei Kamara is coming off his first MLS hat-trick performance, one that saw him win the league’s Player of the Week award, and he will only want to build on that as New England attempts to close the four-point gap between them and Atlanta for the final playoff berth.

Montreal, which is even on points with the expansion club but has a substantially worse goal differential, boasts dangerous weapons of its own. Blerim Dzemaili should be back on the field for the Impact after returning from international duty, and his presence alongside Ignacio Piatti will give the Canadian outfit a good bit of firepower.

Games with so much at stake sometimes end up being very tight and cagey, but the attacking talent that will be on display combined with the sides’ leaky defenses—the Revolution have conceded 41 goals and the Impact 42—could make this an extremely open and entertaining affair. Don’t miss it.

If you are wondering what other game could be worth checking out, look no further than New York City FC’s meeting with the Portland Timbers.

NYCFC is set to take on the Timbers at Yankee Stadium on Saturday in a battle of clubs sitting in second place in their respective conferences. New York City will be playing on short rest but will be full of confidence after having topped Sporting Kansas City, 1-0, on Wednesday. What’s more is that sensational striker David Villa might be back in the fold after missing out on the midweek victory because of injury.

Regardless of whether Villa is on the field or not, Portland will be seeking to snap NYCFC’s five-match unbeaten run while extending its own undefeated streak to four games. A key player in potentially making that happen could be star playmaker Diego Valeri, who is in red-hot form after scoring in six consecutive matches.

Valeri will be eager to continue his tear by finding the back of the net again in order to help the Timbers collect three more points. Doing so could catapult the them into first place in the west if the Seattle Sounders slip at home on Sunday against the LA Galaxy, and that would make for an ideal weekend for Portland, its players, and supporters.

A largely forgettable week for the U.S. national team is over. Now, the players’ focus returns to their clubs for the stretch run.

The MLS-based contingent of U.S. internationals should be back in action this weekend, including the Toronto FC duo of Michael Bradley and Jozy Altidore. Bradley and Altidore will attempt to keep Toronto comfortably ahead in the Supporters’ Shield race in a Saturday home game against the San Jose Earthquakes, and you might want to keep a special eye on Altidore given that he frustratingly missed Tuesday’s draw in Honduras because of yellow card accumulation.

Elsewhere, Clint Dempsey and Jordan Morris will try and keep the Sounders in the top spot in the Western Conference when the Galaxy come to town. Both Dempsey and Morris put in 90-minute shifts in the 1-1 tie in San Pedro Sula, so it is unclear if either will be given the green light from the start on Sunday. Nonetheless, they both seem likely to feature given that they have had a few days to rest, recover, and prepare.

One other player worth watching: Tim Howard. The Colorado Rapids are all but eliminated from playoff contention in the Western Conference, and that, paired with Howard’s recent U.S. benching following a bad outing in a 2-0 loss vs. Costa Rica, make his situation intriguing. Howard should get the nod in the Rapids’ Saturday visit to the Houston Dynamo, but how he performs could tell us plenty about his mental state at the moment.