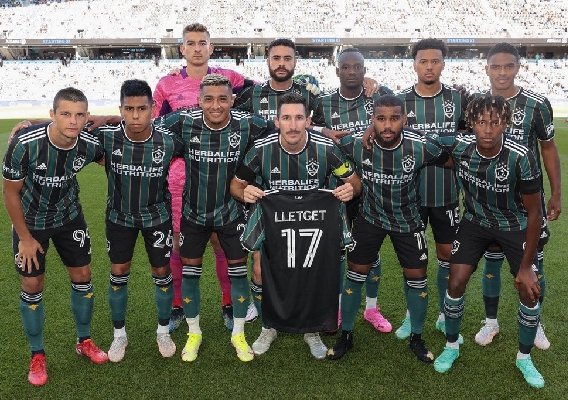 Atlanta is back. Galaxy wins with emotion, mixed weekend for youth

For some, it was a great weekend but the disappointing teams defined the past few days as a bunch of "big expectation" teams put in terrible outings. While the "Play Your Kids" movement has been important to the league in recent years, only a few young players shined. ASN's Brian Sciaretta reports
BY Brian Sciaretta Posted
August 16, 2021
5:30 AM

THIS PAST WEEKEND IN MLS wasn’t all that revealing. The good teams remained good, the bad teams are still bad. Unfortunately, the youth report isn’t nearly as impressive as most weeks this season. That doesn’t mean, however there wasn’t a lot of big stories – touching even.

The Galaxy won not just a good win, but an emotional and character building one too. Atlanta United is playing well and is fun to watch again.

With all that said, let’s get into it.

The youth movement within MLS has been great the past few years and the young players coming through the year have been impressive and have drawn a lot of eyes on the games.

That being said, this past weekend saw far fewer impressive performances than even in the past few weeks. A lot of that is easy to explain. Philadelphia didn’t play this weekend. DC United, with Kevin Paredes and Moses Nyeman, had an absolute stinker against Nashville. The New York Red Bulls and FC Dallas likewise had poor outings. Combined with the slew of recent sales, that accounts for the rough weekend.

But it wasn’t all bad. Here are players who stood out.

Julian Araujo was excellent for the LA Galaxy on Saturday in an impressive 1-0 win over Minnesota United. He won 10/14 duels, was 30/34 in passing, was three of four dribbles, had 74 touches over 90 minutes. Araujo has been excellent all season ans is key to the Galaxy’s resurgence under Gregg Vanney. There is a lot of talk about him potentially defecting from the United States to Mexico internationally and while the U.S. has a lot of promising fullbacks, it’s far from settled. Araujo would be a disappointing loss.

Watched the Galaxy - Minnesota game. I know there is the dual national discussion and the #USMNT has a lot of right backs but Julian Araujo is a heck of a player. It would be a loss if he switches b/c as good as all the players look, nothing is set and everyone is young

James Sands also had a very good outing for NYCFC on Saturday in a 2-0 win over Inter Miami at Red Bull Arena. He won all seven of his duels, completed a high percentage of his passes and long balls, and was instrumental in the clean sheet.

Cole Bassett is also one of the more underrated young players in the league. And he’s been playing an important role in Colorado sitting fourth place in the West right now. Colorado defeated Houston 3-1 on the road on Saturday and Bassett was the best player on the field in this one – creating chances, maintaining possession, defending, tackling, etc.

All in all, it wasn’t a great weekend for the league’s top young players but these three clearly stood out.

Atlanta United is back

Just a few weeks ago, Atlanta United’s playoff chances seemed done and dead. But this league can be forgiving and right now their odds are improving. They’re trending in all the right direction with no signs of slowing down. Think about all the areas they have improved – Josef Martinez is looking more like his pre-ACL tear than ever before, Miles Robinson has returned from the Gold Cup and is now playing at a designated player level, and the team was stagnating under Gabriel Henize and he has been removed.

That’s a lot – and it doesn’t even account that the biggest shoe is about ready to drop with $13 million man Luiz Araujo getting ready to join. Araujo is still sorting out visa issues but his arrival from Lille is going to provide Atlanta with massive firepower.

Sunday’s 1-0 win over LAFC wasn’t perfect but it was completely deserved and the emotion after Martinez’s goal – his first at Mercedes Benz Stadium in nearly two years – reflected a team that don’t want to play right now. Atlanta’s defense is also holding tight right now and the offence with Ezequiel Barco now in form is a handful.

The Eastern conference has a lot of team’s fading. The Columbus Crew haven’t been able to get their act together all season. The Red Bulls are probably done. Orlando has questions with the injury to Daryl Dike. DC United’s loss looked like the club might be running out of gas,. Philadelphia is young and now without a designated player.

It’s still a five point gap but Atlanta’s push in the weeks ahead will be fun to watch.

Meanwhile, LAFC is now winless in six games – its worst stretch in history. Bob Bradley’s crew is not creating chances. They’re not in the playoff positions now but on the flip side, it won’t take a dramatic improvement to overtake Real Salt Lake or Portland right now.

The LA Galaxy 1-0 win on the road over Minnesota United was both a positive sign for the team and an emotional moment for the entire American soccer community in the wake of the tragic and sudden death of the sister of Galaxy and United States national team midfielder Sebastian Lletget.

The players acknowledged they were playing for Lletget and in this one, delivered their most impressive victory of the year against a club that hadn’t lost in 13 games before this one. Not only was the Galaxy without Lletget, but Chichartio was also unavailable due to injury.

This was a win about character and seemingly every player stepped up. Kevin Cabral and Dejan Joveljic have not disappointed. Recent acquisition Niko Hamalainen became the Galaxy’s third American-born player which represents another country along with Derrick Williams and Efra Alvarez. Williams and Alvarez also had a good game in this one.

You can see Gregg Vanney has the Galaxy on the path towards becoming one of the best players in this league and it’s all coming together. This win was about emotion while playing for a fallen teammate but it’s also reflective of a team that is tight and will suffer for each other. Come the playoffs, that is a huge trait.

DC United has been having a very promising season under new manager Hernan Losada but was routed by Nashville 5-2 on Saturday. It’s still too early to tell if this is a blip in the radar or a more troubling sign, but is certainly worth keeping an eye on. Losada employs a high press and frantic style that requires a lot of stamina, and sometimes it can open itself up to injuries.

United is dealing with injuries and a young roster. Along with the midsummer heat in most of the United States, it is a tough task on the DC United team. In this game, Nashville scored five goals and it could have been worse (United also had two goal line clearances).

His 5th goal in his last 6 starts & 7 goals on the year for @BigAfrika88! pic.twitter.com/0ZL5jH1RbH

Nashville is not a team to take lightly. They don’t always score a lot, but they’re capable of it – as Saturday’s game indicates. CJ Sapong’s play as of late has been so strong in many different areas. He can score but he can also hold the ball up and create for others.

Two teams who played well, didn’t play down to the level of their opponents, and convincingly won their games was NYCFC in a 2-0 win over Inter Miami and Sporting Kansas City which defeated FC Dallas 2-0 on the road. These are two teams to watch.

NYCFC is a deep and complete team and as James Sands told ASN last week – as strong as it has ever been. The pieces are in place for a serious run at MLS Cup this year. Right now, they are the biggest threat in the East to New England.

As for Sporting Kansas City, the club seem well prepared for the loss of Gianluca Busio and they haven’t lost a beat since he left after the Gold Cup. Alan Pulido and Daniel Salloi are the focal point of the offense while Johnny Russell offers leadership. The midfield trio of Gadi Kinda, longtime vet Roger Espinoza, and Remi Walter are tough when on their game.

FC Dallas has some seriously impressive youngsters, but you can tell the difference between youth and experience in this one. Unless FC Dallas played a top-level game for them, they had very little chance.

Right now, you have to like Seattle and Kansas City being the favorites in the West.

There were so many performances this weekend that were about the disappointing state of one team than about the positive performance of another. We spoke about LAFC – a typical contender – but one that feels like this current group has hit a wall. There are a whole bunch of disappointments beyond LAFC.

The New York Red Bulls are now almost certainly going to miss the playoffs for the first time since the club left the now demolished Giants Stadium. The club has not alleviated concern that the Austrian ownership cares about New York. Sure, there is merit to the farm team reputation but, so what? You can win and be a farm team – and Red Bull Salzburg shows that. But it is more expensive to win in MLS than in Austria and Red Bull obviously cares about its own back yard. This team has needed a central defender all season and to address this brings in an unproven kid from Uruguay. There is a need for forwards, and that hasn’t panned out.

The ending of the Red Bull’s 2-1 loss was a debacle Montreal was awarded two penalties in stoppage time and the second had to be retaken three times due to encroachment. But that masks that the Red Bulls look to score and then bunker out games. When you have a lack of defenders, it often doesn’t hold. The Red Bulls have hemorrhaged points at the end of games and deserved to lose.

Toronto FC has a big payroll and should have the expectations in being among the best in the league. But this team isn’t going to make the playoffs, let alone return to MLS Cup again to face the Sounders. Yeferson Soteldo and Alejandro Pozuelo are two players who should be difference makers. New England is probably the best team in the league but Toronto was at home and New England was without Carles Gil. Still, New England won 2-1.

Toronto’s approach this entire season has been off and it’s backline needs a complete makeover.

The Portland Timbers were blown out at home 6-2 on Sunday night to rivals Seattle. This was a fun game, at least, and some of the goals scored were of immense quality. There is a lot to like about Portland but its defense and age are non-starters when talking about MLS Cup contenders. It’s old roster makes it hard to compete over a long season and when the team can’t defend, things go south quickly. This game simply got away from Portland immediately and they had no answer.

Hell of a goal. Wowzers pic.twitter.com/iwayFFD13w

By now, everyone has read about how the Columbus Crew are not generating chances and how their XG is very low. Thus far, Columbus has not been serious about its title defense. What is alarming is that Columbus has the talent, but can’t fix the problem. Saturday’s 1-0 loss away at Chicago should have been a winnable game, but Chicago was able to let Columbus defeat itself but defending until the point when Columbus got frustrated and couldn’t do anything right.

Between Columbus, Portland, Toronto, LAFC, and the Red Bulls – there have been so many important teams in the league playing so far below potential. That doesn’t even include an improving Atlanta which may or may not make it.