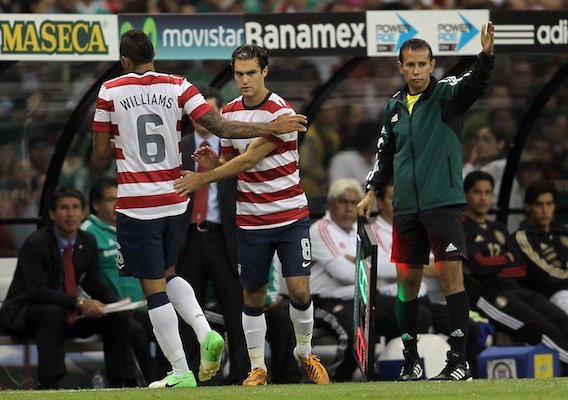 ASN Weekly Debate: Will the USMNT Make the Hex?

Noah Davis: So Ryan, four games into the semifinal round of CONCACAF World Cup 2014 qualification, how worried should we be about the U.S. qualifying?

Ryan O'Hanlon: Not as worried as we were about a month ago—I didn't sleep, eat, or bathe between the two Jamaica games—but I'm not sure we can really feel all that confident either. Guatemala has Carlos Ruiz, and Antigua & Barbuda is not in the U.S., which always makes things difficult.

Davis: It didn't look great after the loss in Jamaica—though not as dire as most people thought, I'd argue—but I think the team should be okay now. Still, they haven't won away from home in WCQ under Klinsmann. Admittedly, a tiny sample size but still...

O'Hanlon: In Jamaica, the team was without Michael Bradley and Landon Donovan—shameless: numbers 2 and 4 in the ASN 100—which is pretty tough if you're not Spain or Brazil with a bottom-less player pool. The team, adding in Zusi and Williams, too, should be totally different from the one that scuffed its way through The Office, no?

Davis: Yeah, but not all that different than the one that drew 1-1 in Guatemala. More concerning to me is the propensity to give up late goals. Three WCQ games, three late goals for the opposition. Giving up a goal after the hour mark seems to be the new giving up a goal in the first 15 minutes. They don't put away teams and then it comes back to haunt them.

O'Hanlon: Is that something you pin on the coach? Or is it just that this team, like every USMNT team ever, only has so many goals in it per game? Klinsmann's in-game adjustments have been questionable at best and chosen-via-halftime-dart-board at worst, it seems.

Davis: A little bit of both. (Cop out, much?) No team in the world is every going to finish all its chances, and this American outfit won't score in bunches. Fine. But I'd like to see them close out games instead of, you know, giving Jamaica the ball for 20 minutes and hoping.

O'Hanlon: Every game has its ebbs and flows where each team gets its extended shares of the play, but it does seem like the U.S. is always flowing—or is it ebbing?—in the beginning of the game and then ebbing its way to the final whistle. Man, now you've pretty much convinced me that Carlos Ruiz is gonna steal one in injury time a week from Tuesday. What if that actually happens, and the team doesn't qualify? Soccer in America becomes punishable by deportation to one of Jupiter's moons, right?

Davis: Well, the launch of ASN will have been exceptionally poorly timed, for one.

I would imagine Klinsmann gets fired before the final whistle and deported to, well, California. It wouldn't be the end of the world because nothing is the end of the world, but it's a serious step in the wrong direction. And the outcry from the American supporter base would be ear-splittingly loud.

The good thing is that I think it's easier to qualify from the Hexagonal than from the semifinals.

O'Hanlon: Re: nothing being the end of the world, apparently we have differing opinions of the inevitable dogs-team-up-with-cats anti-human mutiny, but that's a discussion for another time.

The semifinals do kind of have an amatuer-but-inevitable feel. You go to Antigua and Jamaica and play in these weird stadiums and you "should" win but you don't, and then these games suddenly mean something more because you're only playing six and another non-win would be fatal. In the Hexagonal, it's all final, the competition is better, the facilites are (slightly) better, and it's maybe easier to get up for after playing a Sunday game in Frankfurt and then flying cross-Earth.

Or at least, that's what I'll be telling myself in a few months.