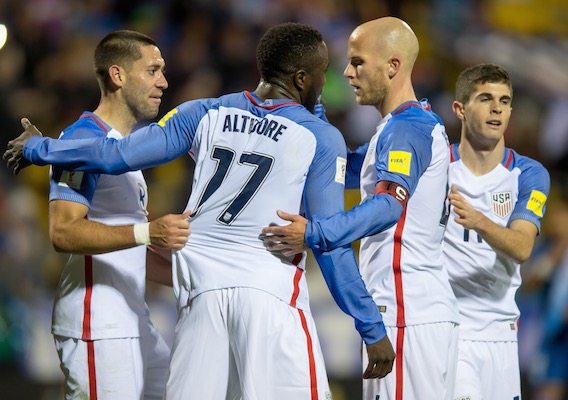 Will Christian Pulisic get the call? How about Emerson Hyndman? And Matt Miazga? ASN's Brian Sciaretta made a list, checked it twice, and shares it below, complete with a detailed rationale.
BY Brian Sciaretta Posted
April 25, 2016
6:00 AM

THE COPA AMERICA CENTENARIO is going to be a high-profile tournament for the United States men's national team, and a revelatory one as well. But the right results will require the right personnel.

Here’s my prediction for the 23-man roster, including multiple players on the bubble.

The skinny: Neither Brad Guzan nor Tim Howard is having a particularly good season, but they’re still the top two keepers on this team. Yet with Howard riding the bench as his magnificent Everton careers draws to a close, it’s impossible to say which of these two is the starter.

The third keeper spot, meanwhile, is up for grabs, and while it’s fun to talk about, it’s not the most important decision for Jurgen Klinsmann. For now, you really have to like the way David Bingham is playing for San Jose. Ethan Horvath emerged as the starting U-23 goalkeeper but is it really worth pulling him away from Molde in the middle of its season so he can sit on the bench?

The skinny: Three central defenders seem like obvious picks: John Brooks, Geoff Cameron, and Matt Besler. The fourth could be up for grabs, and while Steve Birnbaum has earned a spot, Klinsmann might also opt to reward Matt Miazga for his move to (and occasional playing time at) Chelsea.

Turning to fullbacks, did Edgar Castillo do enough in March to justify a recall? Fabian Johnson remains one of the best fullbacks on the team, even if he is a much better midfielder. Yedlin, for his part, is earning consistent minutes at right back for Sunderland and, most importantly, it looks as if his defense has improved to the point where Klinsmann might feel confident using him in that spot against higher-quality competition.

Then there is Timothy Chandler who is … perplexing. He has been given loads of opportunities with the U.S. team and his commitment to the team has been called into question at times. To this day, his best performance for the United States was in his debut against Argentina in 2011 under Bob Bradley. After that performance and a strong start to his Bundesliga career, it looked as if he was going to be the heir to Steve Cherundolo. He never seized it and has mostly disappointed.

For a while, it appeared as if Chandler was gone from the picture as he was not even making the bench for Eintracht Frankfurt. A recent coaching change has seen him start and Klinsmann touched upon a possible return to the team. In a tournament in which experience will be valuable, perhaps that could tip things in Chandler’s favor?

The skinny: First, the obvious locks: Michael Bradley and Jermaine Jones. Second, the dreadlocks: Kyle Beckerman, who should likewise be back after playing well against Guatemala and being singled out by Klinsmann for his leadership ability.

Alejandro Bedoya remains a key part of this team when healthy, too, and Christian Pulisic, while young, looks comfortable and helpful to one of the best teams in the world in Borussia Dortmund. He is no Julian Green; he can help this team right now.

“With the statements he sends out there—scoring his first goal for Dortmund, starting a game in the Bundesliga, getting valuable minutes in that very intense environment—he sends messages out toward what happens with the national team as well,” Klinsmann said of Pulisic. “We are just weeks away from Copa America Centenario, the biggest competition in the United States since the 1994 World Cup. He makes himself a case.”

But from here the decisions get a bit tougher. Gyasi Zardes played an enormous amount of minutes for the U.S. in 2015, mostly on the wing, although his effectiveness has waned. Ethan Finlay’s speed and comfort out wide can be very, very helpful, but it remains to be seen whether he can have as big of an impact against top-tier opponents. Both should get in, albeit barely.

A potentially interesting battle will be for one of the last central-midfield roles, and it’s shaping up to be a battle between Mix Diskerud and Darlington Nagbe, assuming he’s healthy. Nagbe has the advantage.

Of course it is worth mentioning that Fabian Johnson could very well see minutes in the midfield. If he does—and U.S. fans should hope he does—one more defender could then be brought along.

The skinny: It is a no-brainer that Clint Dempsey, Jozy Altidore and Bobby Wood will make this team. The final forward spot goes to Jordan Morris — for now.

While the Sounders forward is struggling at the start of his professional career, he has typically done well in the U.S. setup. If Morris’s lacking form continues, though, Klinsmann has a few other options he can explore: Chris Wondolowski is scoring goals for San Jose at a rate that’s high even by his standards, and Klinsmann could elect to move Zardes up as well.

Another late-breaking name to consider is St. Pauli forward Fafa Picault who earned a shoutout from Klinsmann this week after his two goal outing last weekend.

“People wondered why he’s not on the radar for the national team,” Klinsmann said of Picault. “When he left Fort Lauderdale Strikers to St. Pauli, he was already looked at by us. The coach at St. Pauli, Ewald Lienen, mentioned to me a few times that there’s a kid who is extremely hungry and wants to prove a point. He said he has a way to go, but to just follow him. Now over the weekend he scored two goals in a big game in front of 30,000 people and got them really excited. It shows how diverse things are with the U.S. National Team. We have players coming through in completely different channels.

"Picault is a unique player, a counter-break player and very fast. We pay attention to a lot of players out there that maybe think they are not on the radar screen.”

Those are my picks—now it's time to choose yours. Check out ASN's Copa America Centenario Roster Creator, drag and drop your favorites into place, and share your list.