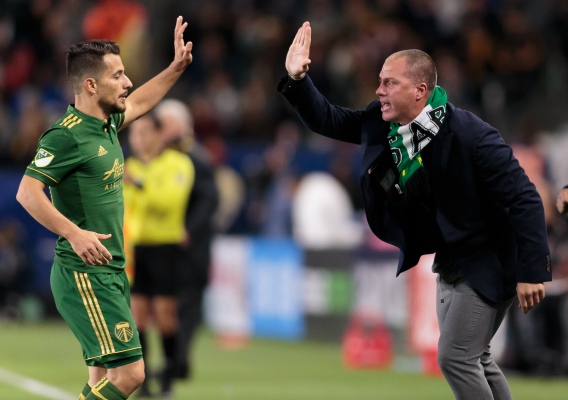 As an MLS legend, Savarese now aiming for coaching success in Portland

Giovanni Saverese has been the embodiment of the American dream and soccer has been his vehicle.. The sport allowed him to move the U.S. and earn a degree. MLS offered him a chance to thrive as a professional and now continue with his coaching career. Next month the Venezuelan will become an American citizen.
BY Brian Sciaretta Posted
April 06, 2018
7:00 AM
MAJOR LEAGUE SOCCER is a far different league in 2018 than it was during the inaugural season of 1996 and the reality is that not much of that era exists anymore. But Timbers coach Giovanni Savarese is an exception. After serving as one of the league's original icons, he is aiming to return the Timbers to one of the league's elite teams.

A native a Venezuela, Savarese had some success in his native country as a young teenager but moved to the United States to play in college at Long Island University. Success there saw him play one year for the Long Island Rough Riders in USISL before joining the Metrostars for the first season in MLS.

Despite being taking in the 9th round of the first draft, tt was there when Savarese’s career took off and became a club legend – scoring 41 goals in 85 games (including the club’s first eight goals, not including an own-goal) and having his name enshrined at Red Bull Arena for the team’s Wall of Fame. It was also during the Red Bulls when he began earning regular callups to Venezuela’s national team where he scored 10 goals in 30 games – including against Argentina in 1996.

After a journeyman career that say stints in England, Italy, Savarese finished his career with the Rough Riders before becoming a coach. First he headed up the Metrostars development program before moving to the NY Cosmos in the new NASL where he became the head coach in 2012 and helped the club win three titles. In 2007 he was elected to the U.S. Soccer Hall of Fame.

With the demise of the NASL, Savarese was quickly hired to run the Portland Timbers after the team parted ways with Caleb Porter. With the Timbers team opening the season with a difficult five game road trip, Savarese’s team has drawn its last two games after two losses to open the season.

ASN spoke with Savarese ahead of Sunday’s game at Orlando City SC.

ASN: After years coaching in the NASL, you have made the transition to MLS. How has that transition been? Was it what you expected? Did anything take you by surprise.

Savarese: I would say a majority of the job is what I expected. I had a good analysis in regards to the league and what to expect. The challenge has been fantastic in the way the club has treated me and the staff. There is no surprise with regards to that. It's what I anticipated and I knew the league really well.

Maybe with regards to the transition regarding our team, again maybe thinking to make a transition that was quicker to something. But again, I understand that it is one step at a time. But I have been very content with the response of the players. But I feel very fortunate to do this job, which is my passion. Overall it's been great

Savarese: The way I see it is if there wouldn't be this struggle - and when I say struggle I mean the first two matches because in the second two matches I saw a lot of positives - but those first two matches allowed me and the staff to see things a lot clearer, to go into depth in many things that are important that are going to make us a better team. Overall there is a good cause for these difficult moments that I believe have to happen for a reason. I am glad they happened now and not later.

ASN: In previous seasons, the Timbers have been a team that relies heavily on foreign players and has generally not signed many homegrown players. With more clubs in the league now using their own USL teams to be a key creator of first-team talent, do you see an increased role for Portland Timbers 2? How much are you working with T2 early in your MLS coaching career?

Savarese: First of all, T2 is extremely important. The USL is a competitive league that allows our players to get minutes and allows all players to develop. We have already done things this year to make sure we thing about that. In the mornings we train at almost the exact same time. We exchange players. We are very closely looking at the players who are training in T2. Besides that, the guys that don't travel with us travel with T2 and they get a game in - which is very important for them to stay game-ready for when they get called up to the first team. That way they can play with us.

ASN: You have spent years coaching in lower divisions of American soccer. How big do you see the gap between USL and MLS? Is the gap narrowing to the point where players in the USL are more ready to make the jump to MLS without a significant struggle?

Savarese: What I can say is that the league has become better. I think there is still a big difference between the better teams and the developmental teams. I believe that even though there is a bigger jump from what the league used to be in quality to what it is now, there is still a gap between Major League Soccer and USL. What I think is that each club has a different scenario where some things are stronger. Some clubs go for youth and that's it. So I think that it is important for us to be in this league for it to continue to go and for us to have players in that league that help raise the level.

ASN: You were an iconic figure in the inaugural season of MLS in 1996. I was actually at the game where your bicycle kick erased a 3-0 deficit for the MetroStars against Tampa Bay and won 4-3 in Roberto Donadoni's debut. When you look back on moments like that in the first year, did you ever envision the league would be where it is now?

Savarese: It was great that you were there and it was a special day for sure. I feel very forutate to have come to this country, first of all, from Venezuela to get a degree. I am very proud of everything the United States has given me. Beig part of the beginning stages of this league that was built in another time when soccer was at a very critical moment, and participating in that, it gives me a very big sense of pride. Being back here now and seeing how much it has grown is a credit to everyone who has worked in Major League Soccer and a everyone who has contributed into the league. It's incredible how much it has grown.

Looking back at that time, we had big crowds and things like that. But what you hope for is definitely what we're seeing now. I am happy we're seeing it and have faith that it is going to continue to grow.

ASN: I know it wasn’t your first time coaching against the Red Bulls at Red Bull Arena, but how fitting was it for you to come back early in your MLS coaching tenure? Do you still feel an attachment to the club when you see your name enshrined at the stadium?

Savarese: It was very special. The first one was against the LA Galaxy where I played my first ever MLS game then going right after to play a club I still have in my heart because I have so many great moments with the Metrostars. I still have my name there so it was a great start. The only bad thing was the results. But I am a firm believer that when you hurt the most and go through difficult times, you understand why you're there and you use that to create something special. Those two moments needed to happen that way to help us be the team we will be this season

ASN: In a way, soccer in the United States has allowed you to live the “American Dream” in terms of employment and education. Is becoming a U.S. citizen in your plans as a way of completing that process?

Savarese: So I was very proud to be an international player for Venezuela and be one of those players the league could have. It gave me more pride to be a Venezuelan representing Venezuela and being able to know that I was able to hold on to one of those [international roster spots] which was difficult. But I was always very thankful for what this country has given me in regards to scholarship and the type of life we have had. The reality is that I never became an American but in a month I will be getting my passport. I will be a U.S. citizen.