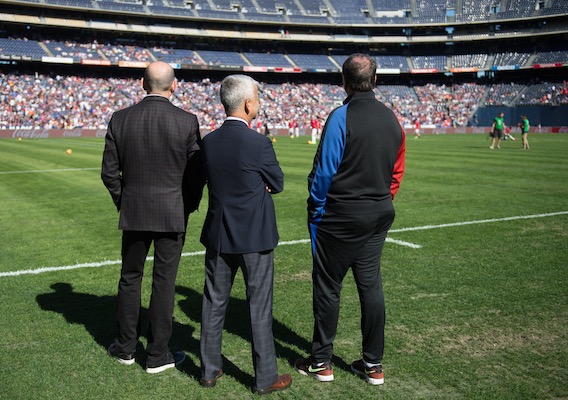 Major League Soccer and U.S. Soccer share many common attributes—hyper-sensitivity to criticism, for starters—but they don't share the same goals. So let's not pretend the two entities should be friends.
BY Franco Panizo Posted
October 11, 2017
5:00 PM

WE ARE ALMOST 24 HOURS removed from the unfathomable catastrophe, and yet the nightmare is only just beginning.

The U.S. men’s national team’s World Cup Qualifying campaign capsized Tuesday, as a perfect storm of circumstances and results eliminated the Americans. The 2-1 road loss to Trinidad & Tobago was stunning and embarrassing on its own, but what the defeat—combined with Honduras’ 3-2 comeback win over Mexico and Panama’s late victory over Costa Rica—meant was even more so.

Why, though, and how?

Because this team inexcusably and pathetically won just three games en route to finishing in fifth place (!) in the Hexagonal. Because a group of mostly veteran players failed to consistently perform up their potential from the start of the Hexagonal to the finish. Because coaching mistakes were made by both Jurgen Klinsmann and Bruce Arena. Because, as Taylor Twellman has pointed out, U.S. Soccer has long carried a mystifying arrogance that is detrimental to the sport in this country.

"Coaching is coaching. No one in Europe knows anything more about soccer than we do." - Bruce Arena

It starts at the top. U.S. Soccer president Sunil Gulati has done a lot of things well in helping grow the commercial side of the program, but the sporting side has long stagnated. Gulati has made several poor decisions even prior to the 2014 World Cup and he has refused to acknowledge them until it is far too late. Take last night as the latest example.

Gulati: “You don’t make wholesale changes on a ball being two inches wide or two inches in...We’ll look at everything.” #usmnt

How on earth can someone with a clue about the sport possibly take that stance after seeing his team crash out of World Cup Qualifying in a, let’s face it, more than forgiving CONCACAF setup?

Gulati deserves a huge chunk of the blame and no doubt he should resign from his post—as many others in his position across the world would do after a cataclysmic failure like this—but he is not solely responsible for this mess.

Major League Soccer and its commissioner, Don Garber, also need to shoulder some of the responsibility here. U.S. Soccer and MLS have long been in bed with one another, two separate entities often attempting to operate as one for the supposed betterment of the game in this country. Yet what is good for MLS and its clubs in some circumstances may not necessarily be good for the national team.

You need to only look at Klinsmann’s run-in with Garber from a few years ago for proof. You might remember Klinsmann being, understandably, critical of his players for coming back to MLS. You might also remember Garber hastily throwing together a conference call with reporters to rebuke Klinsmann’s comments.

Why, though, is it a national team head coach’s job to promote said country’s domestic league? Why does that manager have to have flowery opinions about the league? Why is being critical of MLS bad for the sport? Why is this the line of thinking from Garber, one of our supposed soccer leaders?

Again, it all comes down to U.S. Soccer and MLS being too codependent when they frankly don't need to be. Different entities have different goals. That's OK. Forcing them to have to find a middle ground is not, not if soccer in the United States is to avoid disasters like Tuesday’s and grow at an improved rate. It is not an insult to believe that the very best Americans need to go to Europe to take their games to the next level, just as it is not a slight to want to have the best U.S. players in the league so as to raise its quality and exposure to local fans.

It's time for MLS and U.S. Soccer to separate and operate without needing to hold the other’s hand, just as it is time for them both to take criticism a little better. The two entities like attention and want exposure, but only when it is positive. They repel or are dismissive of reproach, from fans and media alike, and think that they are the ones that always know best. That is about as arrogant as you can get.

Arena on Concacaf qualifying road: 'I would love to see one of these hotshot teams from Europe come and play it.'

Hopefully Tuesday’s mind-numbing disappointment and the dawning realization that the Americans will not be competing in Russia next summer will bring about needed change. U.S. Soccer needs it badly, even if it still refuses to see it.