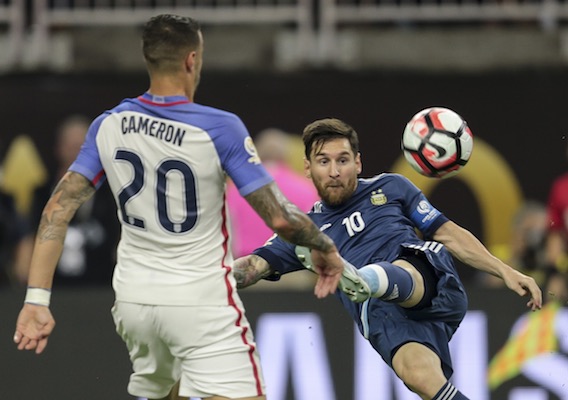 Lionel Messi set up Ezequiel Lavezzi for a third-minute goal and then iced the game with a stunning free kick at the half-hour mark, leading Argentina to a 4-0 win over an outclassed U.S. side.
BY John Godfrey Posted
June 21, 2016
11:00 PM

EXCITEMENT MOUNTED in the build-up to the U.S. men's national team's Copa America Centenario semifinal clash with Argentina, the No.1-ranked team in the world. You could feel it in NRG Stadium in Houston. You could feel it all over the Internet. American soccer fans wanted something to feel good about, and were hoping for a reason Tuesday night.

Would Jurgen Klinsmann send out a proactive lineup and encourage his men to go toe-to-toe with Lionel Messi and his talented teammates?

Klinsmann instead chose to play it safe, selecting 34-year-old midfielder Kyle Beckerman and 33-year-old forward Chris Wondolowski to his Starting XI, thereby sending a message to the world that the U.S. would try to bunker and hang on against the Albicelestes. And it failed—miserably.

Messi scored a goal and assisted on two others to give Argentina an emphatic 4-0 win over a thoroughly humbled U.S. side.

Just three minutes in, U.S. right back Fabian Johnson tried to dribble out of the U.S. zone but was dispossessed by Ezequiel Lavezzi on the edge of the U.S. penalty area. Tragically for the Yanks, the ball fell straight to Messi and the world's best soccer player promptly lofted a pass back to Lavezzi, who made a smart run into the box.

The closest defender on the play, Beckerman, couldn't decide which way to turn or who to follow. Brad Guzan thought about charging the ball but got stuck in No Man's Land.

Unmarked, Lavezzi headed the ball into the back of the net to give Argentina a 1-0 lead.

In one play the visitors established themselves as the more aggressive, more decisive, more technically gifted side. For the entire first half, Argentina completely dominated the match.

Twelve minutes later, U.S. captain Michael Bradley gave the ball away in the center of the pitch—to Messi, no less—and Argentina pounced. The Barcelona icon dribbled through some desperate American defenders and blasted a left-footed shot on goal.

Guzan stopped this one, but it silenced the Americans on hand. This could get ugly, they realized—Chile vs. Mexico ugly.

And at the half-hour mark, the U.S. fell further behind.

Wondolowski, always a curious choice to start, gave the ball away to Argentina in a dangerous spot and then tried to make amends for his gaffe by chasing down Messi and tackling him. The San Jose Earthquakes striker earned a yellow card for his efforts and gifted the visitors a free kick 27 yards out.

Messi knelt down, tied his shoe, stepped up to the ball, and launched a brilliant curling shot that flew over the U.S. wall and into the upper corner of Guzan's goal, doubling Argentina's lead.

The rout was on, and given Argentina's sustained possession and intense defensive pressure, the Yanks were lucky not to concede any more goals before the break.

As the second half got under way, Klinsmann took out Wondolowski and replaced him with 17-year-old Christian Pulisic, a fearless, attack-minded midfielder with impressive technical skills.

Would it be too little, too late?

Four minutes after the restart Gonzalo Higuain made a perfectly timed run, beat U.S. defender John Brooks to a cross, and pushed a shot past Guzan to give the Argentines an insurmountable three-goal cushion.

Not even Brooks, who had performed heroically for most of the tournament, was immune from the American malaise.

In the 63rd minute, Brooks stood eye-to-eye with Messi with the ball at his feet. Clearly intimidated, the Hertha Berlin defender stopped, started, stopped again, and then sort of stumbled over the ball before giving it away to Messi, who immediately mounted an attack on the U.S. goal.

Brooks' horrific turnover did not lead to another Argentine score, but it might as well have. The game was already over.

Klinsmann took Beckerman off at the one-hour mark in favor of Steve Birnbaum, who slid into central defense and pushed Geoff Cameron into the midfield.

Klinsmann subbed out his best attacker, Clint Dempsey, in the 77th minute and brought Nagbe into the fray.

In the 83rd minute the Americans committed yet another unforgivable turnover at the edge of their penalty area—it was part Bradley's fault, part Birnbaum's—and Messi once again took advantage. The Barcelona star cut left and then passed right, to Higuain, who tapped the ball into the back of the net to complete the scoring.

The U.S. did not manage a single shot on goal. It was complete annhiliation. While Klinsmann's men did not give up seven goals, like Mexico did in its quarterfinal match, there was nothing positive about the performance from a U.S. point of view.

Argentina will go on to play the winner of Wednesday's Chile-Colombia game on Sunday in East Rutherford, N.J. while the U.S. will face the loser of that match in a third-place game on Saturday night in Glendale, Ariz.

What did you think of the U.S. performance? Still proud of how the U.S. played throughout the tournament? Share your take below.