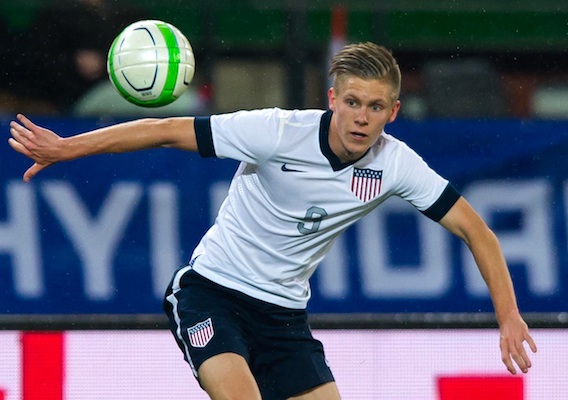 Are We All Onboard the Aron Johannsson Express?

The Icelandic-American scored his 20th goal for AZ Alkmaar Tuesday, once again showing that he should be starting for the United States national team—now, in Brazil, in Russia, and maybe even in Qatar.
BY John Godfrey Posted
January 21, 2014
9:40 PM
A LITTLE WHILE BACK I wrote this, and was roundly ridiculed for it. Not by the competition, mind you—by my own team. Noah Davis. Jon Arnold. Ryan O'Something. They tore me a new one and shared it with the world. Thanks, guys. Of course, I only bring this up now because there's a growing possibility that I was right. In fact, I feel compelled and emboldened to say it again: Aron Johannsson will start for the United States national team when it lines up against Ghana on June 16. I've never been more convinced of this eventuality. How could he not? Just look.
Highlights Roda AZ 0-2 by goalsandmore OK, Johannsson's domestic cup strike may not be the sort of goal that makes you forget about Zlatan's most magical moment.... ...or Paul Caligiuri's.... ...but you've got to love the sheer nonchalance of it all. Was there any doubt that the AZ Alkmaar sniper would put this opportunity away for his 20th goal in all competitions this season? No. There was not. He almost looked bored as he guided the ball into the far corner. Johannsson is the most clinical striker in the U.S. player pool, and by a wide margin. Jozy Altidore is officially streaky, and often stone-footed, and he requires high-quality service to produce goals. I have no idea who or what Clint Dempsey is right now. Eddie Johnson is a blunt instrument—a lethal header of the ball who should not see any Brazilian pitch before the 80-minute mark. Herculez Gomez is a relentless worker and a joy to watch, but I'm going to need to see a ton of production between now and June to consider him a candidate for a starting spot in the 2014 World Cup. The only player who might give the Iceman a run for his money is Landon Donovan, but I consider Donovan a midfielder at this point in time. So, what say you? Johannsson is already on the plane to Brazil—is he a starter? Tell me what you think in the Comments section.