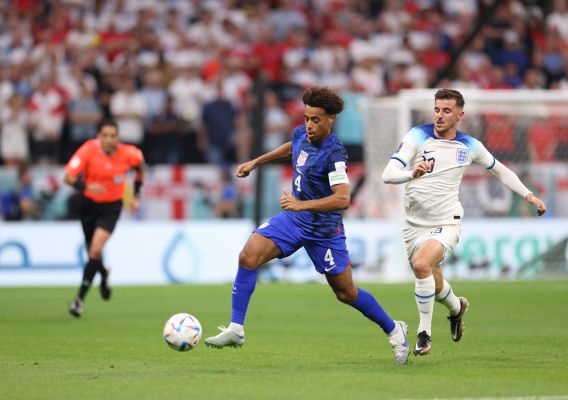 Analysis: USMNT and England fight hard to a 0-0 draw in Qatar

In what was a game circled on the calendar for many fans, the United States and England played to a 0-0 draw in Qatar and it set the stage for a pivotal game on Tuesday against Iran where the USMNT can only advance if it wins. ASN's Brian Sciaretta offers up his thoughts and analysis of the draw against England
BY Brian Sciaretta Posted
November 25, 2022
1:00 PM

THE UNITED STATES played England to a 0-0 draw on Friday in a game where the Americans played well for long stretches, showed heart, but also raised the stakes for Tuesday where Gregg Berhalter’s team must win against an upstart Iranian team to advance to the knockout round.

The U.S. team had nearly the same starting lineup to the one that drew Wales in the opener on Monday. The only change is that Haji Wright earned the start at central forward over Josh Sargent. It was a risky strategy for Berhalter who played Weston McKennie and Sergino Dest on yellow cards knowing that a yellow for either would have them suspended against Iran.

England controlled the game early, but the U.S. team grew into the game. In the 26th minute, Weston McKennie skied a shot off cross from close range. In the 33rd minute, Christian Pulisic hit the cross bar from about 8 yards out.

Defensively the U.S. was mostly strong throughout. Walker Zimmerman had a huge block in the 10th minute on a close shot from Harry Kane. Then in first half stoppage time, Matt Turner made a diving stop on Mason Mount to keep the game scoreless. 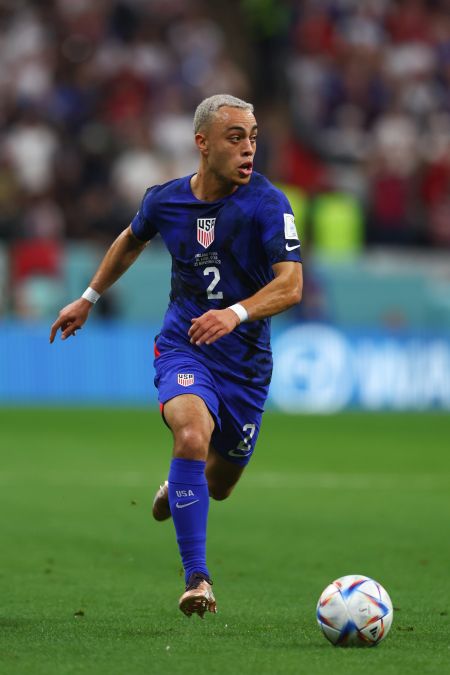 The second half did not have nearly as much action as the first half. England had a strong run for 15 minutes from the 60th to 75th minutes before the U.S. team was able to make changes. The U.S. team had a wave of corners but again struggled to make anything out of it.

The final 10 minutes were largely uneventful, and the U.S. team left with a 0-0 draw.

Unlike the Wales game, the U.S. team showed maturity in closing out the game and conceding a late goal.

It was the sign of a team growing in maturity and learning lessons over the course of a tournament.

"You have to have 26 guys who are bought into the process in order for it to work. You can see the belief tonight."
- @Tyler_Adams14 pic.twitter.com/NeSESnLjup

A win would have been massive for the United States. On paper, the difference between a draw and a loss doesn’t matter significantly. The only difference is that the U.S. team is guaranteed to advance to win and does not need any help from the England-Wales game.

But that is on paper. In reality, preserving a draw in this game was absolutely critical for the U.S. team. The confidence it gave this young team was obvious. The U.S. team went toe-to-toe with England, and most would say that the performances from the teams was even. This was not the case of a team getting outplayed but bunkering its way to a 0-0 result. The U.S. team had just as many big chances to score as England did.

It was also a display of heart. The U.S. team wasn’t intimidated, and it played with a lot of heart and fearlessness in going at a very good English team.

Against Wales, Tyler Adams was the best player on the field. Against England, the U.S. team needed Tyler Adams to step up, but they also needed more from Yunus Musah and Weston McKennie.

In total, they got what they needed from all these players along with Brenden Aaronson off the bench. The U.S. controlled the midfield for impressive stretches against England.

What is important to note about the midfield is the impressive two-way play that the team put forth. This has been one of the biggest stories for the U.S. team in the first two games is the commitment to defense in the midfield. They have been winning second balls, forcing opponents to turnback and be conservative in possession as opposed to making a break.

England was limited in their ability to move the ball through the midfield, and this made the clean sheet far easier. 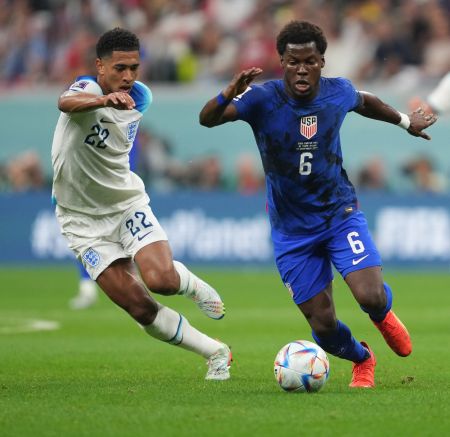 In terms of the midfield with the ball, it was impressive with Adams once against with a complete performance. The U.S. team is almost always in good shape when Adams gets north of 60 touches and that was the case in this game.

McKenne had a very surprising performance given that he faded substantially in the second half against Wales and missed most of the past month for Juventus. But there was absolutely no signs of rust or fatigue in this game. McKennie was in top form, especially in the first half although his 26th minute miss was certainly one he would want to have back.

It was a big gamble for Berhalter to have started McKennie in this game given the risk of a yellow card, but it paid off and McKennie should be in great shape for the game against Iran. 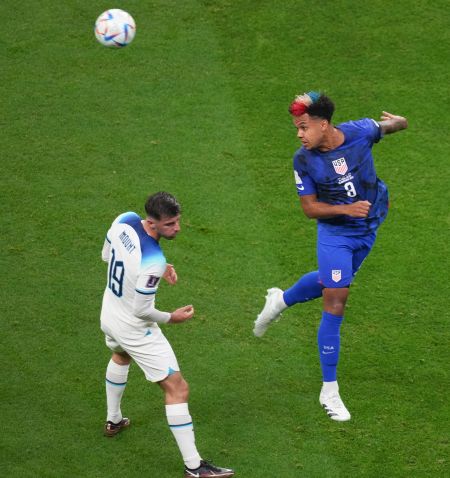 As the stats would suggest, Musah needs to get on the ball more. He’s still very young and is a big part of the team’s future but expectations are high for him at this tournament. While the final ball from him is still a work in progress, his dribbling is tough to stop and getting him involved more (especially in counter attacks) should be a goal of the team in the rest of their games. It seems like an area of untapped potential.

The U.S. team surprisingly went with a Tim Ream – Walker Zimmerman pairing in central defense despite the two having rarely played together. Ream, 35, had been left off the team for the past 14/15 months before this tournament but played his way not just back into the team but also into the starting lineup.

Ream has been one of the most positive and surprising stories on the U.S. team. He is playing so well and you can sense the maturity he brings defensively. He’s been calm on the ball and in this game, he was wise in his decision making to get forward and how to the ball forward. 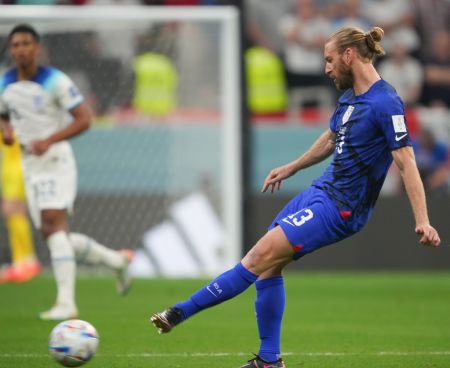 Before the tournament started, Ream told ASN that he thought his partnership with Antonee Robinson that he has at Fulham would benefit the U.S. team. That has played out in a big way and the two have connected several times in getting the ball into good positions on that side.

As for Zimmerman, he had the big mistake against Wales on the penalty but aside from that, played well leading up to that point. In this game, he was much better defensively. His block on Kane in the 10th minute denied England one of their two best chances in the game. He missed on some of his attempts to pass the ball into advanced positions and that needs to get better.

Overall, the pairing is gelling quickly – and that is good. This pairing would probably have been in better shape had they been playing together in meaningful minutes throughout 2022. But given where pairing is now learning their chemistry on the fly, one goal over 180 minutes at the World Cup is a positive.

Through two games, I think the general concerns that fans have had over center forward for this entire cycle have proven to be valid. Josh Sargent couldn’t get a close-range header on target in the opener against Wales and that was the team’s only real dangerous chance aside from the goal.

Haji Wright got the start against England and generally was lackluster. He had just 18 touches over his 83 minutes, completed six passes, and didn’t force a save in either of his two shots (the first was a header missed wide and the second was a blocked shot). 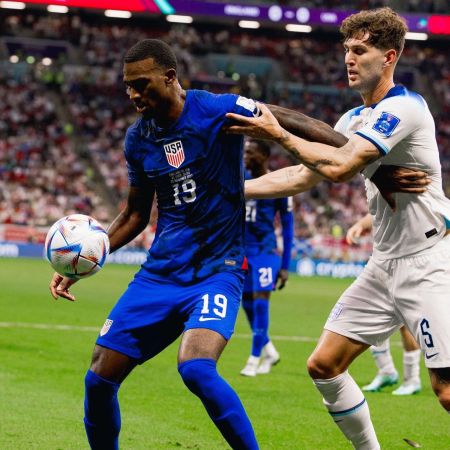 I would expect there is a good chance with Berhalter going with either Jesus Ferreira or revert to Sargent in the group finale against Iran. Ferreira doesn’t give the size or strength, but he will get on the ball more and connect with the wingers.

Sargent, however, could give the U.S. team more of a presence in the box at a time when Iran will be sitting deeper as they need just a draw to advance.

One goal over 180 minutes is not great and the team just hasn’t been sharp enough with its final pass to set up big, high-percentage chances. Aside from the Pulisic-Weah combination for the goal against Wales, the U.S. has had the ball at its feet making runs into the attacking half, but the final ball hasn’t been there that sets up the chances.

England did very well defending these chances. They made key interceptions to balls up the wing and they were well positioned when the U.S. had the ball in the box. 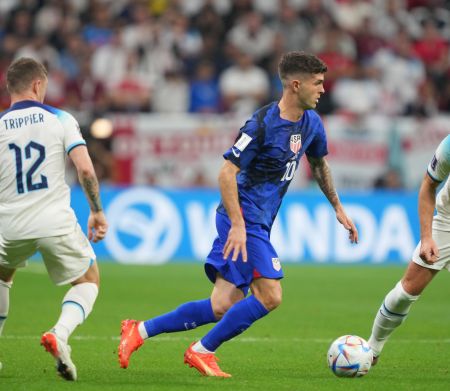 Clicking against Iran is going to be a different challenge all-together. If Iran tries to go right at the U.S. team the way England did, Iran will struggle since it will be tough for them to make the same smart defensive plays in the open field. But Iran only needs a draw to advance, and they are going to sit back. For the U.S. team, they are likely to be tasked with breaking down a compact defense and that is something they have yet to face in Qatar.

It is likely going to take things like good crossing, set pieces, or dribbling in the box to break down the defense. Of course, if the U.S. can score first, the dynamic of the game changes completely. But this could be a good game for Gio Reyna as opposed to Brenden Aaronson who thrives in the open field.

The U.S. has the tools to generate more chances than they have previously in this tournament but it is going to take someone rising up and being the hero ala Brian McBride, Landon Donovan, John Brooks, and Clint Dempsey of previous generations.