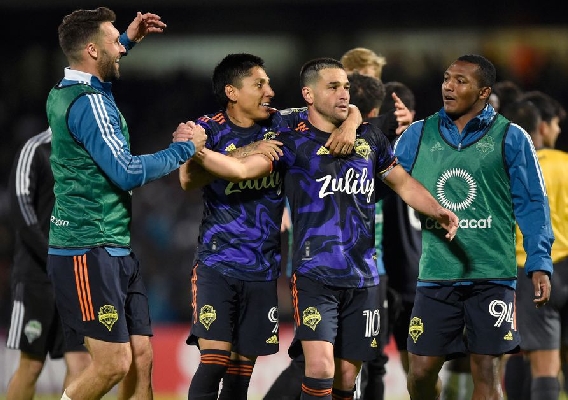 Analysis: Seattle rallies to force a 2-2 draw with Pumas in a wild first leg

It was a wild game that will take a lot of time to digest. But ASN's Brian Sciaretta offers up this thoughts on the first leg of the Seattle Sounders - Pumas CCL final where Seattle drew two late penalties to force a 2-2 draw in Mexico City.
BY Brian Sciaretta Posted
April 28, 2022
12:05 AM

IN ONE OF THE most dramatic and controversial games in the recent history of the CONCACAF Champions League, the Seattle Sounders rallied for a 2-2 draw with Pumas UNAM in the first leg of the final in Mexico City. In a game loaded with three penalties – one was allowed to be retaken after a miss – the result was probably fair.

Seattle was able to field its strongest lineup with all of its top players available – Stefan Frei, Raul Ruidiaz, Cristian Roldan, Jordan Morris, Joao Paulo, and Albert Rusnak were all in the starting XI.

It was a tough environment for Seattle as the game was played in driving rain and in the high altitude of Mexico City.

Seattle began the game well but it was Pumas who drew first blood when Juan Ignacio Dinenno was judged to have been fouled in the box by Xavier Arreaga – a call upheld by VAR. Frei, who has been incredible this entire tournament, saved the first attempt by Dinenno but VAR ruled he was off his line – by a mere inches. The second attempt was successful.

Seattle continued to push forward but trailed 1-0 at the half.

Sounders came close to equalizing before half ???? pic.twitter.com/D3dH4mUJ3l

Dinenno put Pumas up 2-0 in the 48th minute when he got his head on a beautiful cross by Jesús Rivas, the 19-year-old who replaced starting right back Alan Mozo after Mozo was injured at the end of the first half.

Seattle continued to rally and push. Unlike many other MLS teams which struggle at the end of games in Mexico City due to altitude, Seattle found another level.

In the 77th, VAR awarded Seattle a penalty when former Real Salt Lake and U.S. U-23 attacker Sebastian Saucedo was called for a handball. Nicholas Lodeiro stepped up and converted.

?? Nicolás Lodeiro takes one back for the @SoundersFC at 77'! | #SCCL22 pic.twitter.com/mgxfVhVckT

The deep into stoppage time, Cristian Roldan drew a penalty after it was determined Efrain Velarde founded the U.S. international on the edge of the penalty box. Again, Lodeiro took the ensuing penalty and drilled home the equalizer.

Nicolás Lodeiro scores again from the penalty spot and ties the score at ‘90+9! | #SCCL22 pic.twitter.com/BqmfONxori

It was a stunning comeback that now sets the stage for everything to be determined in Seattle next week given that the away goal rule is not in effect in the final.

In the end, the tough calls evened out. The penalty awarded to Roldan at the end was fair. It was completely unnecessary from Velarde as Roldan was not in a dangerous position. But Roldan was in the box and Velarde kicked him across the abdominal region. There is no way that is not a penalty. 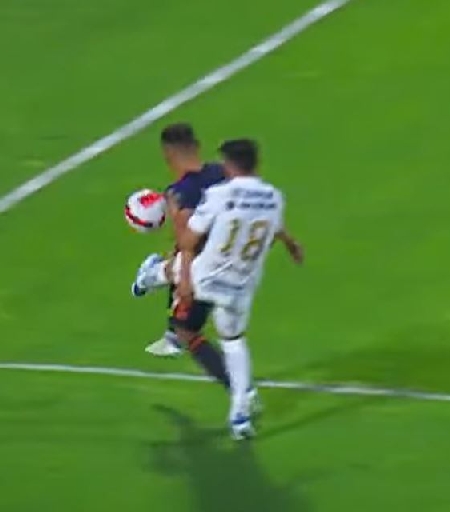 The initial penalty for Pumas and the first Seattle penalty I am unsure about.

Dinenno lost possession and the contact seemed to be incidental after possession was lost thanks to a clean defensive play. Allowing the retake was tough for Frei, but it was in accordance with the rules. Calling the initial penalty was tough.

The first Seattle penalty was also tough. The handball on Saucedo was correct but in the build-up off the corner kick, it did appear that Arreaga was guilty of a foul.

From the way I saw it, both teams benefitted from tough calls. I understand the complaints of the officiating, but I didn’t think any team overly benefitted.

Seattle was better from the run of play

Overall, I felt that Seattle was the better team from the run of play. The possession was about even but Seattle had more shots and big chances (4-2).

Seattle was unlucky not to score on either of Joao Paulo’s chance at the end of the first half, or Raul Ruidiaz’s chance in the 51st minute after Roldan set him up with a cross for a point-blank shot. Alfredo Talavera made a great save but Ruidiaz clearly should have done better.

Finding another gear in Mexico

How Seattle was able to rally and not wilt in Mexico City was the true story of this game. Mexico City has typically been where American teams fade badly in the second half. When coaches often say after wins that his team “never quits” it is typically a cliché. In this game, there seems to be a lot more truth to that.

“What I always appreciate about our team is that we never quit,” said Schmetzer. “The culture of the club has always been there…What we will try and do is take what we learned from this game and then apply it to the game in Seattle." 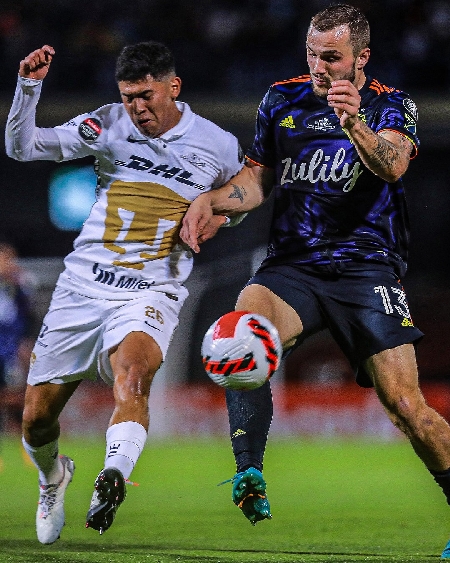 On top of it all, the pressure that both these teams have is enormous. Seattle is attempting to become the first MLS team to win this tournament while Pumas is attempting to keep the Champions League in Mexican hands.

The gap is clearly closing. MLS team are winning more and more against Liga Mx teams in the earlier rounds, but lately there has always been one Liga Mx team that is out of reach.

Lodeiro and Roldan have taken their games to another level in this tournament. Roldan has five assists, could have had a sixth, thus far in the Champions League. He also drew the critical penalty at the end by getting himself into a dangerous position. 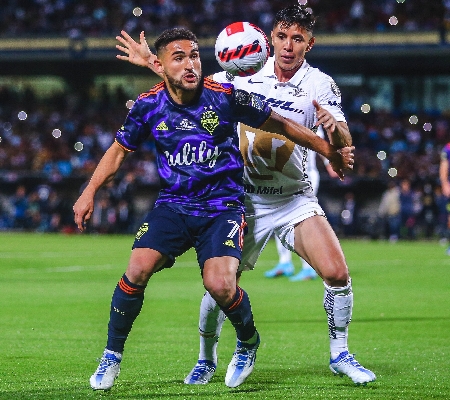 Against Pumas, Roldan won 7/9 of his ground duels and won 4/7 in aerials. He also drew five fouls (one for a penalty) after taking a total beating over 90 minutes. He was extremely important in helping Seattle.

As for Lodeiro, he has been one of the best imports in the history of the league. The stone-cold delivery on both of his penalties was impressive.  He creates, he scores, he opens games up, and he plays defense. He’s 33 and is nearing the end of the run. But if he can win next week, it will be the ultimate feather in his cap.

“I have to be prepared,” said Lodeiro. “We prepare for this. I have to have peace of mind and confidence that I’m going to be able to deliver. That’s what the team is expecting, and that’s what we are preparing ourselves to do all the time. Having that confidence that we’re going to execute helps us to be successful when taking PKs.” 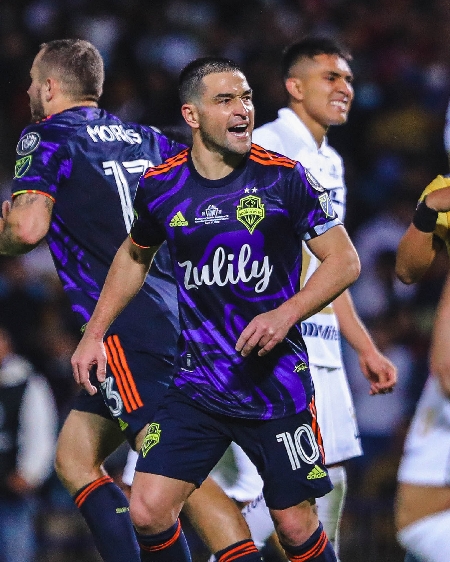 Looking ahead to the second leg

The second leg will be a grand display. Lumen Field will probably be sold out and there will be a lot of Pumas supporters there as well. Seattle won’t play this weekend as MLS has adjusted the schedule to allow Seattle to fully focus on this game. Pumas, meanwhile, hosts first-place Pachuca on Sunday.

One haunting note comes from ASN contributor Arch Bell who correctly points out that for all the concerns people have with MLS teams in Mexico, it’s been the home leg that has let them down.

He tweeted this before Seattle’s draw in Mexico.

Definitely one of the quirkiest stats when it comes to CCL two-legged finals is that MLS teams are unbeaten in 3 previous final legs on Mexican soil. 1W-2D. The downfall has been the home leg. 3 losses. Something to keep in mind ahead of tonight’s first leg in CDMX.

So now, in the last four times an MLS team has been in the final, the Liga MX team as not won in Mexico. MLS teams have gotten the necessary result away in Mexico. The downfall has always come at home – where MLS teams deal with increased expectations.

This Seattle team is wise and smart, but will that be enough?