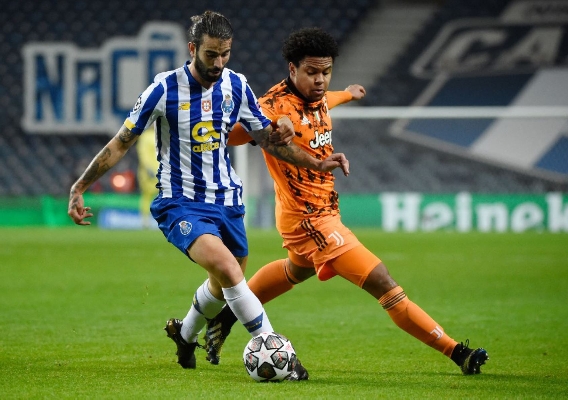 It was a tough start to the knockout rounds of the Champions League but the news was mostly positive elsewhere for American players. ASN's Brian Sciaretta walks you through it all with the news from both on and off the field.
BY Brian Sciaretta Posted
February 17, 2021
6:55 PM

THE CHAMPIONS LEAUGE round of 16 began this week and thus far, Americans have not fared well. The past two days have seen Tyler Adams, Sergino Dest, and Weston McKennie play but each of them suffered a first-leg loss. Meanwhile Gio Reyna’s Borussia Dortmund came up with a big win, but the top teenager remained on the bench.

Champions League games were far from the only games involving American players his past midweek but these were among the sports biggest spotlights and it left a lot to take in.

Regarding Reyna not playing for Dortmund in a 3-2 away win over Sevilla, it was probably coming. The U.S. national team attacking midfielder/winger has not been playing particularly well since Lucien Favre was fired in December and Dortmund has been struggling in the Bundesliga. It was only a matter of time before there was a shake-up and with the team playing well with Reyna on the bench, Reyna will have to work hard to earn his spot back. He will get chances, but it will be up for him to take them.

Elsewhere, the Championship and lower tier English leagues were full of games and plenty of Americans in these leagues have found themselves in promotion and relegation battles that are worth keeping an eye on. Also, in Belgium, the growing number of American players in that country’s top flight were also in action.

Here are my thoughts from the games

Adams, 22, played at right wingback in this one and while that is not his preferred position, played pretty well. Unfortunately for Adams and Leipzig, Liverpool came away with a 2-0 away win to take firm control heading into the second leg. 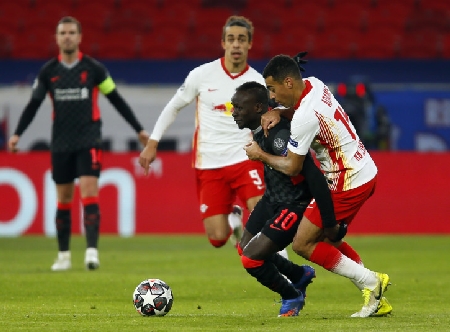 Adams wasn’t at fault for either of Liverpool’s second half goals and even created two good scoring chance – with only finishing letting him down for an assist. Playing out wide, it was tougher for him to make as much of an offensive impact (his passing was a mediocre 33/48, while it created decent chances) and he was effective defensively. But playing Adams out wide doesn’t maximize his ability to cover enormous amounts of ground in the middle of the field to break up plays and win possession. 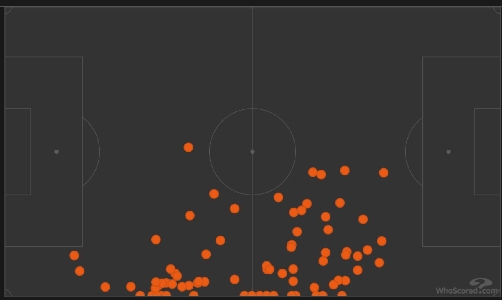 Coming back against Liverpool after dropping a home leg 2-0 is going to be a very difficult task for Leipzig. It’s not impossible but I am sure most Leipzig fans will be turning their attention to ensuring the club remains in second in the Bundesliga to return back to the Champions league next season.

While catching Atletico Madrid is probably not realistic, Barcelona’s fate in La Liga has been improving in recent months and the club advanced out of tricky group in the Champions League last year. Opening the knockout stages at home against Paris St. Germain, while not easy, should have given hope to Barca supporters that the quarterfinals were reachable.

After Tuesday, it’s going to take a miracle. Kylian Mbappe showed why his is probably the best player in the world right now with a hat trick to lift PSG to a 4-1 win returning to France. 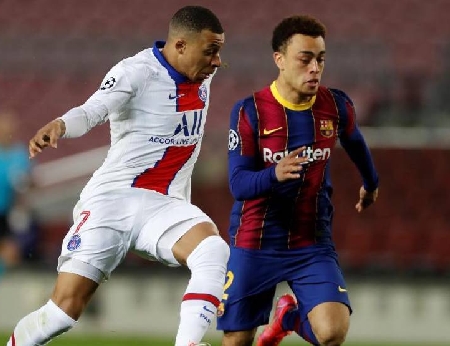 Sergino Dest, who had missed time recently with thigh problems, started in this one and struggled mightily to contain Mbappe. He was pulled in the 71st minute shortly after PSG took a 3-1 lead. It was a rough day for Dest and while no Barcelona player performed at an elite level, Dest was put in an tough position to defend Mbappe.

Partly due to manager Ronald Koeman’s tactics and partly due to his own struggles and the struggles of the team, Dest simply hasn’t been able to get forward effectively much for Barcelona. For the Dutch-born Dest, that is his top strength as a player and what made him standout at Ajax. Against PSG, he had just one touch in the final third of the field. Thiis is his touch map, attacking right. 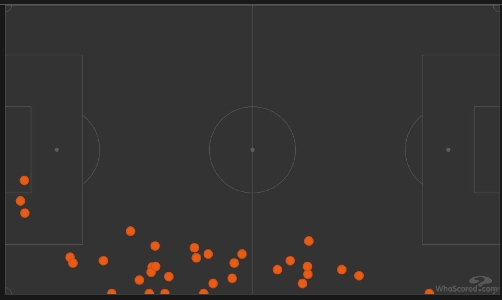 It will be interesting and telling to see how that changes this summer and if Barcelona make a change at manager. The club will likely make a lot of moves and how that will affect Dest remains to be seen.

Mckennie and Juve fall to Porto

Between the three Americans to play this week in the Champions League round of 16 knockouts, Weston McKennie had the best performance. The Texan started for the Italian champions in the opening leg away at Porto.

Unfortunately, for Juventus a drastic mistake cost them the opening goal early and it never fully recovered. Porto scored again early in the second half as well before McKennie was taken out in the 63rd minute. Juve scored in the 84th but dropped this leg 2-1 and now will have to return home needing a big performance in Turin. 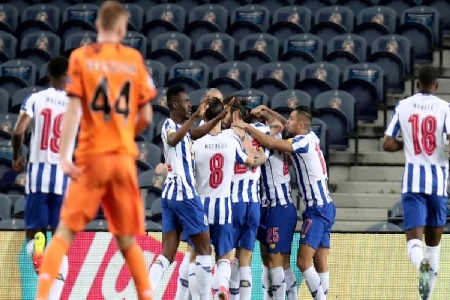 McKennie, 22, was one of better midfield players for Juventus and he lined up in the center-left of the midfield. He was able to press pretty deep into the attack and make effective defensive plays. In the end, he was taken out as Andrea Pirlo wanted to reshape his midfield after falling behind by two goals.

His touch map (attacking left) shows that almost all of his touches were in the attacking half. 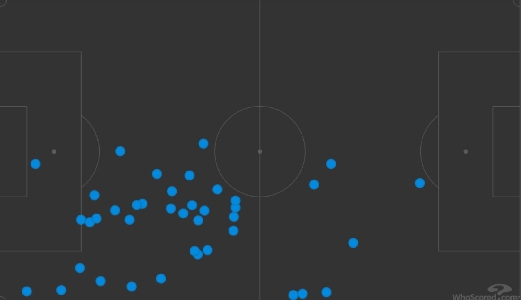 Heading into return leg, Juventus needs to rally but the task is more manageable than that of Dest or Adams. McKennie still played well in this game but regardless, his early hook and the loss for Juventus capped a tough week for Americans in the prestigious competition.

Matarazzo to get an extension

Outside of the Champions League, there was a lot of big news to go around. Tops among them was that American manager Pellegrino Matarazzo is set to sign an extension to remain with VfB Stuttgart through 2024. This is his second extension since last summer and the news was reported by Bild.

Bild reporting that American manager Pellegrino Matarazzo will be given another extentsion at VfB Stuttgart running through 2024. The Fair Lawn, NJ native and Columbia grad has been very successful since taking over the club last year https://t.co/VHSHV88EWh

Matarazzo, 43, has succeeded in his first head coaching job. Hired by Stuttgart during the 2019/20 winter break, the New Jersey native guided the club to promotion and he now has them safely in midtable – pushing for a spot in the top 10 this year. His Stuttgart team hasn’t been just scrapping by in the Bundesliga, they play an attractive attacking style that has been very effective at times.

Mark McKenzie, 21, earned the start for Genk on Wednesday in an away matchup against Oostende. The result was a tough 3-1 loss for Genk but McKenzie was not directly at fault for any of the goals. McKenzie’s central defense partner, Cuesta Figueroa, conceded two penalties in the first half and was subbed out in the 36th minute after the second. Figueroa had two red cards in January for Genk as well.

On the first penalty, McKenzie was a little slow to react on the play before Figueroa’s penalty but clearly did not bear most the responsibility. Genk went on to fall 3-1 and the third goal was a big shot from distance where Genk failed to close down on the shooter, Arthur Theate. Genk remained in third place with the loss but four teams are now within striking distance with a win and a Genk loss. 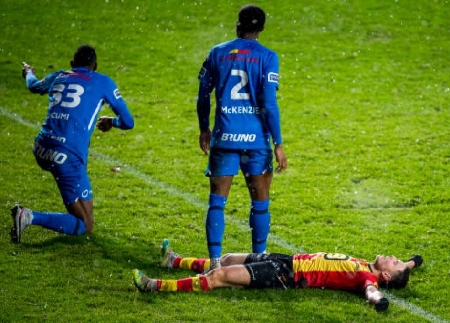 McKenzie played well, despite the loss. His passing was on the mark and he completed a very healthy 6/8 in his long balls. He committed no fouls and won 8/10 duels and was 5/5 in aerials. Combined with five clearances, McKenzie had very good numbers despite the tough result.

In the Championship, Daryl Dike, 20, played the final 35 minutes for Barnsley in a 2-1 win over Blackburn Rovers. The game was scoreless when the forward on loan from Orlando City entered the game. While he played just 35 minutes, some of his numbers standout.

Over 35 minutes, Dike was involved in 13 aerials and 21 duels. The Oklahoma native was forcing himself into battles for the ball nearly once a minute during the time he was on the field. Physically, he is eager to impose himself and take defenders on in a league known for his physicality. Barnsley moved into 10th place with the win.

Expect Dike’s playing time to increase in the weeks ahead through the end of the season.

In the Premier League, Antonee Robinson played the final 11 minutes for Fulham in a 1-1 draw with Burnley. Robinson did not do much in his time on the field and will have to continue to work hard for playing time following Fulham’s strong win over Everton when he did not play. Tim Ream was an unused sub for Fulham once again in this one.

In the Championship, Jordan Morris played the final 23 minutes and Paul Arriola played the final seven minutes for Swansea City in a 1-0 win over Nottinham Forest. Both were on the field but not involved in Connor Roberts’ winning header in the 87th minute. The fact that Swansea City played well late in this game probably means both Americans will continue to play and this win was huge for the club’s promotional hopes. Swansea is in third, one point behind Brentford and five behind Norwich City but has played two fewer games than both teams it is chasing. 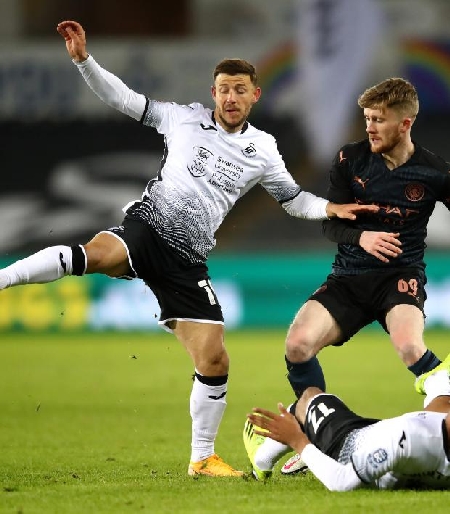 On Tuesday in the Championship, Duane Holmes started for Huddersfield and played 56 minutes in a disappointing 2-1 loss to Middlesbrough. Holmes is still looking to regain his from midseason in 2019/20 when he was at Derby County under Frank Lampard.

It is going to be really interesting for Carter-Vickers who has played for six different Championship teams but is finally in his first promotional hunt as Bournemouth has a six point cushion on sixth place and the final spot in the promotional playoffs. He is only at the club on loan, but can he secure a permanent deal? It would be positive for him if he can finally establish roots. Between last season’s loan at Luton Town and his promotional hunt this season, he is playing his best and most consistent soccer of his career.

Queens Park Rangers hosted Brentford in the Championship and posted a huge 2-1 win over the second-place team. 2014 U.S.World Cup defender and QPR captain Geoff Cameron started and put in a very strong outing while U.S. U-20 forward Charlie Kelman did not get off the bench in the winning effort. 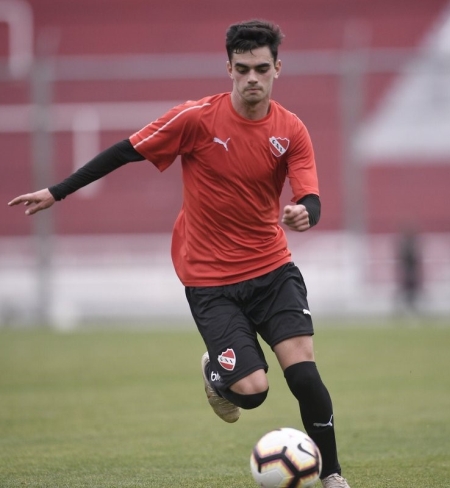 In Argentina, New Jersey-born midfielder Alan Sonora started and struggled for Independiente in a 0-1 home loss to Lanus on Tuesday night. This was the opening round of the 2021 Copa Liga Professional – renamed the Copa Diego Maradona after the legend’s death in 2020.

Finally, Chris Richards missed Hoffenheim’s draw with Borussia Dortmund over the weekend after picking up a knock in training the day before. But the Alabama native is back on the field training Wednesday ahead of Thursday’s Europa round of 32 knockout game against Molde and Sunday’s Bundesliga game against Werder Bremen.