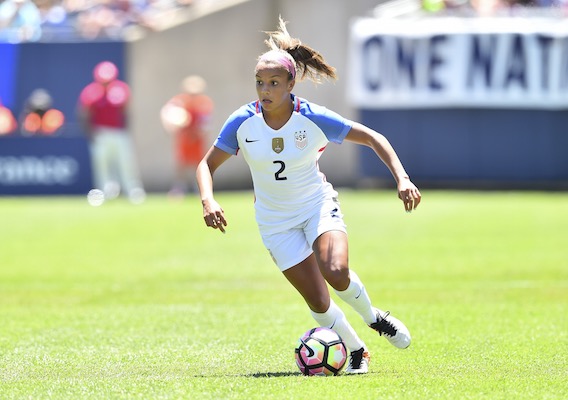 Mallory Pugh broke loose on the left flank and delivered a lovely cross that Crystal Dunn slammed into the back of the net, giving the U.S. women's national team all it needed to beat South Africa in Chicago.
BY John D. Halloran Posted
July 09, 2016
4:20 PM

Head coach Jill Ellis started a familiar side in the game, retaining nine of the 11 starters who beat Japan 2-0 last month in Cleveland. On Saturday, Mallory Pugh and Lindsey Horan returned to the starting XI, while the coach dropped regulars Morgan Brian and Tobin Heath—both of whom are recovering from minor hamstring injuries.

Right from the beginning the U.S. looked to be off to a quick start. In the first minute of play defender Meghan Klingenberg found Christen Press at the top of the 18 with a long pass. Press turned her defender and went in on goal alone, but put her effort just wide.

Following the early chance for the U.S., the match settled down considerably and for the next 15 minutes of play both sides sloppily killed off their own attacks with simple technical mistakes.

At the quarter-hour mark, the U.S. finally found its rhythm and began to pressure South Africa with a series of strong attacks. In the 20th minute Press sparked the U.S. to life, finding Morgan behind the South African defense. Roxanne Barker managed to block Morgan’s initial shot, but a streaking Pugh found the rebound with the net empty. Unfortunately for the U.S., Banyana Banyana defender Janine Van Wyk recovered in time to block Pugh’s shot and keep the 0-0 scoreline.

Pugh missed another chance to put the Americans ahead in the 30th minute, firing an open shot from the top of the 18 high and wide, but five minutes later, the U.S. finally broke the deadlock.

Bringing the ball out of the back, Klingenberg cut inside before finding Pugh in a 1 v. 1 situation on the flank. The young winger won the endline with a burst of pace and fired a pass across the face of the goal. Dunn, waiting on the back post, finished the chance and gave the Americans the advantage.

This ? Pugh/Dunn combo in the 35th min gave the #USWNT a 1-0 lead in Chicago. Watch the second half up next on @FS1!https://t.co/vOtaNQjyCo


Over the next 10 minutes the Americans continued to push forward, but efforts from Kelley O’Hara and another from Morgan failed to find the target. Then, just before the halftime whistle, Crystal Dunn combined skill and strength to power to the endline. Her cross found Morgan streaking in the six, but Barker again denied Morgan and the two sides went into the locker room with the score remaining 1-0.

In the second stanza the U.S. got off to another quick start. Three minutes after the restart O’Hara beat a defender out wide and lofted a perfect pass into Allie Long, who found herself all alone in front of net. Long headed the ball on target, but South African defender Nothando Vilakazi cleared the ball off the line and robbed Long of the tally.

Similar to the first half, the early chance in the second half seemed to kill off the U.S.’ sense of urgency and the match’s pace slowed considerably over the next 15 minutes.

In the 65th minute, the Americans nearly doubled their lead on a series of corner kicks, but multiple loose ball opportunities in the box went unfinished and the South Africans doggedly remained in the contest until the final whistle.