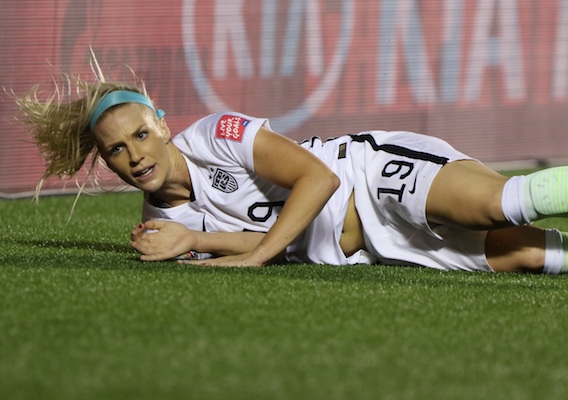 Thanks to a relentless, high-pressure defense, the U.S. stymied the Chinese Friday night in Ottawa. But the Yanks continued to struggle offensively, squandering multiple chances and scoring just once.
BY John D. Halloran Posted
June 27, 2015
8:50 AM

THE UNITED STATES WOMEN'S NATIONAL TEAM advanced to its seventh straight World Cup semifinal on Friday night with a 1-0 win over China in Ottawa.

The victory came courtesy of another stellar effort by the American backline and a goal scored early in the second half by Carli Lloyd—who also earned her 200th cap in the match.

The U.S. will now move on to play Germany—which defeated France earlier Friday in penalties—on June 30 in Montreal. Here are three thoughts from the win.

Head coach Jill Ellis made a number of surprising changes to the starting lineup on Friday—some of which worked out and some of which didn’t.

Kelley O’Hara replaced the suspended Megan Rapinoe on the wing (starting over Christen Press, who most thought would get the nod), while Ellis also saw fit to bench Abby Wambach and give Amy Rodriguez a surprise start up top. O’Hara, coming into the match as one of only three field players not to see the field in the 2015 tournament, played extremely well when given her chance to shine.

O’Hara was active up and down the flank throughout the first half and formed an instant partnership with right back Ali Krieger (Krieger was probably the team’s best player on the night). O’Hara was also a part of the vast majority of the U.S.’s best attacking combinations and showed a solid commitment to her defensive responsibilities as well. She was eventually withdrawn in the 61st minute of play—shortly after being bloodied in a midair collision—but it must be said that she gave a good account of herself and certainly should be in the discussion for more minutes as the tournament moves forward.

NO ONE MAKES KELLEY O'HARA BLEED HER OWN BLOOD pic.twitter.com/mXFYo9mFpp

Rodriguez was not as impressive. Although her work rate and hold-up play were solid, she wasted her best chances to score—including an absolute shocking miss on a breakaway in the 2nd minute of play. She also lost possession far too often in the attacking third. Rodriguez has long been tipped by many American fans to be the solution to the team’s misfiring offense (and some of her rust is understandable), but Friday night proved she isn’t the magic elixir the U.S. attack is missing.

Finally, Brian played extremely well in place of Holiday. While everyone expected Brian to be Holiday’s replacement, Brian once again proved her quality. Her simple possession out of the back was fantastic and her movement off the ball is a thing of beauty. Brian’s hard tackling and defensive work rate was also impressive.

In fact, her overall performance was strong enough to once again wonder why Ellis never gave the Holiday/Lloyd/Brian midfield combination a serious look when the team was trying to implement a 4-3-3.

The U.S. defense is still carrying the bulk of the load for the Americans and with the offense still in second gear, that’s what’s needed.

The backline combination of Meghan Klingenberg, Becky Sauerbrunn, Julie Johnston, and Ali Krieger has now started 11 games together and only allowed two goals in that period (0.18 goals against average). In this World Cup, with Hope Solo behind them, they have only allowed one goal in five games and have gone the last 423 minutes without allowing an opponent to score.

With the win against China, Solo also became the U.S.' all-time winningest goalkeeper, picking up her 134th victory against China and bypassing Brianna Scurry for sole possession of the record.

However, the American midfield and forwards are still struggling to hit the mark. Lloyd, her game-winning goal aside, had a shocker, losing possession over and over again and collecting a series of unnecessary fouls (seemingly out of pure frustration).

Alex Morgan was invisible for long portions of Friday’s match and Tobin Heath, while active, frequently took too many touches, subsequently killing off all of her passing angles and leaving her teammates in offside positions. For what it’s worth, Heath’s ability to go 1 v. 1 and win the endline still makes her one of the U.S.’s best options on the wing.

Overall, all of the U.S. players were also poor in the service they provided from the flanks, whether that was the outside midfielders, the outside backs, or the forwards when pulled wide. Service after service into the Chinese box was overhit, leaving the Americans with few good chances created from the massive advantage in possession they held.

Ellis continues to make confounding decisions, like subbing off O’Hara—who was having a terrific game; and subbing in Abby Wambach when the U.S. was leading 1-0 late in the match and needed players who could run fast and apply defensive pressure.

The U.S. will now look forward to playing in the semifinals against the No. 1-ranked Germans. The U.S., which had held the No. 1 ranking for six years between 2008 and 2014, dropped to No. 2 this past December while competing in the International Tournament of Brasilia.

However, the Americans can take some solace from the fact that Germany was actually not the better team in its quarterfinal win over France. The French outplayed the Germans for long stretches on Friday and created the best chances of the game—only to squander them. The French were also leading the match in the 82nd minute when a debatable penalty was called and converted, allowing the Germans back into the match.

However, once it went to penalties—after another couple wasted chances by the French in extra-time—the Germans applied their trademark (and ruthless) efficiency in penalties to find the win.