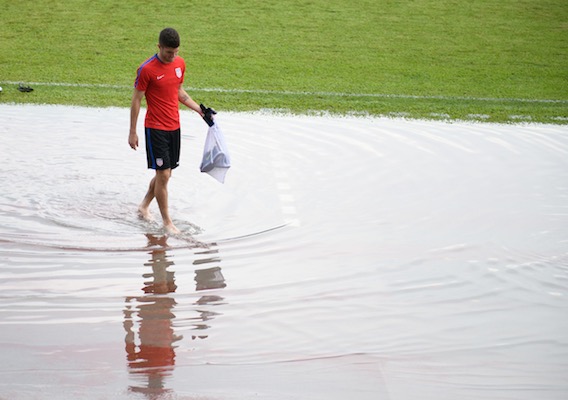 The United States men's national team is preparing to take on Trinidad and Tobago with a positive result meaning they'll go to the World Cup. If only they could get onto the field.
BY Noah Davis Posted
October 10, 2017
5:35 AM
PORT OF SPAIN, Trinidad and Tobago—We've been talking a lot about the weather and the water.

On Monday afternoon, the United States national team emerged at Ato Boldon Stadium to find the track surrounding the pitch looking more like a moat. As a result, Bruce Arena's squad was virtually unable to train the day before its make-or-break World Cup qualification match. A win or a draw sees the Americans through to Russia and a locker room champagne shower. A loss likely douses all those hopes and dreams.

The players made their way out to the grass, some walking and some hitching a ride.

First 2 #USMNT players on the field are Graham Zusi (walked across the moat barefoot) and Christian Pulisic (carried over by a staffer) ???? pic.twitter.com/amDHkMrzkQ

(Later, as the image above shows, the teenager would walk through—not on top of—the water. Very disapointing.)

In a press conference following the attempted training sesssion, the American coach lamented the conditions.

"I would love to see one of these hotshot teams from Europe come here and play in our CONCACAF qualifying and really get a taste of this and see what that's about," he said. "This is very challenging, it's like survival of the fittest. They could do one of those TV shows on this. Who will survive in the end, that's basically what this is."

This statement drew the predictable series of comments from around the American soccer community. What absurdity, for Arena to suggest that the "hotshot" European teams would struggle in CONCACAF. How could he be so bold, so stupid, so unaware?

Except that wasn't his point. Noting that training in a swimming pool isn't ideal is not the same thing as saying Germany wouldn't qualify from the Hexagonal. Frankly, I'd love to see the Germans come to Trinidad and Tobago because it's a lovely country and it would be fun to watch them deal with the rigmarole of playing here. This doesn't mean they wouldn't win. It just means CONCACAF is different, and they might be upset when they needed jetskis to get to training and then watched their best player get kicked and kicked and kicked, too.

But enough talk. Ninety minutes to the World Cup. Let's play this game.

For Arena, it's all hands on deck, with the kid leading the way. Right? "Hopefully he's fine," the coach responded when asked how Pulisic recovered from Friday night's thrashing at the feet of Panama. Trinidad and Tobago, a squad that's a flicker of the one that was the smallest nation to qualify for the World Cup before Iceland did so yesterday, shouldn't present too stiff a test. But this American squad has managed to make a mess of not supossedly stiff tests during this entire cycle, which is how they got into this must-result mess in the first place. Be prepared for a nervous evening.