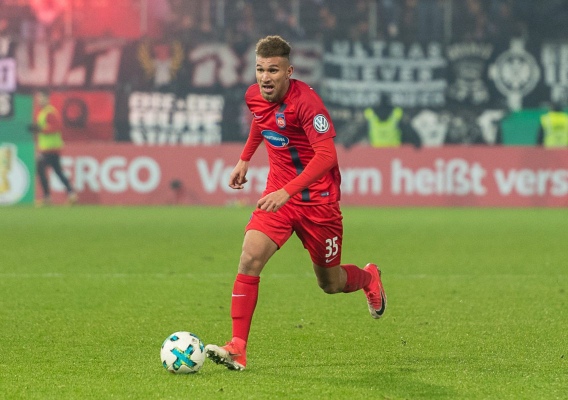 Flying under the radar with most American fans, winger Kevin Lankford is quietly becoming an important contributor for FC Heidenheim in the 2.Bundesliga and he hopes that his success can put him into the mix for the U.S. U-23 Olympic team.
BY Brian Sciaretta Posted
September 13, 2018
3:50 AM
THERE ARE A lot of young American players trying to make their way in Germany right now. Christian Pulisic and Weston McKennie have had enormously strong starts to their careers and there are others like Josh Sargent who are also trying to break through.

Kevin Lankford, 19, is not a familiar name inside of American soccer circles but the German-born winger is trying to change that after appearing in all four of FC Heidenheim games to start the 2.Bundesliga season.

When Christian Pulisic turns 20 later this month, Lankford will be the only American teenager playing first team minutes in Germany at the moment.

But despite his youth, his introduction into the first team at Heidenheim has been gradual. He made his first team debut in the second half of the 2016/2017 season and played regularly after the winter break – mostly as a sub. Then in the 2017/2018 season, he played in 14 2.Bundesliga games that season. This far in 2018/2019 he is on pace to play significantly more minutes.

When asked if this will be his breakout year, Lankford is both reluctant but full of optimism.

“Why not?” Lankford said with a laugh. “Me, as a person, I want to get better every training, every day, every week, every month. When I play, and I start, I love it. Everybody wants to play. I hope it is a breakout year for me. I don't have to rush. I am still 19 years old but I want to grow as fast as possible. In a few years I want to go with Heidenheim to the first league because I want to play first league too. This year could be my year, I don't know, but I hope it is my year… As a player, I feel good. I have played every game.”

While Lankford still has a ways to go to be the player he wants to be, he has shown glimpses of impressive talent this year in 2018. In April, he pulled off a highlight reel assist in a 3-1 win over a Fortuna Dusseldorf side that was eventually promoted to the Bundesliga.

Last month, he scored his first professional goal in a 5-2 win over Jeddeloh in the German Cup.

Over the past decade, German-born/raised Americans have featured regularly for the United States and its youth teams and Lankford himself played for the U.S. U-19 team under Brad Friedel at the 2016 COTIF Tournament in Spain. It was there he played alongside Weston McKennie and scored one goal in three appearances.

Like most of the other German-born American players, Lankford’s U.S. citizenship derives from an American father who served in the U.S. Army and was stationed in Germany where he met Lankford’s mother.

But as Lankford developed into a professional soccer player, he did not wait around for U.S. Soccer to discover him. Instead, he took a more proactive approach to get noticed.

“I wasn't so surprised to get called up,” Lankford recalled. “I had a manager in Germany and I asked him if he could do something to get U.S. Soccer to see me too because I wanted to play for the United States. A few months later, they called me up. I was very happy.”

To this day, Lankford is close with the American side of his family which is very large. His father has nine siblings and is from just outside Newport News, Virginia. Lankford is fluent in English and learned the language from his father and his family, his regular trips to the United States growing up, and also from his German mother who was also fluent and spoke English to him frequently when he was a child.

He has a lot of childhood memories from his visits to the United States. He would often travel to New Jersey to see his aunt who would take him to New York City. One time, about nine years ago, there were no Oreos or Reese’s Pieces in Germany and he brought back to Germany as much as could carry. (adding: “I loved the American food and nearly everything about it.”)

But while he is planning to return to visit next year to see his family, Lankford hopes that his football brings him back stateside even more frequently.

It was already two years ago when he played for U.S. U-19 team but he is hoping that his increasing minutes in the 2.Bundesliga will open more doors in the future – perhaps with the U-23 team which will likely begin its Olympic qualifying preparations next year.

“It was a great experience,” Lankford said. “I loved to play with them. When the national anthem played, I got goosebumps. It was very, very good. I hope to play more for the United States.”