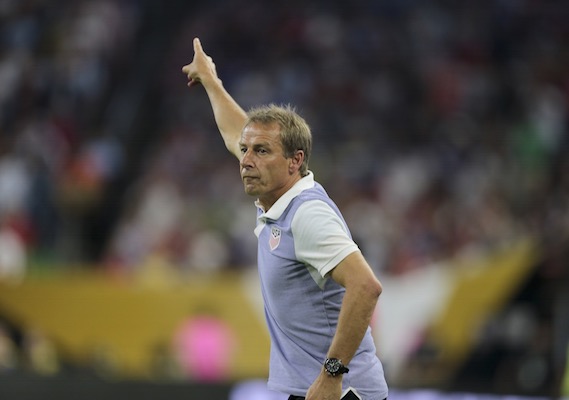 THE UNITED STATES men's national team confronted an extremely difficult task Tuesday night, going up against Argentina in its Copa America semifinal. Instead of coming out of the gate eagerly fighting, the team almost immediately rolled over in a one-sided defeat.

Losing Bobby Wood, Jermaine Jones, and Alejandro Bedoya to suspensions hurt but there was no real game plan from the U.S. Instead, Klinsmann reverted back to experiments that either have failed, using Chris Wondolowski, or are well past their shelf life, starting Kyle Beckerman.

Brad Guzan: It was a nightmare start for Guzan who was partially responsible on Argentina’s opening goal just three minutes in. He looked like he was going to make a move for Lionel's Messi’s chip and it was within his reach ahead of Argentine attacker Ezequiel Lavezzi. Instead, Guzan was caught in no man’s land. He made nice save on Messi in the 15th and 83rd minutes but couldn’t do anything else on the remaining goals. Rating: 5

Fabian Johnson: Returning to his left back position, Johnson was busy the whole game. Unfortunately he was on his heels and reduced to clearances and long balls. Defensively he was solid but due to the failure of the midfield, he was wasted in providing anything more. Rating: 5.5

John Brooks: The Hertha Berline central defender has been the best American player at Copa America Centenario but this task against Argentina was just too much. He made some nice clearances but lost his man on the third goal. Ratings: 5.5

Geoff Cameron: The Massachusetts native was probably the best American player on the field. He made a big stop in the 23rd minute on Lavezzi and then minutes later did well to hold an offside line on a dangerous play. He managed to make some important clearances to keep the score reasonable for at least a little bit. He then moved into the midfield later in the game after Argentina was in control. Rating: 6

DeAndre Yedlin: The Sunderland right back had a poor first half but used his speed on occasion to make some nice defensive plays in the second. He was only able to get forward very limited times. Rating: 5

Kyle Beckerman: The Real Salt Lake mainstay was slow to react on Lavezzi’s run on the opening goal and lacked the speed to keep up with Argentina or move into dangerous spaces to give the U.S. midfield any sort of chance. Rating: 4

Michael Bradley: It was a brutal outing for Bradley, who turned the ball over in dangerous places too many times. His passing rarely opened up anything and the midfield became Argentina’s property. Rating: 3.5

Graham Zusi: The Sporting Kansas City midfielder struggled along with everyone else, offering close to nothing in possession or in creativity. Defensively he did not win many balls or make things hard on Argentina. Rating: 3.5

Gyasi Zardes: Of the U.S. attackers, Zardes looked the most dangerous—which is saying very, very little. He made a good feed to Yedlin in the 35th minute to to help generate a half-chance. He also worked well with Christian Pulisic in the second half. Rating: 5

Clint Dempsey: The Seattle Sounders forward was never really going to be involved with the talent gap in the midfield. Dempsey did what he normally does in these situations and dropped deep into the midfield but there was nothing there for him. As a result he was invisible which, on this night, wasn’t so bad. Rating: 4.5

Chris Wondolowski: As a forward, he was starved for service. When he retreated to the midfield, he made matters worse. His horrible giveaway in the 31st minute followed by his subsequent foul on the world’s best player gifted Argentina’s chance for its second goal.  Rating: 3

Christian Pulisic: The teenager came on for Wondolowski at halftime and looked pretty good. He had a chance in the 77th minute but elected to pass when he should have taken a shot. Rating: 5.5

Steve Birnbaum: Replaced Beckerman to move Cameron into the midfield and wasn’t sharp. He made a big mistake on the final goal. Rating: 4

Darlington Nagbe: Nagbe replaced Dempsey in the 78 but by then the game was well over. Rating: NR

Jurgen Klinsmann: The U.S. men's national team likely would have lost to Argentina no matter what but Klinsmann was way too conservative in his lineup selection. He wants players to be bold and take risks but how about himself? Going up against the best team in the world, Klinsmann quickly went for his security blanket—which he and the team should have outgrown years ago.  Rating: 3.5

Leave your comments below and create your own player ratings here.