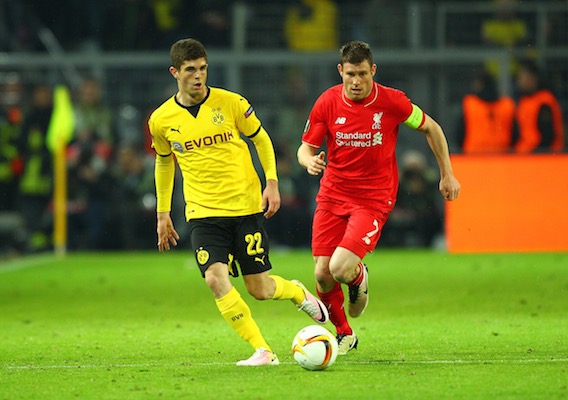 While the top flights in England, Spain, and Italy are not bending over backward to encourage foreign players, Germany's Bundesliga retains an open-door policy, and American prospects have responded.
BY Wendy Thomas Posted
July 23, 2016
2:45 PM

ONLY THREE of the players on Jurgen Klinsmann’s 23-man roster for the Copa America Centenario plied their trade in the English Premier League: Geoff Cameron (Stoke City), Brad Guzan (Aston Villa) and Deandre Yedlin (Tottenham Hotspur). With Aston Villa’s relegation from the EPL at the end of last season, that number is reduced to two; this season, the United States will not have a goalkeeper in the top flight of English soccer for the first time since 1992, when Kasey Keller joined Millwall F.C.

Even taking into account Emerson Hyndman’s recent transfer to Bournemouth, there are currently fewer Americans in the EPL than at any time in almost two decades. Why has the number of Americans playing in the EPL dropped so precipitously? If this decline is attributable to factors other than the quality of the player pool, then what is the destination of choice for Americans who want to venture abroad?

By the time of the 2014 World Cup, however, that number had dropped to four: Jozy Altidore (Sunderland), Geoff Cameron (Stoke), Brad Guzan (Aston Villa) and Howard (Everton). Two years have elapsed since the 2014 World Cup, and the Copa America roster featured just three EPL players.

A number of factors contribute to the departure of U.S. players from the ranks of English soccer. The first is the rise of wages in MLS. Howard surely could have found a place to land in the English Championship, but why would he choose to do so when the Colorado Rapids will fork out at least $2.5 million a year for the former Evertonian?

The second is the increasingly stringent rules for the acquisition of foreign players in England. In the EPL, teams must include at least eight homegrown players in a 25-man squad. A homegrown player is defined as one who, regardless of his nationality or age, has been registered with any club affiliated to the FA for a period of three seasons or 36 months prior to his 21st birthday. This means that one-third of the players on every EPL team must be English or must have joined their respective team before the age of 18. FIFA rules prohibit the transfer of players under the age of 18 unless (1) the player’s parents move to the country in which the new club is located for reasons unrelated to soccer, or (2) the player lives no further than 50km from the national border of the country and the club with which the player wishes to register is also within 50km of that border. Consequently, most Americans under the age of 18 cannot qualify as a homegrown player in an EPL academy.

Under Article 45 of the Treaty on the Functioning of the European Union, workers are entitled to free movement within the EU, which means that all players with EU nationality, including those able to obtain an EU passport through a parent or grandparent, are eligible to play in the EPL. European minors may also transfer within the territory of the European Union.

Players from certain African, Caribbean, and Pacific Islands can also sign as non-foreign players in most European leagues through the Cotonou Agreement, which is a treaty signed between EU countries and the African, Caribbean, and Pacific Group of States (ACP) whereby nationals of ACP countries who are legally employed in the EU cannot be discriminated against on the basis of nationality.

Post-Brexit, it remains to be seen whether European players will continue to enjoy the freedom of movement that has facilitated the influx of European players to the EPL and whether the EPL will continue to honor the Cotonou Agreement. However, as of the writing of this article, UK Prime Minister Theresa May has announced that the UK will not trigger Article 50 of the Lisbon Treaty until next year, which will formally kick off a two-year process of the UK leaving the EU.

For those without a passport from an EU or ACP country, recent amendments to the rules make it prohibitively difficult for foreign players to join the EPL. Previously, in order to qualify to play in the UK soccer players had to have played in at least 75% of their country’s senior international matches over the previous two years and must play for a country ranked 70th or higher. Today, eligibility is predicated on a sliding-scale relationship between the FIFA ranking of a foreign player’s country and the percentage of international matches that player has played in during the previous two years. Only players from a top-50 ranked country are eligible and among the top-ranked 50 countries, only 20 are outside UEFA (30 of the top 50 ranked countries are in UEFA; nine are in CONMEBOL; six are in CAF; three are in CONCACAF; and two are in the AFC.)

Between July 24, 2014, and July 24, 2016, Klinsmann’s squad played approximately 37 games, which means an MLS player must have played in 23 of those games to be eligible to join the EPL under the FA’s rules. Of the national team players under the age of 30 (and thus in the likeliest position to elicit interest from clubs overseas), only a few MLS players would qualify: In fact, other than Michael Bradley from Toronto FC, there is only one American who could qualify under the FA’s rules to move to the EPL: Gyasi Zardes from the Los Angeles Galaxy. It is the tightening of these rules that has stymied the efforts of players like Juan Agudelo, who sought to move to England but could not acquire a work permit.

Clubs can appeal to the FA if those criteria are not met but the FA has recently moved to curtail the granting of such appeals and thus further tightened the reins on players’ opportunity to move to England. Most appeals are now denied.

Another reason why so few Americans are joining the EPL is the influx of money the EPL has enjoyed due to skyrocketing television revenue. The money that EPL teams now receive dwarfs that of every other league, which means that EPL teams can afford to buy the very best talent that the world has to offer. EPL teams have no incentive to find value abroad when they are awash with the type of cash that enables a club like Stoke City to bring in Xherdan Shaqiri for $17.4 million.

However, what are the odds that a young American player will find regular minutes on a team if he joins the EPL? If a player joins a club like Chelsea, for instance, the odds of breaking into the Starting XI are infinitesimally small, particularly when one considers that Chelsea currently has more than 60 players signed to its first team and has never been shy about signing big-money transfers. Matt Miazga will no doubt toil in the ignominious shadows of Chelsea’s locker room for the next two seasons because, when moving abroad, he did not set his sights at a club where he could realistically be a first-team player.

Similarly, how many players in the youth ranks of English soccer will successfully transition from the academy to the first team? Players like Marc Pelosi and Sebastian Lletget spent years in EPL academies only to wend their way back to the United States after being stymied by fate (i.e., injuries, coaching changes) at their respective clubs.

What is the recourse for young U.S. players interested in playing abroad but not of the caliber to command tens of millions of pounds in transfer fees? What league offers a high-level of play but looser restrictions and more opportunities for young foreign players?

Probably not La Liga. In Spain, of the 25 players a team registers, it can have no more than three non-European Union players in its ranks.

The culture is quite different in Germany, however.

The Bundesliga has no policy against non-EU players transferring to the ranks of German soccer. Though the Bundesliga requires teams to register eight homegrown players (at least four of which must be from the team’s academy), there is no upper limit on the number of players a German team can register each season. Teams simply recruit the players the club believes are the most talented within their price range.

Bobby Wood is a case in point of how ambitious players can find an avenue for advancement within the ranks of European soccer. In the past five years, Wood has climbed from the fourth tier of German soccer at 1860 Munich II to the Bundesliga, having recently signed for Hamburger SV after a season at Union Berlin in the 2.Bundesliga that saw him score 17 goals in 31 matches. If a player is hungry enough, good enough, and willing to start in a lower division and work his way up, there is opportunity in Germany for the taking.

It is true that Klinsmann played a key role in nurturing Wood’s career. And so long as the Teutonic One is helming the U.S. national team, young American players should exploit Klinsmann’s knowledge of and connections with German clubs to the hilt.

It is true that Klinsmann’s dual-national recruiting efforts have expanded the base of players in Germany now playing for the United States—the progeny of servicemen stationed at U.S. military bases in Germany have brought forth more than a few U.S. national teamers.

It's also true that England’s loss could well be Germany’s gain.

Every major club in Europe aspires to expand its fan base, increase its revenue, and improve its global brand. The two largest markets for growth are in North America and Asia. Ironically, these are two of the markets whose players face some of the biggest hurdles in moving to Europe. Attuned to financial realities, many clubs have established bases in North America with an eye toward expanding their American audience by, among other things, developing young American talent. In 2014, Alexi Lalas characterized foreign clubs’ ambitions in the United States to The Guardian as follows: “Make no mistake. This is a gold rush. This is a land grab.”

By imposing stringent barriers to league entry, England, Spain, and Italy hope to improve the fates of their respective national teams. They are also cutting themselves off from one of the least-expensive and most straightforward paths clubs in their leagues have for growing support among American fans—including a U.S. national team player in their Starting XI.

Michael Schade, CEO of Bayer Leverkusen, echoed this sentiment when he told The Guardian in 2015, “If a player from the United States would come here and score every week...it would be a dream come true.” Without having access to clubs’ books, it’s hard to monetize the value a bona fide American star would have for a foreign club, but consider this: When El Tri’s Javier “Chicharito” Hernandez transferred to Bayer Leverkusen, the announcement of the sale of his jersey crashed the team’s website. Provided the player is a genuine talent, German clubs looking to make gains on the EPL and find traction in the lucrative North American market will benefit financially from opening their gates to foreign talent, be it American, Mexican, Chinese, Japanese, etc.

And for those enterprising youths who thirst to find soccer glory on foreign shores? Hey, consider brushing up on your German.