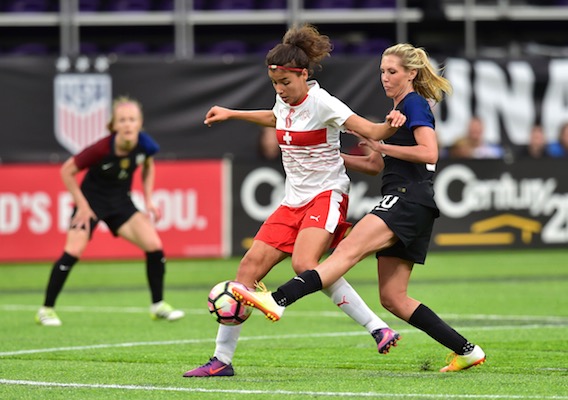 Allie Long Embraces Move From Midfield to Back Line

The 29-year-old New York native was named to the NWSL's Best XI—as a midfielder. So what did U.S. national team coach decide to do? Move Long to central defense. And it worked.
BY John D. Halloran Posted
October 25, 2016
2:05 PM

FOR THE UNITED STATES women’s national team, the oddities of the women’s international calendar produce two diametrically opposed extremes. With the World Cup and Olympic tournaments in back-to-back years, the Americans go through one year of near-constant preparation and competition, followed by a three-year lull until the cycle repeats itself all over again.

However, U.S. head coach Jill Ellis is looking at the bright side of this interval and using it to test out new personnel, new tactics, and new positional responsibilities.

Speaking to the media this weekend ahead of the U.S.’ match against Switzerland, Ellis offered this: “What I’m trying to give myself is six months to go through a process of looking at these pieces and then determining after that period, ‘What are the best spots for these people? What is the best system?”

Among the changes made this camp, Ellis brought in 11 new players while leaving 10 Olympic veterans at home. She also deployed a new 3-5-2 formation and, in perhaps her boldest experiment, moved midfielder Allie Long into the backline as the team’s newest central defender.

While Long says she knew this camp would be different, she admitted being taken aback when Ellis announced the change.

“When she told me, I was like, ‘OK?’ I just got off of a season where the only midfielders [this year] that made [the NWSL] Best XI were me and Tobin [Heath] out of the whole league,” said Long. “I just came off of a great midfield season, so for her be like, ‘You’re center back.’ I was just like, ‘OK, I’ll try it.”

After some time to process the decision, Long became excited at the prospect of a new challenge.

“The type of person I am, everything I’m about is growing, being uncomfortable, and being challenged,” she explained. “When she told me, it was a perfect opportunity to grow as a player, and be versatile, and learn as much as I can.”

Ellis pointed out that the idea to move Long to center back occurred during the U.S.’ September training camp and came from a desire to improve the Americans’ distribution out of the back.

“For a coach, if you had a dream center back, you would want to take an athletic center-mid and make them [a back] because now, in today’s game, the center back is often times the quarterback,” noted Ellis. “They get a lot of the ball, they’re on the ball a lot. Instead of just playing [laterally], you want a center back to play [vertically].”

“The ability for a center back to break lines, it gives you a whole other dimension rather than just this lateral movement,” she later added. “That’s where you see a center-mid’s skill set and say, ‘They’ve got the vision, they’ve got the quality, the [passing ability].’ That’s where I was leaning, to see if we put a quarterback back there, what else do we get?”

Undoubtedly, Ellis’ 3-5-2 experiment proved to be an instant success, with the U.S. outscoring the 15th-ranked Swiss 9-1 over two matches. Still, over the two October friendlies the U.S. did concede once, on a break down the left side. On the play, Lara Dickenmann split Long and Becky Sauerbrunn—who was playing as the team’s right center back—and got in behind.

While Ashlyn Harris parried Dickenmann’s shot away, Kelley O’Hara allowed a streaking Sandrine Mauron to slip goalside and finish the rebound before Harris could fully recover.

Nevertheless, Ellis had nothing but compliments for Long’s efforts during this camp, and praised her communication, organizational skills, defensive reads, and passing out of the back.

Sauerbrunn, widely regarded as one of the best center backs in the world, also praised the new system and her new backline partner.

“Initially, I was a little intimidated because playing in a three-back is very difficult as a defender, but we were generating so much pressure in the midfield and [up] top that it actually made our jobs almost a little easier for us,” said Sauerbrunn. “It was a little easier to read where the balls were going.”

“I think [Allie] did phenomenal in there,” Sauerbrunn later added. “She was finding some great through-balls. She already has great distribution from playing center midfield. She’s got the long [passing], she’s got the short-range as well. I was very impresssed with her and I would not be surprised if that is something that maybe is looked at in the future.”