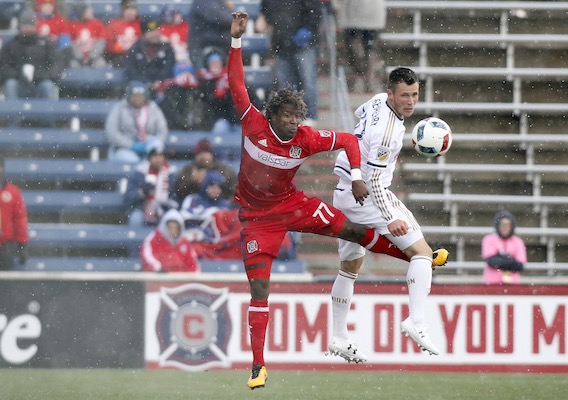 A surprise selection with the No. 3 pick in this year's MLS draft, Philadelphia's Keegan Rosenberry has played every minute this season and will represent the Union in the MLS All-Star game.
BY Brian Sciaretta Posted
July 11, 2016
9:30 PM

SINCE ITS INAUGURAL SEASON in 2010, the Philadelphia Union has qualified for Major League Soccer's postseason exactly once—in 2011. In a league where the majority of teams make the playoffs, that's just not good enough, which prompted the team to hire Earnie Stewart to be its Sporting Director last October.

Stewart faced a key test immediately: The Union held the second, third, and sixth overall picks in the 2016 draft. Pundits expected the former AZ Alkmaar sporting director to take Georgetown’s Josh Yaro with the second pick but his selection of right back Keegan Rosenberry with the third pick, also from Georgetown, raised a few eyebrows.

The conventional wisdom was that the Union would take Stanford University’s Brandon Vincent in that spot, since Vincent played the coveted left back position, was the captain of the NCAA champion, and had just earned a call-up to the full U.S. national team.

“I was at the draft and when Rosenberry came up third, I think everyone was taken aback,” Georgetown head coach Brian Wiese said. “You weren't expecting it. You thought maybe the top 10 or first round, but for him to go third...good for the Philadelphia Union to know what they wanted and not listening to what the conventional [talk] was saying. It's great to see them stick to their thoughts and good for them to see it pay off so far.”

Rosenberry, 22, was a known quantity around the Union after growing up nearby Lancaster and playing for the Union’s academy during the summers. His relationship with head coach Jim Curtin dated back to his first Union practice when he was 16.

The Union had wanted to sign him to a homegrown deal but was denied by league rules. The team’s inside knowledge of Rosenberry, however, led to the Union rating him much higher than most other teams. Still, to be drafted third took Rosenberry by surprise.

Six months removed from the draft, the Union have proven to be right. Rosenberry has been a starter since opening day and has played every single minute this season. In being named an All-Star starter, Rosenberry became the first rookie to be given that honor since 2013 and only the second since 2005. He has performed so well that he should be the top contender to win the Rookie of the Year.

“For me it was just continuing to try to do the things that I did well at the college level and I felt were strong parts of my game—a simple playing style and not trying to do too much,” Rosenberry told American Soccer Now. “Then I was trying to focus on the defensive responsibilities first. Whether it was too conservative of an approach—maybe. But at the same time I think it was best for me starting my first couple of games right off the bat."

The Union are certainly happy with Rosenberry’s progress. Many had figured that the rebuilding of the team could take years and that making the playoffs would be an uphill struggle. The Union, however, have made a run into the quarterfinals of the U.S. Open Cup and are currently in second place in the Eastern Conference.

As part of a revamped backline, Rosenberry's 1v1 defending has halted dangerous attacks from some of the league's best attackers, including Giovani Dos Santos, Robbie Keane, and Didier Drogba  (as seen below and initially assembled on MLS Soccer’s website).

“What we like to see in our right and left backs are players that are low to the ground, that can turn on a dime, and that have speed,” Stewart said of Rosenberry. “He possess all those qualities. He can only get better with experience and with playing games. That's something that we wanted to create with the Union. We want to be known as a club that gives these kind of talents and these kind of rookies a chance to prove themselves. A lot of times you see that these players are better than people think.

“He's a very mature player for a rookie,” Stewart continued. “He also knows what he's maybe not so good at and what he needs to work on. He has a great work ethic and is a level-headed guy. Those things are very attractive in acquiring such a player. After scouting at Georgetown and seeing him at the combine and actually speaking to him, we had a need in that position and we thought he would be a fantastic fit for us in the way we wanted to play."

In June, Rosenberry enjoyed another exciting moment. On the day after the United States national team defeated Paraguay at the Copa America in Philadelphia, the U.S. team held a training session for players who did not feature in that game. Needing numbers, Rosenberry was asked to participate and played alongside the likes of Steve Birnbaum and Matt Besler.

To date, he has not had any significant experience internationally. His only taste came last year when he was called-up to a U-23 camp that had a purpose of identifying college players. In the end he was left off the U.S. U-23 team.

Like the topic of the Rookie of the Year, Rosenberry admits the idea of international play has crossed his mind

“It's something that has always been at the back of my mind but until that's achieved, I try not to think much about it," he said. As for the Rookie of the Year award, "it's impossible to completely not think about but it gives you confidence to hear your name tossed about.”

Last year Georgetown had six players from its team turn professional. Like any other coach, Wiese is bullish on his players but Rosenberry is a true standout for the program. He noted that the 1v1 defending where Rosenberry is now excelling wasn’t always his strong suit. It was something he had to bring to his game quickly to adapt as a professional. It is that sudden growth that Wiese believes can take his former player to a very high level.

“He got a real eye-opener in his first game against FC Dallas going against some of these amazing wingers,” Wiese said. “They gave him a hard time. For someone not as mentally tough as Keegan, it would have shattered their confidence. Whereas Keegan looked at it and said, 'I've got to solve that.' Then you see him evolve to handle that. I think it's amazing how quickly he's gotten himself to be a very good 1v1 defender in a league where you've got a lot of very good wingers.

“He's just a great soccer player,” Wiese added. “He's an incredible athlete but he's as technical as a player as I've been around. His range of passes—these are passes, these aren't just lucky balls that people are running on to. He can do a lot of different things. I can see him becoming more and more dangerous in the attacking third. I think his upside is huge and he hasn't even scratched the surface yet with how good he could be. I think he's as good a candidate long-term for right back for our national team as anybody out there.”

Rosenberry is focused on the short term and trying to get the Union into the playoffs and into a position where it can make a run. He is aware that with youth and solid play, there will always be hype which has led to the downfall of many young American players. But after being on track for 3,000 minutes in his first year and having learned some hard lessons along the way, he is confident that the growth will continue.

“For any young player, having a head on your shoulders and being able to handle both praise and criticism is something that comes with experience,” Rosenberry said. “That's why you maybe see younger players struggle with that a lot. For me, it's just the same approach and not try to focus on it. Just keep doing what you're doing.”