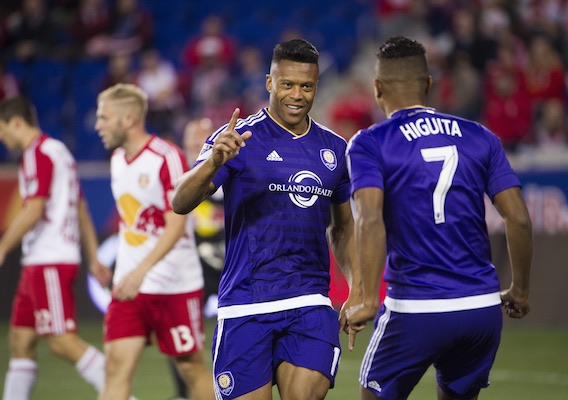 All in Good Fun: Another Wacky Weekend in MLS

Bad teams play like MLS Cup finalists. Talent-laden teams can't score goals. Coaches bench superstars and then get into arguments with the media. Say this for MLS—it wasn't boring this past weekend.
BY Brian Sciaretta Posted
April 25, 2016
9:45 PM

THIS WAS A FUN MLS WEEKEND. Yes, the officiating was predictably bad. Yes, predicting results continues to be a fool's errand. But Bruce Arena called reporters “nutty"; Patrick Viera benched a legend and thought his toothless team was good; Karl Ouimette went full Cobra-Kai on Cyle Larin; and in the middle of it all were some moments of quality soccer.

Let’s get right into it, shall we?

Colorado and Philadelphia for real?

Predicting results in Major League Soccer is very, very hard and there is no better evidence of this than looking at the strong starts of Colorado and Philadelphia. After nearly two months of play, Philadelphia leads the Eastern Conference while Colorado is in second place in the West.

So what accounts for these two unexpected turnarounds?

For Colorado, Jermaine Jones continues to be the guy who came to MLS with a point to prove. On Saturday he scored for the second straight weekend in Colorado’s convincing 3-1 win over a struggling Seattle Sounders team.

Jones has been great and it is similar to how he played for New England. He’s not treating this as a vacation. Even before his suspension cleared, the rest of the team was playing hard. It is almost as if the players were angry about the negative attention surrounding the club during the offseason. It’s tough to see it lasting but the team is exceeding expectations at this point.

Philadelphia, on the other hand, had a very good draft to reshape the defense with Josh Yaro and Keegan Rosenberry. On top of that, C.J. Sapong has been a terror up top. Sapong has always had the talent so his success is not entirely unexpected, and the same foes for Chris Pontius, a proven MLS contributor.

All this was apparent in Philadelphia’s 2-0 win over New York City FC. Sapong’s strengths are a great fit for MLS and Tranquillo Barnetta has been able to make big plays. His assist on Sapong's opening goal was skillful and a delight to watch. His freekick goal last weekend was a masterpiece.

The Red Bulls: No Defense

The New York Red Bulls won Sunday night, 3-2, but the victory over Orlando City revealed more problems than solutions despite the three points. The Red Bulls were by far the better team and should have blown Orlando City off the field.

Instead the game was close because of the gaping hole in central defense. If Orlando had Kaka available yesterday, it probably would have won. Ronald Zubar is not fast enough for this league and Karl Ouimette has been a liability and should have been tossed after going full-Cobra Kai on Cyle Larin in the second half.

63' Bendik launches a drop kick to Cyle Larin who is alone up top. He is taken down in the box, but no call. pic.twitter.com/YOfHIOUqeT

New York is better than its six points through six games, but it will not be a contender without better central defense. It should have been more prepared entering into this season since it was known Damien Perrinelle would be injured and Matt Miazga was not coming back. But moving forward, it has to hope Perrinelle can make a strong return later in the season and that the injured Gideon Baah will be effective when get returns to the fold

Earlier in the season I predicted FC Dallas would win both the Supporters Shield and MLS Cup. So far I am standing by my decision although Oscar Pareja’s team is prone to playing very well for a few weeks and then unleashing an absolute stinker of a performance. Earlier this season, it inexplicably lost 5-0 to Houston and then on Saturday night it fell to Vancouver 3-0. Vancouver is a good team and was playing at home, but Dallas can and should do better.

“We’re disappointed,” Pareja said afterward. “It was one of those nights when we created chances and I thought the team looked good but we were not fine in the last third. We didn’t finalize it in the first half. One [chance] that Vancouver had and one of our mistakes and they took it…That’s the game, we have to accept it and it has happened to us before when we don’t create as many options and are sharp and effective and tonight Vancouver was very effective and I have to recognize that.”

Are these lapses due to FC Dallas' youth? If so, there is a strong likelihood that the team corrects itself toward the end of the season. It's refreshing to see a coach so eager to feature young players but doing so is not without risk.

“This group has been recognized as a team that has a lot of character and I have no doubt about that,” Pareja added. “We have a group of players that can bounce back. We have proved that. What we’re looking for in the next games is just to get points. It’s not an easy journey in this league.”

I still like this team’s direction and the potential is there for a well-oiled squad come October, November, and even December.

Boateng has Galaxy trending up

The real star however was Ghanian attacker Ema Boateng who scored a goal and registered two assists in a brilliant showcase. The 22-year-old attacker played college soccer in the United States for UC-Santa Barbara before beginning his professional career in Sweden with Helsingborg.

Bruce Arena chided reporters for being myopic about the team's slow star.

“Not to be critical of you people, but you get too nutty at the beginning of the season about what’s going on,” Arena said to reporters afterward. “We’ll hopefully have a good team in October, November, December. Everyone gets real excited about what’s going on early in the season and rightfully so. But there’s a lot of time left to find out who can really play in this league, and that is yet to be determined….. I think in a couple of months we’re going to be a real good team.”

Arena was full of praise for his young midfielder.

“He’s faster than most players,” Arena said of Boateng. “He’s left footed, which helps on our attack on that side of the field. He’s a good overall player. He’s really grown during the preseason and the start of the season. He can play on both sides of the ball. He’s getting better. He’s understanding the qualities he brings to the field, and his teammates understand it, and that allows him to be more productive.”

NYCFC is still a mess

If bigwigs over in Manchester are still paying attention to their satellite team in New York, also known as New York City FC, they are probably puzzled. They fired Jason Kries for not making the playoffs in his expansion year and replaced him with Patrick Vieira who they surely figured would right the ship and take the league by storm thanks to his wealth of European experience.

Eventually Kreis will land on his feet and probably be successful again. As for Vieira, he has the team more confused than ever. If NYCFC doesn’t make the playoffs this year, how do they justify keeping Vieira? They probably will anyway but it will be fun watching them explain it.

On Friday, New York City lost to Philadelphia 2-0 and Vieira was the talk of the game for his postgame comments. First, Andrea Pirlo did not play in the game due to “coach’s decision.” That is a bold move from Vieira and admirable in a way because it shows he is not afraid to stand up to high-priced talent. It also shows that there is recognition that a midfielder needs to be mobile and play defense in this league.

“It was my decision,” Vieira said of dropping Pirlo against the Union. “I was really just choosing the best team to try to win football matches.”

But what was remarkable after the game is that Vieira insisted his team was the better side despite the loss.

“We created more than we concede, much, much more,” Vieira said. “That’s why there is a lot of frustration and anger because we should take something back home because of the number of chances that we create, regarding the number of chances that we concede. I think when you analyze the game, you can see that we control the game, and I think that we were by far the better team today.”

Afterward he was questioned about that statement by a reporter who correctly pointed out his team was not that dangerous at all in the second half. It was kind of an eye-opening statement that is going to have more people questioning Vieira.

Right now, the direction of this team is about as clear as its search for a new stadium.

Goal of the week? Take a bow Luciano Acosta who hit this beauty in D.C. United’s 3-0 win over New England.