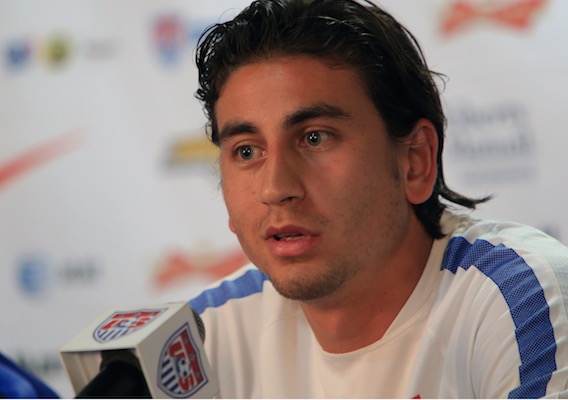 Alejandro Bedoya Told ASN: "I Am Feeling in the Zone"

The 28-year-old midfielder is on a great run of form with his club in France—which is great news for Jurgen Klinsmann as the United States prepares for a pair of World Cup qualifiers.
BY Brian Sciaretta Posted
March 21, 2016
7:00 PM

ALEJANDRO BEDOYA has experienced quite a bit since joining Nantes in 2013: relegation battles, a transfer ban, heavy player turnover, fatherhood, and a serious illness that kept him bedridden for more than a month.

Despite all of that, the 28-year-old has also managed to display the best form of his career.

“I feel that I am just starting to get into my prime, even if you think that I’m old,“ he told American Soccer Now with a chuckle. “I don't feel that. My age might say that or that I shouldn't be in my prime anymore, but if you compare myself or an average American player, we haven't been playing professionally for as long as other guys here in Europe.

“Mentally, I am feeling in the zone,” he added. “Every game, I feel like I am going to make the difference.”

Bedoya has frequently proven himself right on that count this season, too. On Jan. 20, he scored the lone goal against FC Mantes in the fourth round of the Coupe de France; three weeks later he netted the game-winner against Bordeaux in the last 16.

The New Jersey native attributes his blistering run of recent form, which also includes both of his Ligue 1 goals and two of his four league assists, to his winter break, which he spent with his girlfriend and infant son visiting her family in Norway.

“I really needed that Christmas break to get the proper break without doing any thinking about soccer—just getting that mental recuperation and recovery,” he said.

When Bedoya returned to Nantes, all of that showed.

The mental clarity and strength seem to have been the final push for Bedoya, who had for several years been a key constant at Nantes but never a star. The club, though, is certainly reaping the benefits of his hot streak, pushing into eighth place with a game in hand—just four points out of fourth place and the accompanying Europa League spot.

It’s a far cry from where the team had been in recent seasons: namely, the bottom of the table, due in part to an 16-month transfer ban because of a violation that occurred before Bedoya joined the team. With that ban since lifted, this season’s starting lineup has retained only two players from last year’s.

And despite persistent rumors of a move stateside—“With a baby, you’d like to eventually start your family back on familiar ground,” Bedoya said of his recent talks with MLS— Bedoya was one of those two.

“It’s been quite the ride,” he said. “It’s amazing. They’ve been through a lot. Now we’ve got the city on its toes.”

And Klinsmann on his.

After a disappointing 2015, when it finished fourth in the Gold Cup and then fell in the CONCACAF Cup that followed, the United States suddenly has a number of key players performing well. The challenge now will be to parlay that success at the club level into results for the national team.

“This gives us different options going toward the World Cup qualifiers at the end of March,” Klinsmann said of the in-form Americans playing abroad. “Now with Alejandro Bedoya being in top form and Fabian Johnson being in top form, that’s for us big because they are difference-makers, and you need players on the field that can make a difference.”

The transition between club and country is not always easy, Bedoya points out, mostly because the national team meets on such an irregular basis.

Just as he has at Nantes, Bedoya looks as if he will be presiding over a transitional period with the U.S. Following the CONCACAF Cup loss, Klinsmann said he would look to bring new and younger player into the mix, and he began doing just that in November with the introductions of Matt Miazga and Darlington Nagbe. January camp has since led to the recalls of players like Ethan Finlay, Lee Nguyen, and David Bingham for this month’s World Cup qualifiers against Guatemala.

A fresh start, in the end, may be needed. But as far as notions of Christian Pulisic, Gedion Zelalem, or other youngsters coming in to “save” the national team, Bedoya emphatically calls for caution.

“I am all for the new guys coming up and showing what they’ve got,” he said. “I just hope everybody can temper their expectations. You always see that in America the hype machine gets started a little bit too early for many guys. It’s kind of a shame because there is so much talent in the states, but I think it’s a tendency for many media to always be attached to the new guy on the block.

“I’m not lying to you: I wouldn’t be here at this stage if I wasn’t a bit arrogant or a bit cocky or if I wasn’t confident in my own abilities,” Bedoya continued. “You have to be like that as a professional. But I think that the media does [encourage some players] to think too much of themselves. We need to let players get their chances, and if they take them, great.

"We have the new player, Pulisic, that everyone is talking about. He looks the real deal from the little bit I’ve seen of him with Dortmund. But like I’ve said, let’s not make him out to be the next savior of the U.S. men’s national team like I’ve seen with past headlines for other players.”

Time will tell on Pulisic, of course. For now, Bedoya urges, if you’re looking for a national team hope, look to Johnson, Cameron, Wood, and yes, even himself.