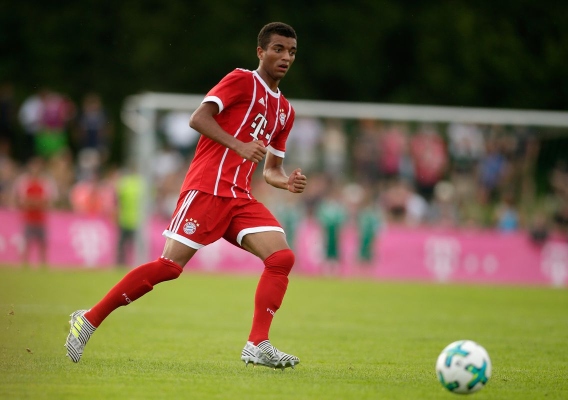 Ahead of Nurnberg opener, an international decision looms for Tillman

Timothy Tillman has been a prominent prospect in Germany for years but as the talented German-American teenager gets ready for his first Bundesliga season with Nurnberg an decision on his international future awaits.
BY Brian Sciaretta Posted
August 17, 2018
4:00 PM
SO FAR in his young career, Timothy Tillman has been an intriguing prospect while for the youth teams of two of the most storied organizations in the sport of soccer - Bayern Munich and the German national team.

But this season is one where Tillman, 19, will be looking to take the next step in his career as a footballer. After scoring six goals and adding seven assists last season for Bayern Munich’s U-23 team, Tillman and Bayern agreed that the next step for him was a high-level loan within Germany.

In early July, that came to fruition as he secured a season-long loan to FC Nurnberg which was recently promoted to the Bundesliga in May and will open its season on Saturday with a cup match against fifth-tier SV Linx followed by its first Bundesliga game against Hertha BSC on August 25. For Tillman, moving to Nurnberg was ideal because it also moved him back to his hometown.

“Everything is really good now,” Tillman told ASN from Nurnberg. “I feel comfortable in Nurnberg. I am back here in I am really happy to be here again. My goal here is to get some Bundesliga experience. It's the top division and why I chose to come here.”

“Our goal is to have a lot of good games and play nice soccer,” he added. “If we do that, we hopefully won't be down in the table.”

It is a familiar setting for the Tillman who developed his game with nearby Greuther Furth – whose stadium is located just seven miles from Nurnberg. At the age of 16 in 2015, Tillman was one of the brightest prospects in Germany. That year he was sold by Greuther Furth to Bayern Munich for €500,000 - a hefty price tag for a player his age. It was a highly publicized move and one where Greuther Furth president Helmut Hack didn’t mince words.


"Timothy Tillman is the biggest talent we have had for 30 years,” Hack said at the time. “His departure is a catastrophe for our club."

Newly promoted teams in the Bundesliga can sometimes struggle but Tillman is expected to be a catalyst for the team’s offense. Versatile across numerous positions, Tillman will be a useful to Nurnberg manager Michael Köllner.

“I like to play as a central attacking midfielder,” Tillman explained. “That is my favorite position but I am also good, and can use my best abilities, out on the wing too. That is how I think.”

But it is not just at Nurnberg where Tillman will be taking his next big steps. On the international front, Tillman might also take on new responsibilities.

But only he doesn’t know what national team he will be playing for in the future.

Tillman was born and raised in Germany to an American father and a German mother. When he was young, his parents divorced but he remained with his mother in the Nurnberg area. Still, he held dual citizenship with the United States growing up.

“I only grew up in Germany,” Tillman said. “My parents got divorced when I was three years old. My father is from Detroit but I only visited America once when I was with Bayern Munich.”

Instead, Tillman played for the German U-19 national team that month where he was a second half sub in a 4-1 win over the Netherlands in a U-19 European qualifier. Throughout his youth career, Tillman has been a regular with German national teams dating back to the U-15 level and has featured in official games for the U-17 and U-19 team.

Despite the reversal of fortune, Tillman has maintained contact with Ramos and has had positive discussions with him. If Tillman were to play for the United States internationally, it would require him to file a permanent one-time switch with FIFA due to his participation in official games for Germany.

Unfortunately for Ramos, however, the U-19 European games Tillman played for German also serve as U-20 World Cup qualifiers for UEFA and, even if Tillman should switch to the United States, that would preclude him from playing for the U.S at the U-20 World Cup. Still Ramos has maintained discussions with Tillman who is eligible for the United States U-23 Olympic team as well as the full national team.

“Yes, of course,” Tillman said when asked if the United States is still an option for him internationally. “I am talking to Tab Ramos, the U-20 head coach. When I moved to Nurnberg, he texted me and that is the last time I spoke with him. He knows I am thinking about it and the German coaches know I am thinking about it too.”

The Tillman situation is not unusual for U.S. Soccer as many players over the past decade have entered the player pool who were born in Germany to a German mother and an American father who served in the U.S. military.

Timothy acknowledges that he and his brother have talked about the decision over which country they will represent and in those discussions his brother mentions that his experience playing the United States was positive. He also points out that he does not know when he will make a decision.

But a lot will depend on this upcoming season – his first in the Bundesliga – and the impact he is able to make at that level. While nothing is currently pressing, initial success with Nurnberg could lead to a call-up to the U.S. U-23 team or perhaps even the full U.S. national team.

The decision as to whether or not to accept such a call-up might come sooner than later.

“We talk about it,” Tillman said about his discussions with his brother. “He really enjoyed it. It was his first experience with a national team. He had a lot of fun....It is tough to say because I don't know which country I will play for in the future. I have a decision to make.”