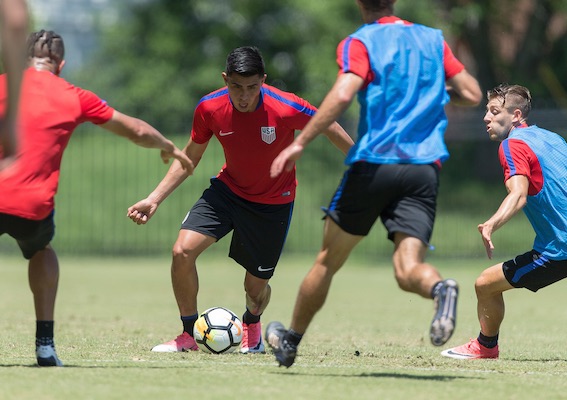 Shut out of the U.S. national team for a variety of reasons, Juan Agudelo, Joe Corona, and Eric Lichaj all realize they have a chance to make a positive impression during this summer's Gold Cup.
BY Brian Sciaretta Posted
June 28, 2017
8:30 AM

WHEN BRUCE ARENA unveiled his 23-player roster for the group stage of the Gold Cup there was a lot of excitement about some of the newcomers and rising stars of American soccer. But beyond the eye-catching inclusions of Kellyn Acosta, Cristian Roldan, Dom Dwyer, and Kenny Saief there was another group of players who see this tournament as a shot at redemption.

These players did not generate a lot of attention with their call-ups but are all still very talented. For a variety of reasons, their careers have hit stalled at some point and their national team involvement declined in the process.

Juan Agudelo, 24, is the best example. On November 17, 2010, he was called up to the national team by head coach Bob Bradley and scored the winning goal in a friendly against South Africa in Cape Town. At just 17, he set a record for the youngest player to ever score for the U.S.—a record that would stand until Christian Pulisic scored in 2016. The following summer Agudelo scored in a 1-1 draw against Argentina at Giants Stadium.

The Agudelo hype never quite translated into him being a consistent contributor for club and country. His call-ups were erratic at the start of Jurgen Klinsmann’s era. But after a failure to obtain a UK work permit prevented his transfer to Stoke City, Agudelo mysteriously disappeared for the rest of 2014. When he rejoined the New England Revolution, his performances gradually returned to an impressive level but his national team involvement was nominal.

But with seven goals in 15 appearances for New England this season, Arena seems ready to give Agudelo an extended opportunity with the national team. It’s something he has not had since the 2011 Gold Cup.

“They're some inconsistent call-ups but I wouldn't say it's frustration it's just a bit of disappointment at times in myself, not anybody else,” Agudelo said from U.S. camp. “Because I believe I belong in the call-ups but sometimes I don't show myself at the club level. That's the only thing I'm disappointed on is myself.

“It's definitely a great opportunity for all of us,” he added, referring to the Gold Cup. “It's strange to think that I've been here a couple of times. It's an opportunity you have to take. You don't know when you'll have another opportunity like this in a major tournament before a World Cup.

The story is somewhat similar for Joe Corona. He began representing the United States in the summer of 2012 and then won a Liga MX title later that year with Club Tijuana. He was seen as one of the top young American players and in 2013 he was part of the U.S. Gold Cup-winning team. But things eventually cooled off. He made the 2014 preliminary World Cup roster but was eventually cut. In 2015 and 2016 he was loaned away from Tijuana, with the second loan to a second-division club.

Things started looking up for Corona earlier this year. He returned from loan to Tijuana and earned a starting spot. Xolos finished atop the Liga MX regular season standings in the Clausura before eventually being eliminated in the playoffs. Corona will turn 27 during the Gold Cup and this tournament represents perhaps the last chance of his career to build a case for a World Cup spot. He understands the opportunity but insists he arrives in camp with momentum from his past season.

“It's been two years since I've been here,” Corona said. “I'm very happy. First of all I'm very thankful that Bruce gave me the opportunity to be here and give me a chance to show myself and a lot of my teammates to play in a great tournament. I think we all want to win this tournament. I come into a great group of players and human beings.

“I was away with Dorados for a year and there were a lot of ups and downs,” he added. “First, me going down to the second division and then we won the championship in the second division. Then I came back to Tijuana where I played most of my career. We had a great run last season and I got a lot of playing time. That helped me a lot to get my confidence back and get some goals. I think that's the reason I got the call-up.”

While Agudelo and Corona’s irregular call-ups over the years were understandable due to club form, Eric Lichaj’s lack of involvement during the Klinsmann-era was puzzling to media, fans, and sometimes players—Benny Feilhaber mentioned Lichaj's exclusion in a rant about the German coach last year.

Lichaj, 28, seemed to be getting fast tracked into the team in 2011 under Bob Bradley but outside of a few token friendlies, his call-ups were halted under Klinsmann—even when he became one of the most effective players at Nottingham Forest and U.S. team struggled to find stability at both the right and left back positions.

Arena quickly built up depth at both fullback spots but seems intent on giving Lichaj a shot. He intended to call up the Chicago native up for the World Cup qualifiers in March but an injury ended those plans. Now the Gold Cup is here and Lichaj will finally have his first extended run with the team in six years.

“It's always a good feeling to represent your country,” Lichaj said via U.S. Soccer. “When I was younger, I always watched the national team. It's something I am always proud to do—to wear the crest. I am going to do my hardest and it's an opportunity for everybody in this squad to stake their claim for a World Cup spot in a year's time. I am working toward that goal. That is my ultimate goal—trying to show myself at this camp.

"There is always competition for a spot and all the guys know that. If you're not on your 'A game,' I don't think you'll be playing many games. I am going to make sure I work as hard as I can to get into that starting lineup.”