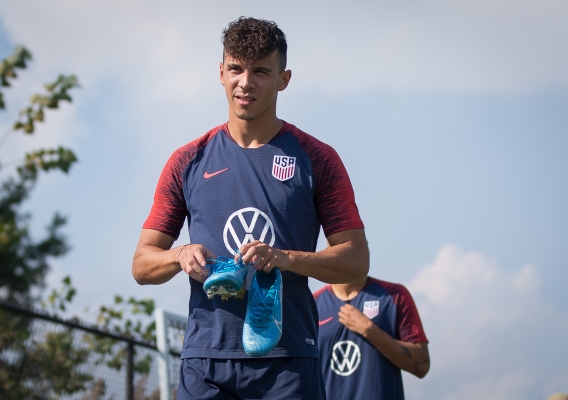 After three year absense, Morales ready to contribute to the U.S. team

Alfredo Morales has been away from the national team for a long time. But now back with the sqaud, Morales is excited by the many changes within the team and is eager to find a role in its future. ASN's Brian Sciaretta chimes in from New Jersey where the national team is in camp ahead of Friday's friendly vs. Mexico.
BY Brian Sciaretta Posted
September 05, 2019
4:00 AM
MORRISTOWN, N.J. – When Gregg Berhalter announced his roster for the September friendlies against Mexico and Uruguay, many names stood out. The inclusion of youngsters Paxton Pomykal, Sergino Dest, and Miles Robinson were drew a lot of attention but weren’t exactly surprising given their high level of play in 2019.

The most surprising call-up of this roster, and perhaps the most surprising of Berhalter’s tenure so far, was Fortuna Dusseldorf central midfielder Alfredo Morales. Despite being a regular in the Bundesliga for most of his career, Morales, 29, has been out of the national team picture for over three years.


Alfredo Morales wins a tackle in midfield and scores his first goal of the season for Düsseldorf ????????#F95B04 pic.twitter.com/bOxIpc6qs8

All of his previous call-ups had come under head coach Jurgen Klinsmann who struggled to find regular minutes for Morales during his tenure as head coach. When Morales was replaced halfway through the 2015 Gold Cup, Klinsmann said of Morales that “there are certain things that just don’t click yet, and it’ll just take a little bit of time." But Morales was never completely back in the picture again – either for Klinsmann, Bruce Arena, or Dave Sarachan.

“You're an athlete. You're a professional player. You always want to achieve something or you have goals you're aiming for,” Morlaes said on his long absence from the U.S. team. “I was a little disappointed, honestly. It would be bad if I wasn't. But not in a negative way. I was just trying to give my best every day, work hard and I'm a very confident person. I was always sure that when I do it, then the chance will come.”

Morales proved to be correct. He kept his consistent career in the Bundesliga going. When Ingolstadt was relegated, he was considered to be on of the team’s best performers and remained in the top flight when Fortuna Dusseldorf bought him on a transfer.

But even when he remained in the top flight, the calls from U.S. Soccer never came. Klinsmann moved on in the 2016 Copa America and the start of World Cup qualifying with other players. Arena tried to patch-together the team with experienced players and Sarachan was hired on an interim basis and had the goal introducing as many young players as he could.

But that exile changed over this past summer when his strong preseason and start to the 2019/20 Bundesliga campaign with Fortuna caught the eye of the new U.S. manager who played extensively in Germany during his playing career.

“It's not that I was at my house, for example, the whole day hoping somebody calls me but I was just trying to prepare myself mentally for everything,” Morales recalled. “And I just got a text from an American number: ‘this is Gregg Berhalter, do you have a minute to talk?’...He just told me that I deserve to come in and just be a part of the team. He was just trying to explain to me his idea of soccer. The idea how he wants us as a team to improve. It was a really good conversation we had. I was really excited to come here to meet him personally. It's been a good few days so far.”


Berhalter has insisted that he is not the type of manager to close doors on players to the national team and Morales is a good example where his performances simply merited a call-up to the team.

“Alfredo is a case where he’s done such a good job with Fortuna Düsseldorf, not only through the first two Bundesliga games, but we’ve seen reports from preseason where he’s been an outstanding player," Berhalter said. "It’s nice to give a guy a reward like that – an opportunity again because of how he’s performing at his club.”

Current top U.S. goalkeeper Zack Steffen recently joined Fortuna Dusseldorf on loan from Manchester City and has gotten to know Morales well. Morales has been a big help for Steffen both on and off the field as he has gotten adjusted to the team and Steffen believes that Morales can also be a big asset to the U.S. team as well.

“I remember watching him with the national team a little bit,” Steffen said. “I never met him before coming over to Dusseldorf. I mean he's an outstanding player - very physical, very poised on the ball and just very confident. He's a huge part of our team and back in Dusseldorf and I think he can really help us out here.”

While he was away from the team, Morales followed the callups and the results He watched as many games and highlights as he could and felt connected with American soccer via social media. He remembers being extremely disappointed in the failure to qualify for the 2018 World Cup but insists the time for talking about that low point is finished: “for me it's over. I think it's finished, the whole thing. You have to look forward.”

Now back with the team in New Jersey, Morales understands that just about everything is different than when he was last with the squad. Not only is there a new manager, but many in the old core have either retired or have been phased out. Little remains of his fellow “German-American” contingent (in the current camp, it is just him and his childhood friend, John Brooks that remain).

But Morales is extremely impressed by the team’s current makeup and direction. Playing in Germany, he is familiar not only with Steffen, but also players like Weston McKennie, Christian Pulisic, Josh Sargent, and the currently injured Tyler Adams.

To him, the player development has improved and this only creates more potential for the team.

“You can see the progress U.S. Soccer made over the last years. I think especially in the last five to 10 years,” Morales said. “A lot of focus is on educating players on a professional level like maybe Europe was doing this for the last 20 years, 30 years, or whatever. I think we can just be happy about it. You see that the players, especially the young players, they are so complete when they come to some first teams wherever they are in the world. It's really good. I think it's a big chance for U.S. soccer. It's going to be a nice future.”

Of course, it remains to be seen just how far into the future Morales will play a role with the U.S. team but this camp gives him an opportunity he hasn’t had in years. He is now more in control of his own fate than every before and he looks forward to potentially making his case on Friday against Mexico.

“I'm very happy,” Morales said. “First of all, of course. It's a privileged to be here, as always. I am just here ready to work.”