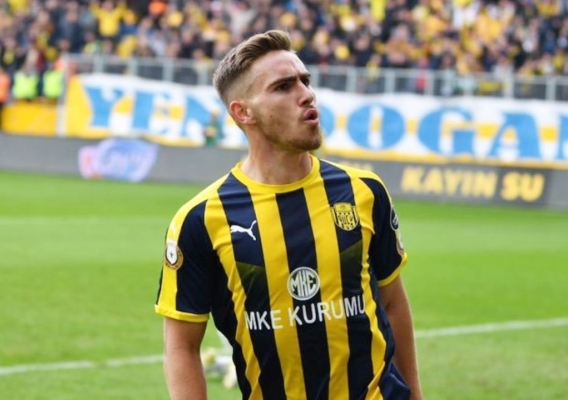 After switching to represent the U.S. team, Boyd excited for the future

Tyler Boyd put up very impressive numbers in Turkey this past season and after filing a one-time switch to play for the United States, he is excited for his future - both on the club and international levels.
BY Brian Sciaretta Posted
May 28, 2019
4:00 AM
EVERY SEASON, in any league, always has breakout performers. For winger Tyler Boyd, the 2018/19 season was memorable on many different fronts and now his future is looking promising at both the club and international levels.

Boyd, 24, came into this season after an impressive loan in 2017/18 from Vitoria Guimaraes to Tondela in the Portuguese top flight. When he returned to Guimaraes, an injury limited his time on the field. He still won the club’s Revelation Award as its top young player by virtue of the loan to Tondela.

But everything changed when he went on loan to Turkey with Ankaragucu where Boyd put up impressive offensive numbers to help ensure the club’s survival in the Super Lig. Over 13 games he scored six goals and notched four assists - many of them highlight reel quality.

“It's a very exciting time and I've been blessed to have consistent game time the last four months and put in some good performances and good statistics,” Boyd said. “So, I'm very blessed and happy with how it's all going. Going into the summer, I don't know what will happen. I'll have to see what kind of offers I have and what kind of interests I have. Obviously, I know everyone at Guimaraes and I love everyone in the city and my teammates there. It's a special place. But it's an exciting time for me to see what possibilities we have. If I stay at Guimaraes, if I have other offers - it's all up in the air at the moment.”


How does Tyler Boyd celebrate FIFA approving his switch to the #USMNT? He scores another goal for Ankaragüc for a 2-0 lead on Sivasspor (just before HT). He now has 6 goals & 4 assists in his 14th game for the club since joining on loan in January. pic.twitter.com/FOrVTWfX6l

As for the factors behind his breakout season in Turkey, Boyd doesn’t believe it was anything drastically different but credits his teammates and coaches for being in a situation where he could play a lot of minutes and have the freedom on the field to play to his strengths.

As a result, Boyd was an impact player just about every game for Ankaragucu with his best goal coming in his final game against second place Istanbul Basaksehir – when he beat Gael Clichy on a lightening quick move before firing an unstoppable left-footed shot.

“I just think the people there believed in me and they let me be me,” Boyd said. “I was playing 90 minutes almost every game and I just had the belief of the coach, the city, the players around me to do my job and do it well. Obviously, I had a great team behind me. It's a team sport so I give all the credit to the team. They set me up and they put me in a place where I could use my attributes.”

But the big story for Boyd is on the international front. Born in New Zealand, Boyd held dual nationality with the United States due to his American mother. In fact, months after he was born, he moved to Santa Ynez, California where he lived for the first decade of his life.

It was in California where his love for the game shortly took root where he attended LA Galaxy games at the Rose Bowl and even frequently watched UC Santa Barbara games where he also served as a ball boy – something that sparked his interest in soccer.

“My first inspiration was actually UCSB because they did soccer camps where I lived and I used to be the ball boy at their games,” Boyd recalled. “And then it developed into L.A. Galaxy. And they were my team growing up until I left to New Zealand. That was my inspiration as a young kid. David Beckham was another big inspiration for me and he ended up heading to the Galaxy later on in his career.”


Pretty insane goal from New Zealander-American Tyler Boyd in Turkey today to give Ankaragucu a 1-0 lead on Istanbul Basaksehir in the first half. He now has 5 goals & 4 assists in his 14th game with the club since joining on loan pic.twitter.com/zLQK0jdkr3

But Boyd’s later elected to concentrate on club soccer and declined New Zealand national team call-ups. The final attempt to call him up to the All Whites came in May 2016.

But shortly into his breakout season in Turkey, he received a call from new U.S. national team manager Gregg Berhalter where he discussed his eligibility and international interests. From there, Boyd made the decision to use his one-time switch with FIFA to make himself eligible to only play for the United States internationally.

The process was lengthy and he needed to obtain a lot of paperwork like his mother’s birth certificate, his parents’ marriage certificate, his old U.S. passports. Eventually, FIFA approved Boyd’s application and days later, Berhalter named Boyd to the preliminary 40-player roster for this summer’s Gold Cup tournament.


In the Turkish Super Liga, speedy New Zealand-American winger Tyler Boyd with nice goal for Ankaragucu against Fenerbahce. Currently 1-0 at HT. It’s been a great loan for him from Vitoria Guimaraes. pic.twitter.com/vnlvXpCM35

“It was the coach, Gregg Berhalter, who contacted me,” Boyd said. “We sort of started the process of seeing if I was eligible...It surprised me. It's been my dream for the last few years to represent the U.S. and I believed that with hard work and good performances that it could be a possibility. Now it is a possibility - if I'm chosen. So, I was playing pretty well in Turkey and I was scoring goals. I'm very happy that FIFA accepted it and now I'm looking forward to making that dream come true, if that's possible. I've made the one-time switch and now I'm an American soccer player.”

“Nothing's confirmed yet,” he added on a call-up. “I've been named in the 40-man list. So yes, anything's possible and I'm looking forward to the opportunity. If I'm given one, I'll do everything in my power to work hard and to play well for the team.”

Boyd noted how he received a lot of support from his parents in the decision and that his American mother is “incredibly proud” that he could representing the United States in the future and singing the national anthem.

“It is tough,” Boyd said. “I loved my brothers from New Zealand and my brothers on the team. But at the end of the day it was my decision to play for America and that's who I want to play for. I my stand with that decision. I don't regret it at all. I think the opportunities is incredible. And it's a huge team… It was a little bit sad leaving New Zealand because they did great things for me. I played for the U-20 team. I played a few friendly games and I had amazing experiences with them. So, I can only thank them and be grateful for everything they did to me and I still have a special spot in my heart for the New Zealand national team.”

If Boyd receives a call-up to the United States, it will truly be a new experience as he doesn’t know any of the players who have been playing with the team. But he quickly points out that he has often moved into unfamiliar settings like when he left New Zealand for Portugal as a young player and later when he moved to Turkey.

“Personally, I don't know any of them,” Boyd said of the U.S. team. “It’d be completely new to me. But my whole career has been like that. I've always been moving around the world, meeting new people, and at almost every club I went to, I didn't know anyone there. I think over my career it's prepped me for that.”

With the Turkish season over, Boyd has traveled to Los Angeles for a few days to unwind and visit friends and family. The trip might be short, however, as a Gold Cup call-up is possible in the days ahead. If the call comes, he insists he will be ready.

“I appreciate coach Gregg for reaching out to me, giving me an opportunity and the possibility - if I'm ever selected,” Boyd said. “He seems like a great coach, a great man, and I'm excited at the possibility of learning from him, and working hard for him.”