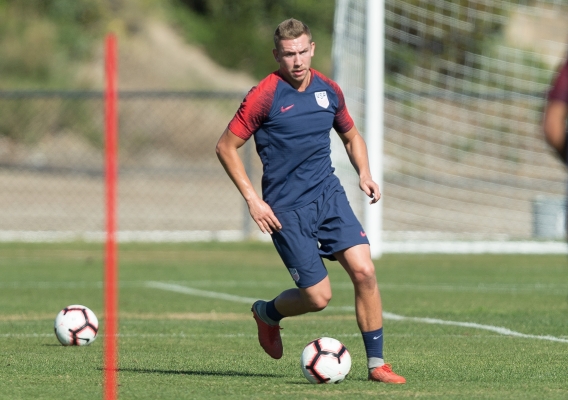 One of the most interesting players at January camp is defensive midfielder Russell Canouse who is aiming to build off his successful 2018 season with DC United and earn a spot on the U.S. national team.
BY Brian Sciaretta Posted
January 10, 2019
3:00 AM
THE UNITED STATES national team is entering in a new era, a new cycle, with a new coach. The players all have a fresh slate and manager Gregg Berhalter is using this camp to evaluate players and see who could be a fit for the team moving forward.

One of the players with a lot of potential to use this camp is midfielder Russell Canouse, 23, who enters into the camp on the heels of a wild 2018 where he missed the first half of the season with a knee injury, played very well in the second half of the season to help lead DC United to the playoffs, got married after Christmas and went on his honeymoon in Mexico (which he also spent training and preparing for the national team camp).

“Being able to get this opportunity after a tough season with really highs and really low points of my career, this is good. I am really excited to be here and ready to work my hardest. Last season started off well with January camp and it was a good experience being there. The knee injury happened and it took awhile to get back. but the season ended well. I was able to get back and make an impact with the team and make a run into the playoffs.”

Canouse was disappointed last year to not earn his first camp when interim head coach Dave Sarachan called him into camp but did not select him to play. But the Lancaster native admits that he used that as motivation to play well in 2018 to get another opportunity with the national team.

What makes Canouse an interesting player to follow in this camp is that at the moment there is a clear opportunity for him to move ahead at his position. The national team has a lot of central midfielders at the moment but few are dedicated defensive midfielders. Top young players like Weston McKennie and Tyler Adams can play as defensive midfielders but feature primarily as box-to-box players. Canouse excelled for DC United where he won balls, shielded the backline, and was crisp in his passing – and these are attributes he believes can fit well into Berhalter’s system which is based on disrupting the opponent and making quick transitions into the attack.

“I am very excited to learn his system and style of play,” Canouse said. “I think it is similar to what I grew up playing in Germany at Hoffenheim and in terms of what our Dutch coach implemented at Bochum in the 2.Bundesliga. I am excited and ready to learn a lot from him and pick up the knowledge as quick as possible so I can gel into the team and into his system right away.”

“It's the national team we're talking about,” he continued. “Any position there is always going to be competition. You're trying to represent your country and be one of the best players your country has to offer. The competition is normal. In terms of my position, being a true No. 6 defensive midfielder - a guy who can clog the lanes and start the attack from a deeper position, I think those are all things I am very capable of. I'll try to prove that in this upcoming camp and prove I belong here.”

While 2018 put Canouse firmly back on the radar for the national team, 2019 will be a critical year to stay in top form for both club and country. Expectations are higher for DC United his year after the club’s surge in the second half of the season – which was aided by the addition of Wayne Rooney, the return of Russell Canouse, and the favorable schedule which saw almost all of its games the final few months played at its brand new stadium, Audi Field.

Continued success could also open up further doors for Canouse.  In 2011, Canouse moved to Germany to sign with Hoffenheim when he was a teenager. Injuries slowed him down at key moments, such as the 2015 U-20 World Cup (where he has been the team’s captain during the cycle), and DC United approached him with an enticing offer.

As many young Americans who have made the move to Germany in recent years, Canouse did it at a time when it wasn’t as common but despite its difficulties, he believed it helped him develop tremendously.

“Moving to Germany at such a young age is a unique situation,” Canouse explained. “It's something that made me uncomfortable at an early which caused me to grow and mature at a faster rate than if I stayed stateside. It's what made me the player I am today because I did learn a lot. I was involved in a lot of different systems, tactically, with different coaches that were moving up the ranks. For some players, it is not the right move. Maybe they're not ready mentally yet to learn a new language or culture and all the other off-field things you need take care of first before you even step foot on the field to feel comfortable and truly improve as a player. I think I was able to do that.”

“Obviously moving to DC was an important step for me,” he added. “I grew up in the Hoffenheim system. I got some good playing time at Bochum on loan but the opportunity came to sign with DC United and I had to weigh a lot of different issues like playing time. I got the chance to come back to DC and make an impact and further myself in terms of my development in a league that is up and coming and improving every single year. Overall, I've been pretty happy with my decision. It's put me back on the map with regards to the national team.”

As for his future beyond DC United, Canouse is also quick to point out that a potential return to Europe is possible and that he considers all offers – which could be significant with a full and successful season with DC United as well as a spot on the national team.

“I am definitely open to all options,” Canouse pointed out. “It always comes back to being happy and being at a place where you can develop. I am happy with DC and I am enjoying my time there. There is always an opportunity to possibly go abroad and I'll consider every option. I am not keeping it closed. It might come at the right time. But for now, I am looking forward to the season with DC and trying to get back to the playoffs.”