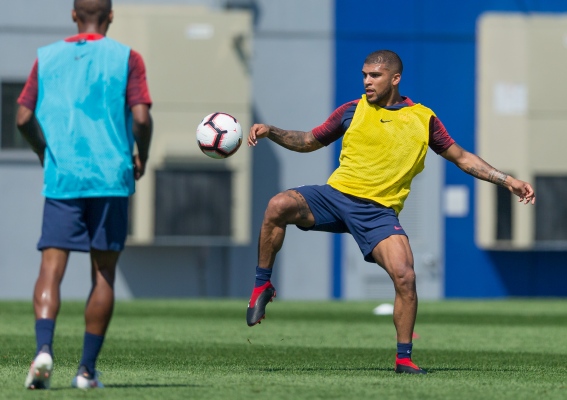 After strong start to season, Yedlin embracing new role with the USMNT

The start of the new cycle has brought about a lot of changes on the USMNT and that is true for DeAndre Yedlin who, at just 25, is now a veteran leader on a team full of many players new to the international game. Brian Sciaretta spoke to Yedlin in New Jersey.
BY Brian Sciaretta Posted
September 03, 2018
4:20 PM
WHIPPANY, N.J. – Almost exactly a year ago to the day, the United States national team was gathered in northern New Jersey at the Red Bulls training facility ahead of a critical World Cup qualifier against Costa Rica. It was an old team that featured many veterans over 30 and just about everyone had played in a World Cup.

Flash forward 12 months, the United States national is back practicing on the same field. This time, however, everything is much different. The team’s ultimate failure against Costa Rica was a big reason for its ultimate downfall and it has led to a massive overhaul of the team’s core.

DeAndre Yedlin, 25, is one of the few players that has remained in the picture after last year’s stunning loss in Trinidad – but his role on the team has changed. It wasn’t long ago when the Seattle native was considered one of the team’s youngsters whose days of being a veteran leader where still a ways off.

The abrupt ending of the 2018 qualifying campaign has forced a lot of people in American soccer to grow up faster than expected. As a result, Yedlin’s time to lead is now here. Over the course of just a few months, he is now one of the older and more experienced players on the team.

It’s a different role but Yedlin is embracing it.

“It's been like that for the last couple of camps,” Yedlin said. “I am kind of used to it by now. It's a good role to take though. It's a good young group that is hungry. I think everybody ready and excited. We have some tough games coming up.

“I am not doing stuff different,” he continued. “It's just a different perspective. When you're the younger guy, you're kind of only looking after yourself. Obviously you have to be a bit selfish in terms of what you're doing but you're the older guy you also have to look after the younger guys as well - if they're making mistakes or need help, you help them.”

U.S. interim head coach Dave Sarachan is happy to have Yedlin in the fold for a roster with an average age of 24 and just three players with World Cup experience – one of which is Yedlin and the other two are John Brooks and Julian Green.

“DeAndre, he is now one of the seasoned guys, you would say, with caps,” Sarachan explained. “I think, again, has shown a lot of maturation now in terms of his approach working with a lot of these young guys. Clearly playing 90 minutes for Newcastle speaks for itself.”

Among the young players one the roster who Yedlin can identify with is Antonee Robinson. Robinson, 20, made a strong inroads into the team earlier in the summer playing left back – and was one of the team’s best players against France.

Yedlin and Robinson have the opportunity at this camp to establish themselves as the team’s fullback pairing moving forward.

Yedlin sees the similarities in Robinson as both are speedy outside backs who were signed with big clubs in the Premier League but who also had to fight for minutes on loan. After Tottenham and a loan to Sunderland, Yedlin had to fight his way into the Premier League via earning promotion out of the Championship with Newcastle. Signed to Everton, the younger Robinson is now on loan in the Championship with Wigan.

“He's great, he reminds me a bit of myself,” Yedlin said of Robinson. “His pace is his biggest asset. We have a lot of pace on our team. What I bring to one side, he brings to the other. He likes to get forward and attack, and that's great as well. He's a great young player, he's growing every day…he's doing well in England. I am exciting to see what he can offer.”

One of the interesting developments with the U.S. team over the last slate of games in June was the use of the three-man backline with two wing backs. While Yedlin did not feature in that game, it is a formation that intrigues him and could play to his strengths in allowing him to use his speed to get forward into the attack.

“I've actually been playing it the past few games with Newcastle,” Yedlin said of playing as wingback in a three-man backline. “I think it has fit pretty well. You obviously have more of an attacking role. I wouldn't say less of a defensive role but there is a bit more cover around you. I like it, I like it a lot. I am still learning it but it seems like a fitting position for me.”

The good news for the U.S. national team ahead of the upcoming friendlies against Brazil and Mexico is that Yedlin has arrived in good form from Newcastle.

Over the weekend he scored his first Premier League goal in Newcastle’s 2-1 loss to defending champions Manchester City (an event that Yedlin described “a relief” in finally finding the back of the net in England’s top tier). A week before that, he was on the wrong end of a fluky own-goal in a 2-1 loss to Chelsea but still played well and had an impressive assist.

Yedlin, however, feels lucky to even be able to playing in these games. It was less than a month ago, Yedlin was forced out of Newcastle’s season opening loss to Tottenham in stoppage time with what looked like a very serious knee injury. Immediately it appeared as if his season was over just as soon as it begun.

“As soon as it happened, I was like: it's going to be bad,” Yedlin recalled. “The doctor said: 'I am going to be quite blunt with you but based on the video, it looked pretty bad.' I was just hoping that it wouldn't be swollen in the morning. Luckily when I woke up, it really wasn't swollen at all. I went in for an MRI and the results showed that it was literally nothing. I am not really sure what happened but I am thankful whatever saved it and hopefully nothing like that ever happens again.”

“It’s great. We obviously want to put the past behind us and we all know what happened,” Yedlin said. “It’s kind of a clean slate, a fresh start. I am excited for that.”