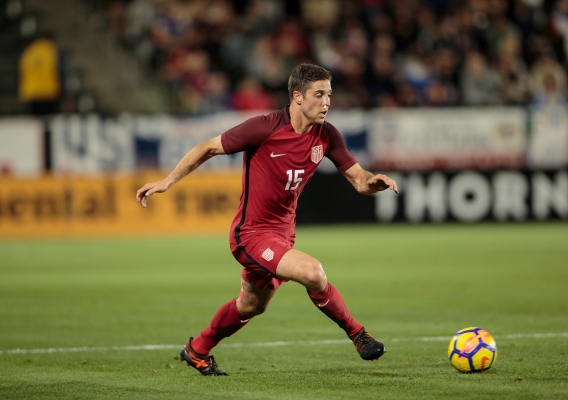 Matt Polster has always dreamed of playing for a big European club and in January he got the chance when his relationship with Steven Gerrard helped pave the way for a successful trial and a contract. ASN's Brian Sciaretta spoke with the Las Vegas product about the move
BY Posted
February 07, 2019
3:00 PM

THE ANNUAL United States national team January camp is typically an opportunity where many players hope to impress the head coach to build a case to be part of future rosters for important competitions. Matt Polster earned his first ever U.S. call-up for the 2016 January camp and while Jurgen Klinsmann did not play him in either the Canada or Iceland friendly, it turned out to be a turning point for the young American as he met his future and now current coach, Steven Gerrard.

In 2016, Polster earned the call-up after a strong rookie season for the Chicago Fire – who drafted him with the seventh pick in 2015 following his impressive run with Southern Illinois University Edwardsville (where Polster famously teared up at the draft). As January camp took place in Southern California, he came into contact with the Liverpool legend who was entering into the final year of his playing career with the LA Galaxy.

Over the course of the next three years, they stayed in touch and that proved fruitful as Gerrard became manager of Rangers FC and Polster finished his contract with the Chicago Fire after a 2018 season where he played just three games due to an MCL injury.

“He was someone who I idolized from a young age,” Polster said. “It was cool and we built a relationship from there. Once he got the manager job here, I expressed interest to be part of a big club. He kind of felt the same. Things weren't going the way I wanted in 2018 but we still kept in touch and I let him know how I was progressing through the injury. When it came time, he gave me the chance to come over to Glasgow.”

But due to the amount of time he missed in 2018 during the final year of his Chicago contract, Polster had to impress on trial before he would be offered a contract by the club which currently sits in second place. He first went on a trial in Glasgow but the first team was occupied with games. He later traveled for a second trial in Tenerife during the club’s winter break camp.

In Tenerife, Polster was sharp his long absence away from the game. As a versatile player, Polster played one training session in central midfield and the rest at right back.  Afterward the club and his agents worked out an offer for a two and a half year deal which Polster says he signed “really quickly.”

After that, Polster also had to go through the tricky process of obtaining a U.K. Work Permit. Lacking the required number of caps with the U.S. team to be granted a permit automatically, he had to win one through appeal. While the appeals process is easier in Scotland than England, Polster still had to convince the board that he was better than current options in Scotland.

For this, Polster had high-profile help in his corner. World Cup and Champions League winner Bastian Schweinsteiger, who was Polster’s teammate in Chicago, e-mailed a letter of recommendation. Former U.S. national team captain Carlos Bocanegra who played for both the Rangers and Chicago also spoke in his favor. It proved successful and he won a permit.

“Obviously it’s a little nerve wracking trying to get your work permit because the club and I both agreed that I can become a Ranger player but now it’s up to the outside world to agree,” Polster explained. “Obviously, you also get eternal help too… Basti [Schweinsteiger] put together a little e-mail together. Bocanegra called and said nice things. A couple of coaches within MLS also said nice things.”

Bocanegra, who has frequently said that playing for Rangers was a career highlight, is optimistic that Polster can be the next American to succeed at the club – following the likes of himself, Claudio Reyna, Maurice Edu, Emerson Hyndman, and DaMarcus Beasley.

“He’s a hard-working guy who can play in midfield or at right-back,” Bocanegra said of Polster. “He’s an excellent player with a lot of qualities. I’m sure he’d be suited to Scottish football and he’s now got the chance to join one of the biggest clubs in the world.”

As of now, Polster does not know when he will be ready for the Rangers’ first team as he is still not fully match fit. On Wednesday, Polster played his first reserve team match for Rangers.

“I don't know how much longer or what they have planned exactly but I've have been doing sessions in the morning and then running in the afternoon,” Polster said. “So I have been progressing with my fitness quite a bit and it has been going really well so far.”

While Polster is in Scotland focused on his new club, he is not completely removed from the United States national team either. In January 2018, Polster earned his first, and so far only, national team cap in a scoreless draw with Bosnia and Herzegovina.

Last week he watched the team win its first two friendlies under new manager Gregg Berhalter. Polster is very familiar with Berhalter and is optimistic that his move to Rangers will help raise his level and boost his visibility to allow him to compete with DeAndre Yedlin, Nick Lima, and Reggie Cannon at the right back position.

“I think Berhalter was the best option for the national team,” Polster said. “I really like how he prepares his team. I’ve chatted with Wil Trapp and he’s only expressed how detailed he is and how he invests everything into the team. He has a structure and it’s something I like. Playing Columbus was always so difficult with how structured the team was. The way I watched them against Panama and Costa Rica, the style and system they’re playing is something that definitely suits me. As a wingback I like to tuck in and play center mid. I did that a lot with Chicago in 2017. Coming here to Rangers I think helps me because I am in a competitive environment. I believe I can play at the national team level. I know that.”

For now, however, his is satisfied with where his career has taken him so far. At 25, he is on the older side of Americans to be making his first jump to Europe but others like Geoff Cameron have had success at even older ages.

Polster is happy with the platform MLS gave him coming out of college but moving to Europe to play has always been a lifelong goal. Born in Wisconsin but raised in Las Vegas, Polster grew up a Liverpool fan and will get a chance to play for Gerrard and in front of a packed Ibrox Stadium on a regular basis. It’s a far cry from a Chicago Fire team that struggled mightily in recent years and is falling behind the league’s more ambitious and popular teams.

“My aspirations were always to play in Europe,” Polster emphasized. “MLS is a great league and it is really progressing but MLS isn’t what I wanted to do initially. Coming out of college, you don’t have a resume to make that jump to Europe, so going to MLS is really the only option. I think MLS knows that because that is how the deal structures are the way they are. There is no negotiating when you come into the league. For me, this has always been a dream. With how things played out in Chicago, I was there for four years. Most of it was difficult because there was so much turnover and transition every year. I wanted to be part of a competitive team where standards are high and expectations are high. That is Rangers. In my opinion it was an easy decision, yes.”

Of the many American players who have come through Rangers, Maruice Edu was the only other who joined the club directly from MLS. For him, he recalls the unparalleled emphasis on winning and believes Polster will benefit from not only that, but the bond that exists between the players and the supporters.

"I think he has the quality to go there and do well but it is going to be a challenge but it’s a challenge I think Matt will appreciate," Edu said. "Rangers is a massive club. One of the things I appreciated was the emphasis on winning. It's not just about trophies, it's about winning every game. That is something you don't get everywhere, even the Premier League where some teams are just trying to stay afloat. With the supporters, they are tuned into every aspect of the club. They're going to know about your background. They're going to know Matt used to be a center midfielder and now he's a fullback. It is cool to go into a culture like that where they live and breathe football. It's something that I think Matt will appreciate. It's also a family club. Once you walk through those doors and show you are willing to compete and lay it all on the line for the club, they are so supportive. Once you are part of it, you are part of it for life. I still get messages from fans. It's a club that is still very close to me and I still have a lot of affinity for that club. I'll always support them."

As he closes one chapter of his career and opens another, Polster echoes Edu’s thoughts and goes into this phase with high expectations that he can live up to the lofty standards and emerge as a better player.

“It’s definitely a change,” Polster said. “In Chicago you could kind of get away with certain things. I am not trying to speak bad but there was a stretch where we lost so many games in a row and it wasn’t really in any paper or any article. We weren’t even getting criticized. Here, you can’t even lose one game in a row. The expectations are very high. It’s definitely something I’ve always to be part of.”