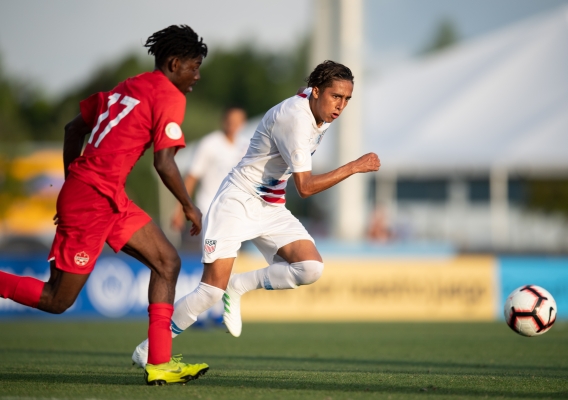 After rise with Sounders, Leyva & Ocampo-Chavez ambitious with U.S. U-17s

Daniel Leyva and Alfonso Ocampo-Chavez have had important moments together in 2019 after winning the GA Cup with the Sounders academy team, signing homegrown deals, and now in the middle of U-17 World Cup qualifying. ASN's Brian Sciaretta spoke with the duo on their rise this year and the ambitions in the future.
BY Brian Sciaretta Posted
May 08, 2019
8:00 AM
TO SAY THE PAST two months have been a whirlwind for Daniel Leyva and Alfonso Ocampo-Chavez would be an understatement. As both individuals and teammates, the two have achieved a lot recently but the next few two days will see them play the most important games of their careers to date.

Both Leyva and Ocampo-Chavez have come up through the Seattle Sounders academy and have been playing for its reserve team, the Tacoma Defiance, in the USL. But the two were also teammates last month at the GA Cup where the Seattle Sounders U-17 team defeated some of the best academies in the world in Flamengo, River Plate, West Ham, and Valencia to become the first MLS team to win the tournament.

After the 1-0 win over Valencia in the final, Leyva was named the tournament’s MVP and Ocampo-Chavez was awarded the Golden Boot as the leading scorer with six goals and one assist.

Recently, the two signed first-team homegrown contracts with the Seattle Sounders and are teammates on the United States U-17 team that has reached a critical phase of qualifying where it must win two games in a row to qualify for the World Cup.

“It's been very exciting these past two months,” Leyva told ASN from Florida. “Everything is happening very fast - now being part of the first team more and being here with the national team. Getting all those experiences and learning from everyone.”

“Before the GA Cup, us as an academy team for the Seattle Sounders we have a very good team, so we had to have the right mindset into the GA Cup,” Ocampo-Chavez said. “We just tried to play with everything we have and leave it all on the field. I just tried to help in all areas - making runs, helping to keep the ball, scoring goals. That's my job. After the week at GA, I felt more confident on the field and more mature off it because I had to be leader on the team because with me, Leyva, and a few others, we were the ones who had pro contracts already. We felt we had a bigger responsibility with that team.

“Coming into qualifiers, I feel like I have more confidence now,” he continued. “I want to help the team out scoring goals, with my hold up play and as an overall player both on and off the field.”

The two have delivered so far at the CONCACAF qualifying tournament in Florida. Ocampo-Chavez scored in the 6-1 win over Barbados and added another in the group stage finale, a 3-0 win over Guatemala. Meanwhile, Leyva has been an asset in the midfield – both starting and off the bench.

For both players, however, the turning point came in the first game when the U.S. fell behind Canada after conceding the first goals. For a youth team, however, the team was mature and did not panic. Instead it calmly asserted itself in the second and won 3-2.

Ocampo-Chavez cites new head coach Raphael Wicky as being a catalyst of the team’s response against Canada and as being a positive leader who can rally the team despite being new to the team and only having been hired in March.

“For us, as players, we really look up to him because he knows what he is talking about,” Ocampo-Chavez said. “We have a lot of confidence in him. He is a good man on and off the field and he gives us his ideas. If we listen to him, we will be successful. He's a great coach. Of course, he coached in the Champions League. He has great experience after playing with Atletico Madrid and others.”

Following the U-17 tournament, Ocampo-Chavez and Leyva will return to Seattle where they are now on first team contracts. Both are expected to continue to play with Tacoma but both cite first-team opportunities with the Sounders as another top goal in 2019 in addition to the U-17 World Cup in May.

If it comes to fruition it would be yet another milestone the two have reached together.

The decision of where highly-rated young American players should begin their careers has been a major point of discussion in American soccer. In recent years, several players who developed in MLS academies left for European teams on free transfers but in 2019, a lot of young players have been earning significant minutes and there have also been some high-profile sales to Europe.

For both Ocampo-Chavez and Leyva, the decision to sign with Seattle came from positive experiences within the academy and in discussions with the club over their roles moving forward.

“I definitely talked with them about that and the opportunities they would give me,” Leyva said. “But I felt that with the Tacoma and now with the first team - I feel I will get that opportunity soon. Ever since I first joined the Sounders, they made the decision easy. All the development they implemented in me since I was 14 years old, I really liked how the club watched out for the players and implemented a plan to make them better - to move them up the ranks, play above their age and gain experience…It made me feel that this is the club where I can develop the best.”

For now, however, the focus for both is on getting the team qualified with a semifinal appearance along with winning the tournament and being named the U-17 champions of CONCACAF.

On a personal note, it could be an interesting occasion if the United States meets archrivals Mexico in the finals. The two nationals the usual favorites in CONCACAF competitions and the wave of improved Mexican-American players who are eligible for either nation has only added fuel to the rivalry.

Ocampo-Chavez and Leyva are both Mexican American and have unique stories. Leyva’s father once played for the academy team of Mexico’s storied Club America before earning a civil engineering degree in Mexico and moving to Las Vegas 19 years ago – the city where Leyva grew up. Both of Ocampo-Chavez’s are from Mexico but move to California where their son grew up and developed as a player before joining the Sounders academy.


3-0 USA! Great cross by Danny Leyva to set up his Seattle Sounders teammate Alfonso Ocampo Chavez, who buries his 2nd of the tournament from close range. pic.twitter.com/g0QfbOm8Ny

Ocampo-Chavez’s background highlights the complexities and the uniqueness of rivalry between the two nations in soccer. While he grew up supporting Mexico, he took honor in the opportunity to play for the United States. Now he would relish the chance to face El Tri in a meaningful game.

“My parents supported Mexico, especially me, I supported Mexico,” Ocampo-Chavez said. “For me, it was whoever was going to give me a chance. I was going to take it. Right now, the US gave me a chance…Since I got the callup to the United States, I feel like this is my future and they are supporting me. I love the support from parents and I even have family in Mexico that is supporting me. I am really looking forward to hopefully playing against Mexico.”

“At this tournament we can make it far,” he added. “But it is up to us to be the champions.”