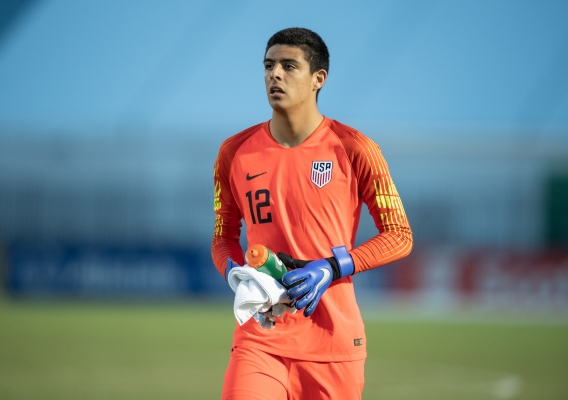 The U.S. U-20 team will face France on Tuesday in the round of 16 of the World Cup. But that is possible thanks to a big effort from David Ochoa in the group stages. ASN's Brian Sciaretta spoke with the goalkeeper about the tournament, his development, and goals for the future.
BY Brian Sciaretta Posted
June 03, 2019
11:25 AM
THE UNITED STATES will take on a highly rated French team on Tuesday in the Round of 16 at the U-20 World Cup and the team advanced last week following a tricky 1-0 win over Qatar. A big reason why the Americas were able to walk way from that game with a full three points is young goalkeeper David Ochoa.

Ochoa, 18, made his first start in the tournament against Qatar with the U.S. team needing a win. Brady Scott had started the first two games but head coach Tab Ramos told Ochoa that he would get a start in the group stages.

But with the stakes enormous, Qatar was a more difficult opponent than anticipated and Ochoa made the play of the game in the 36th minute when a poor turnover from Aboubacar Keita sprung a 2v1 for Qatar. A quick pass to the middle from Abdullah Murisi forced Ochoa to make a huge save from close range on Hashim Ali.

“Coming into the game, I was a bit nervous,” Ochoa told ASN from Poland. “But as soon as I made the first save and the second, I kind of eased into it and started to feel confident in myself again. Right after that save, that's when I start to feel like really good about myself.”

Ochoa, a native of Oxnard, Calif., is one of the youngest players on the U.S. U-20 team and along with Konrad de la Fuente, Ulysses Llanez, and Julian Araujo, he is eligible for the 2021 U-20 World Cup as well. It is not rare for players to play up a cycle but it is particularly rare for the starting goalkeeper in a major youth tournament to be so young.

But despite being one of the team’s youngest players, Ochoa’s teammates are confident in his ability.

“We're confident in all of our goalkeepers,” central defender Chris Richards said. “But the game Ochoa had for us against Qatar - I mean he's really good with his feet and of course he's a very good shot stopper. You saw in the first half he saved a quick 1v1. It's pretty early in the game which could easily change the dynamic of the game. But it was really impressive from him. But just being so young it was extra impressive.”

It is not yet known who will start the knockout game against France but Ochoa insists he will be ready if called upon to help his team advance to the quarterfinal against Ecuador.

But regardless, Ochoa insists that this U-20 cycle has been great for him in terms of his development – which he believes has surpasses his expectations and gives him a head start heading into next cycle as well.

“Ever since the start of the cycle, the goalkeeper coach told me I would be the number three, get some get some experience at the World Cup but obviously I had some good performances and got bumped up to number two,” Ochoa said. “It really helps me a lot playing with older guys. It helps me with the experience, getting better every day in training. It's been really good - especially playing two years up. I've really enjoyed this cycle and hopefully we can take it all the way.”

On the U.S. team, Ochoa is one of several players with Mexican heritage who has played very well in Poland. The Mexican – U.S. rivalry in soccer and for players is intense and Ochoa recalls how he used to support El Tri as a child. But his perspective has changed and playing with this team has played a part in that.

“It was kind of a tough decision,” Ochoa said. “Especially since growing up you you're supporting Mexico. It was pretty tough but at the end of the day my parents are Mexican but I'm American. So and I actually feel more comfortable and I'm actually happy with where I am at right now. My parents are very supportive, so that's cool.”

But the national team has only played a part in Ochoa’s development as his club situation is also solid. Over the off season, Ochoa signed his first professional contract with Real Salt Lake and so far this season he has been a regular starter for the club’s USL team, the Real Monarchs.

Last year, Ochoa actually had options abroad but elected to sign with Real Salt Lake because of its pathway to first team soccer and meaningful minutes.

Hearing that US U-18 GK David Ochoa has been training with Manchester United since early last week. I’ve been told he has trials planned with a few Spanish and German giants following the upcoming U-18 tournament in Czech Republic.

“I'm actually really happy where I'm at right now,” Ochoa said. “I train with the first team and then on the weekends I play with the Monarchs. It's good to get games and build my confidence up. And ultimately that kind of helped me to be where I'm at right now. My decision to sign with RSL was pretty easy. It was a club that that was good to me since day one - ever since the academy. They were really interested in me. They saw me as the future.”

And, of course, the Real Salt Lake goalkeeping position will be up in the air next year as Nick Rimando has announced that the 2019 season will be his last as a professional. Rimando is the most legendary goalkeeper in the history of MLS as he currently holds the league’s record for career shutouts, wins, saves, and appearances. He’s also one of the league’s most respected players.

Ochoa has spent a lot of time working with Rimando and learning from him to improve. Next, he hopes to be able to follow in his footsteps and earn the number one spot at Real Salt Lake – which would be a huge step in his development moving forward and make him the youngest American goalkeeper with a starting first team job.


“All the time,” Ochoa said of Rimando. “He's always trying to help me. Ever since I joined them in pre-season he's always been there correcting me in little stuff and trying to help me. It's an honor to work every day with him back at my club. He's played a big part in this. For sure, I want to be the number one after him. It's all on me – I just have to keep working hard.”