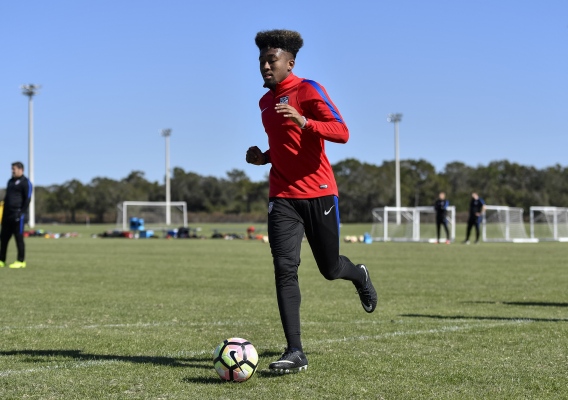 After joining Hannover 96, Gloster looking to boost the U.S. U-20 team

The United States U-20 team recently completed a camp in North Carolina that saw several top prospects make their debuts for the team. One of them was Montclair, NJ native Chris Gloster who is looking to claim the left back spot. ASN's Brian Sciaretta spoke with him recently.
BY Brian Sciaretta Posted
July 23, 2018
12:20 PM
THE UNITED STATES U-20 national team wrapped up its camp in North Carolina over the weekend leaving just one more camp ahead of November’s World Cup qualifying tournament. At the Raleigh gathering, head coach Tab Ramos brought in several newcomers to expand the player pool and one was Chris Gloster.

Gloster, who will turn 18 this week, is a veteran of U.S. youth national teams and was the starting left back last year at the U-17 World Cup. In 2018 the Montclair, N.J. native has featured with the U.S. U-19 team at the Slovakia Cup but this is his first step up to the U-20 team.

“It's been great,” Gloster told ASN from North Carolina. “I played a full 90 minutes [against North Carolina FC]. It feels great to be here with the U-20's and in an environment with older players and better players. It is a good feeling.
In terms of mentality, it is not different from the U-17’s, because you still have to stay so focused and take care of yourself. On the field, it is more mature. The principles stay the same but it is more mature.”

The 2017 U-17 World Cup team has progressed very well since that tournament. Josh Sargent and Tim Weah have both earned their first cap for the full United States national team. Other players like Andrew Carleton and Chris Durkin are expected to feature regularly for the U.S. U-20 team with Durkin being one of the top newcomers in MLS this season for DC United.

Meanwhile Sergino Dest and lately, George Acosta, have also featured for the U-20 team this cycle and could be part of the plans moving forward. Even a player like Sebastian Soto, who did not make the U-17 team last year, is now considered a high level prospect for the U-20 team.

In North Carolina, Gloster has enjoyed meeting up with some of his former U-17 teammates and has been impressed by their progress. There is still a tight bond between players from that cycle and together, they believe they can boost the U-20 team which is coming off of two consecutive runs to the quarterfinal of World Cups.

“It's good to have a few players from the U-17s here because they know how I play and I know how they play so it's easier for us to connect with each other,” Gloster said. “Then when the whole team understands what we do, it just makes it easier for the whole team.”

“I just always thought that the 2000 cycle has always been a great cycle,” he added. “It's always been a great group of players that just push each other to go to the max and I just think seeing Josh Sargent and Tim Weah, we always pushed them to do their best and they're now with the first team. Now other players from the U-17's are with the U-20s and I just think the 2000's push each other both on and off the field. They push each other to focus and have a good mentality to do their best and give 100%.”

While the last year’s U-17’s have taken major strides which are encouraging for U.S. Soccer and U-20 head coach Tab Ramos, they are joined by players from the older 1999 birth year which are also aiming to carry the load for the current U-20 team.

For Gloster, this camp was the first time he had ever played with or even met many of the players from the 1999 group and he came away very impressed and realized competition for a roster spot on the U-20 team is going to be tight. In particular FC Dallas playmaker Paxton Pomykal and NC State winger/right back Manny Perez left a positive impression for Gloster

“Someone that really stood out to me was Paxton [Pomykal],” Gloster said. “I've never worked with him before and this is my first camp with him. He's been really standing out and really showing himself as a leader. Same with Manny Perez, I've never played with him before but he's doing really well here. Lennard [Maloney] is actually doing really well. Obviously it might take him a little longer to get used to the team because he's used to German players and the language but he's doing alright for someone who is coming from the German national teams to the U.S national teams.”

Following camp, Gloster will head to Germany to begin his first full season with Hannover 96 who he signed with in March. Like many top players of his age, he had a difficult choice as to where to begin his professional career.

Gloster was the product of the New York Red Bulls system and he played with their youth teams since the age of 12. In 2016, he started for the club’s USL team and became the youngest American player at the time to start in a USL match.

But his time with the U-17 team opened doors and put the spotlight on him for European teams. It was a tough decision but he felt the best fit at this time was with the German club.

“It was really hard,” Gloster explained. “I also have a lot of friends at the Red Bulls that I've played with since I was 12 and the Red Bulls made me into the player I am today. They developed me since I was 12. So it was hard to choose between the Red Bulls and Hannover. But I think for myself if I want to make that next step and make the next jump, it was important for me to go to Hannover.

“The players at the club and the coaches made it so easy for me to just bond with the team,” he continued. “They almost made it feel like home. The players really brought me in from the first moment I got there. They were always talking to me and helping to get used to the training and explaining everything to me. My goals this year for [Hannover's] U-23's is to have my starting spot set in stone and hopefully during the season be able to train with the first team.”

But like last year, this year will also offer another opportunity internationally. Gloster was quick to point out that there have not been any discussions between Tab Ramos and Hannover about releasing him for U-20 World Cup qualifying in November. But he also added that he hopes the club will release him should Ramos want select him for the team.

Like many young American players international play is very important to Gloster and he wants to be part of the generation that heals the wounds left by the national team’s failure to qualify for the World Cup in 2018 and raise the profile of American soccer to new heights.

It is expected that Ramos will have a difficult time getting all of his top players for the World Cup like he did in 2017 when Christian Pulisic and Weston McKennie were unable to play. In 2019, there will be questions about Weah, Sargent, Tyler Adams and others. Regardless of who shows up, Gloster is confident the team can make a run in Poland.

“Tab is a great coach,” Gloster said. “He knows his stuff. Even with the short timing of this U-20 camp, he's made my game that much better by telling me to always take my first touch forward and go forward to attack players. He's explained it a lot easier than other coaches have. Tab makes it easy for me to understand what I have to do and what, as a left back, my goals are and what I need to accomplish on the field.