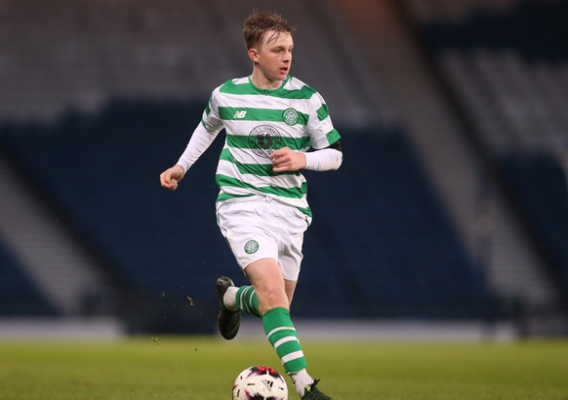 After deciding for the U.S., Celtic's Harper eager for strong U-20 start

The 2021 U-20 cycle has begun with a camp in Slovenia, and Celtic winger Cameron Harper is eager to establish himself within the team's new core. ASN's Brian Sciaretta spoke with the Sacramento native on his move to Celtic and the new U-20 team under Tab Ramos.
BY Brian Sciaretta Posted
September 03, 2019
12:00 PM
IN WHAT HAS been a dark few years for the United States national team, an overlooked story has been the impressive performances of U.S. youth national teams which have been achieving results on the field and churning out quality prospects at an impressive rate over the past five years. Each of the recent three editions U-17 and U-20 national teams have helped produce the what is the new core of the full national team.

On Monday, the U.S. U-20 team opened its 2021 cycle in Slovenia and it will be the fifth under head coach Tab Ramos – and the last three have advanced to the quarterfinals of the World Cup while producing players like Tyler Adams, Sergino Dest, Josh Sargent, Tim Weah, Matt Miazga, Paul Arriola, Zack Steffen, Paxton Pomykal, and other players like Weston McKennie, and Christian Pulisic who were not released for the competition.

The new roster consists of 2001-born players and there are several players which Ramos is excited to have on board. Celtic winger Cameron Harper is one of these promising players who is at this new U-20 core that will aim to help the program continue its success into its eighth straight year.

“I am quite excited for it. At the last U-18 camp, obviously Tab coached it. I saw it as an early chance to impress,” Harper told ASN. “I watched that U-20 World Cup and I watched them compete in CONCACAF. I saw how good of a team they were. Tab is obviously doing something right. To knockout France from the World Cup was quite a shock. But he's doing something right and I saw that when I went to the last camp. He is very direct in the way he wants you to get forward once you get ball. It doesn't get better than that. It's especially good for how I feel I play and how a lot of the players in our cycle play. They are very direct, they're very good on the ball, and they're very good to go at defenders.”

Each U-20 team under Ramos has been unique with each having different strengths and weaknesses. The 2015 team produced solid goalkeepers and central defenders. The 2017 team was once again solid in central defense but also in defensive midfield with Adams and at forward with Josh Sargent, Jeremy Ebobisse, and Emmanuel Sabbi. The 2019 was loaded in central midfield while also having promising fullbacks on both sides.

The 2021 cycle at first glimpse looks like it will be the cycle of wingers. Both young wingers from 2019 in Ulysses Llanez and Konrad de la Fuente should return. But they will be joined by Harper and others currently at the U-17 level like Gio Reyna who could move up.

But Harper is traditional winger who is right-footed but comfortable with his left and doesn’t have a preference for a side of the field. He likes to play out wide, get into 1v1 situations against defenders, make runs, cut inside for shots, or stay out wide to hit crosses. Like many in his age-group, he is confident like those in recent cycles.

“You can see of the boys from previous camps that they're very confident their ability,” Harper said of the other 2001-born players. “They know the talent that they possess. They know what they can do. We have quite a while until the next World Cup. It's two years. If you don't start well there's time to improve and get to know each other, get to know your fellow players, your coaches. As of now I'm not too sure what to expect but over the next few months, you'll see how everyone progresses and how the team does.”

Harper, 17, developed at the well-known Pateadores Soccer Club in Southern California and his performances there got him in the picture with U.S. youth teams – starting with the U-16 team.

It was with the U-16 team at the 2016 IMG Cup where he drew the attention of a Celtic scout who arranged for a trial later in 2017. Celtic were impressed by Harper on trial and he eventually joined the club.


Celtic were defeated by Rangers in the Scottish Youth Cup final last week, but US Youth international Cameron Harper scored a nicely taken goal. Great composure here to slot it past the keeper pic.twitter.com/MdykQWlqFq

His first season at Celtic was a success with the club’s U-18 team where he played in a Youth Cup final (scoring a goal in a loss to Rangers) and a Glasgow Cup final. This year he is pushing onto the club’s reserve team with the ambition of hopefully making his first-team debut within reach. In the current preseason he trained with the first team.

“This year I've kicked onto the reserves,” Haper said of his situation at Celtic. “There is not really an age group for it. It's boys under 18, you have some first team players who come down. So it's a really mixed age group anywhere from 17 to 21 or 22. You’ve got a lot of really good players, a lot of older players that you are competing against… In the meantime I am just trying to learn as much from these guys because they have a lot more experience than I do. Yes, I'm enjoying it. Yes, it's a real challenge. I am progressing.”


“My main priority is to get into the reserve team, become more comfortable playing up an age group,” he added. “The players get better, everyone is faster, they're stronger, they're smarter. But you always have to have one goal that is something that you really need to strive for. You don't know if it's going to happen but it's something that could happen. That is my first team debut. If I can kick on throughout the next few months and get a first team debut, that's the one target.”

While many top American prospects have made their way overseas in recent years, Harper’s move to Celtic was a bit of a homecoming. Harper was born in Sacramento and raised in Southern California but has parents who moved to California before he was born.

Scotland has always been close to Harper’s heart as he lots of family in the area and his father’s family have a history of being passionate Celtic supporters. Today, his mother and sister live with him in Scotland while his brother and father live back in California.

Harper put a lot of thought into the decision and consulted with his family who helped him weigh various factors but eventually left it completely up to him, without pressure. In the end, he confidently concluded the United States was who he wanted to represent. Playing for the U.S. U-18 camp that window paved the way for his inclusion to the first U-20 roster of the cycle.

“We kind of went through the pros and cons, drawn to both camps,” Harper said. “In the end, my mom and my dad were just kind of like: all right. it's fully up to you. Playing for your country is quite a big deal. It's not something that you take for granted.

“It was something that I really took into consideration, obviously, because you just never know what's going to happen,” he concluded. “You have to keep all your options open. At the end of the day, getting into that U.S. squad is what I was targeting. I picked the US and I don't regret it. I feel like at that camp I got Tab's eye on me. It helped get me into this camp. The U.S was the one I wanted to go for because that's where I've been born. That's where I was raised. The U.S is my priority right now.”