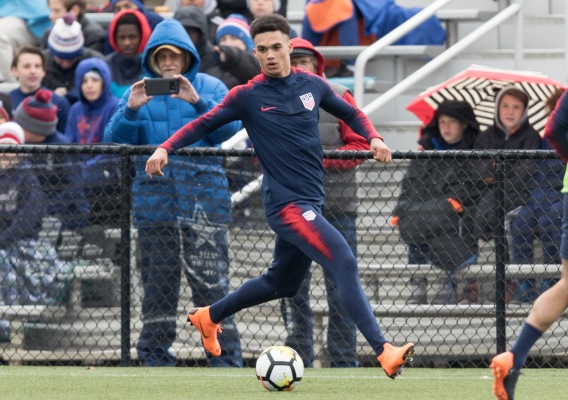 After Bolton breakthrough, Robinson aims for a bright USMNT future

Since overcoming a career-threatening injury, Antonee Robinson has seized every opportunity that has come his way: first with Everton's U-23 team and then with Bolton in a tough relegation fight. Now the English-born American left back is aiming for a a similar breakthrough with the USMNT.
BY Brian Sciaretta Posted
March 27, 2018
5:00 AM
WHEN UNITED STATES interim head coach Dave Sarachan met with the media on Monday in Cary, he stressed that the roster he named for the friendly against Paraguay was created with an eye towards the future. He pointed out that the young players now on the team are ones he believes can be significant contributors in the years ahead.

For left back Antonee Robinson, 20, the opportunity to make inroads with the U.S. team is not lost on him. But for the English-born American, this is nothing new. Since making a successful return from a career-threatening knee injury in 2016, he has been given several important opportunities – and so far he has taken advantage of each one.

Following a difficult microfracture surgery in 2015, Robinson was in the final year of his contract with Everton. Despite the difficult nature of that surgery, Everton extended his deal to give him the opportunity to comeback. In the 2016/17 season, he made the most of it and helped Everton win the U-23 Premier League.

Then this current season he was loaned to Bolton Wanderers in the Championship. The newly promoted club was expected to be in a relegation fight this season and for the first three months of the season, relegation looked likely.

But when Robinson broke into the starting lineup in October, the team started to win and climb away from the relegation zone. So far in 2017/18 he has played over 2000 minutes and the club is currently six points clear of the drop zone.

Robinson’s success with Bolton has provided him with yet another significant opportunity – with the full U.S. national team for its friendly against Paraguay. It is his first major test at the international level but for Robinson, he believes he is ready.

“It is a lot to all take in but the adjustment is not too hard,” Robinson told ASN from Cary. “My dad is a coach and he’s always told me it doesn’t take long in life for things to change. I can go from academy football to the first team and then to international football. It’s just something every professional football or has to be prepared for.”

The call-up came as huge surprise for Robinson. His lone involvement with the United States came in a U-18 camp in 2014 but he faded from the picture following his knee injury.

Robinson was born and raised England but rarely returns to the United States. His last visit stateside was four years ago to take part in the Dallas Cup with an Everton youth team. With a low profile in the United States, he was unsure if he was even on the radar. That changed, however, when Sarachan called him unexpectedly.

“We were all very surprised,” Robinson recalled. “I remember when I got the call from Dave I was very excited. And straightaway I called my mom and she was [thrilled]. The whole family got together. It was the moment I’ve been playing for my whole career to get that first senior national team cap.”

The site of his first national team camp is also fitting for Robinson. His father, Marlon Robinson, was born in England but moved to New York for grade school.

The elder Robinson blossomed as a soccer player at White Planes High School. He eventually became a U.S. citizen and then went onto play for a top ranked Duke team in nearby Durham. The current coach of Duke, John Kerr Jr., was a teammate of Marlon and might attend the game. Unfortunately due to work requirements, Marlon will not be able to attend but Antonee’s mother will be there.

But so far, Robinson has been impressed with the camp over the past week. In particular, he has taken time adjusting to the difference of styles between Bolton and the U.S. team.

“Antonee came to my attention not that long ago. He was born in England, but knowing that he could represent the U.S., I started watching some of his matches,” Sarachan said on U.S. Soccer’s website. “Right now he’s on loan to Bolton from Everton – and for the most part has been playing very consistently as a left back in a couple different systems. That is also a position over the years with our National Team where we’ve never had a great deal of depth.”

“Antonee has a lot of quality,” Sarachan added. “He’s comfortable on the ball, has good speed, decent size and is seeing regular minutes with Bolton in an environment where he’s learning all the time and there’s some pressure there. He’s an intriguing one that could add to the pool of players in a younger category for the future.”

As a speedy left back, he is prepared to push into the attack for the U.S. team and with DeAndre Yedlin on the right side, it could be one of the fastest fullback pairings the U.S. team has had in recent years.

“It’s been very good. It’s been interesting,” Robinson explained. “I don’t know many of the players but they are all very welcoming…The style of play is actually quite different. At Bolton it’s quite a more direct team. Here it’s a lot more possession paste. We like to play out of the back and keep the ball. But I am adjusting to it..They give the fullbacks a lot of freedom to get involved and be involved in the attack.”

While the style of play has surprised him, the quality of play has not. Robinson was expecting the U.S. team to be of high quality and so far he has not been disappointed. All of this leaves him optimistic for Tuesday’s game and for the team’s future.

“There are a lot of people I have become friends with,” Robinson said. “My roommate Tim Weah, he has become a good friend. Obviously it’s a young group so we’re all into similar stuff. Carter-Vickers is from England as well he has welcomed me into the group and obviously he’s been with the youth set up for quite some time. But the quality is high and I expected it to be quite high. I didn’t know too many of the players before camp but considering the age of the group it’s a very good quality camp.”

As with anything in soccer or life, there are no guarantees. Robinson knows that the next generation of American players is strong and he will have to play well to remain with the team or even to build a case for the 2020 U-23 Olympic team – for which he is also eligible.

Even with the U.S. team’s failure to qualify for the World Cup, he notes that the vibe is quite positive as the prevailing sentiment among the players is to seize the opportunity at hand rather than dwell on the past.

“I was pretty prepared what it’d be like.” Robinson said. “Obviously there is a bit of negativity around but all the players know we have a young group at the minute and they all realize there is a chance to be taken and it has really given everyone a boost. If anything it has definitely more positive than I’ve been thinking. Everyone is more upbeat and they all know they have a chance.”

The United States will have six available substitutes against Paraguay and Sarachan said he plans on using all six. With 17 players likely to see the field, it is likely that multiple first caps will be awarded.

What will Robinson’s reaction be if he sees the field?

“Definitely, for the first minute,” he said with a laugh when asked if he’ll have butterflies. “But after that, I should be all right.”