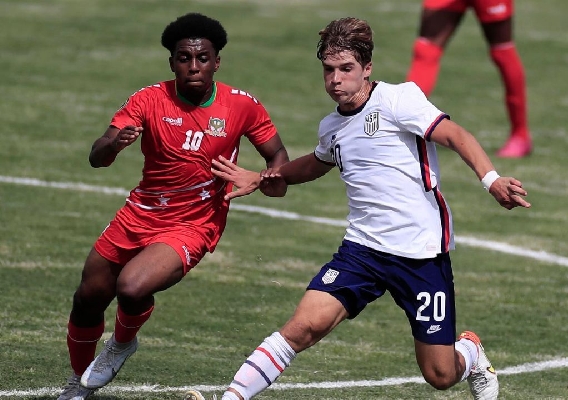 Rokas Pukstas has had a great 2022 with his promotion into Hadjuk Split's first team and being named to the U.S. U-20 roster for World Cup and Olympic qualifying. Now the Oklahoma native will be looking to qualify for both tournaments and perhaps follow in his family's Olympic legacy. ASN's Brian Sciaretta spoke with Pukstas from Honduras.
BY Brian Sciaretta Posted
June 24, 2022
11:00 AM

THE UNITED STATES U-20 national team is now entering the pivotal stage of the CONCACAF Championships that will serve as qualification for both the 2023 U-20 World Cup and the 2024 Olympics. It is a massively important tournament for the U.S. Soccer to secure participation for key American prospects in two global tournaments.

Rokas Pukstas, 17, is one of the team’s central midfielders and he has been part of the cycle since the start when the team participated in November’s Revelations Cup in Mexico just days after head coach Mikey Varas was hired. Since then he has watched the team grow while also making huge strides at his club, Hajduk Split in Croatia, where he made his first team debut in April.

For both club and country, it has been a huge year for Pukstas and these CONCACAF Championships are where he wants to see that progress translate into tangible results.

“When I was in November camp I was still training with the U-19s at Hajduk, barely with the first team,” Pukstas told American Soccer Now from Honduras. “Once I progressed to first team in January preseason and then I was full time since then, my comfort level got so much better, especially in these camps, I have more confidence. Definitely I see myself bringing the kind of that European style - the calmness, less frantic - into these camps. I see the progress in myself, but also our team. You can see the progress from the November camp, individually too. The individual success can also bring team success.” 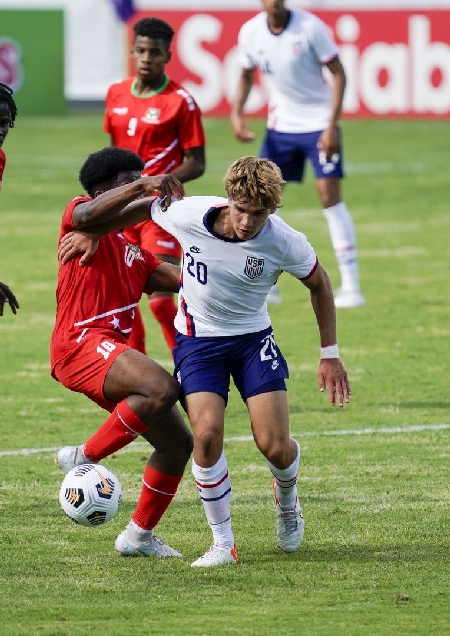 It has been quite a journey for Pukstas to get to this point and it differs from many other top American prospects. He did not come from a major U.S. metropolitan center with professional soccer academies nearby. He also did not come from a soccer family who was able to give him proper instructions at a high level.

Instead, Pukstas is from Stillwater, Oklahoma - where American football reigns supreme. His parents are both Lithuanian immigrants who participated in other sports at the highest levels. His father, Mindaugas Pukstas, even represented Lithuania at the 2004 Olympics in Greece for the marathon.

Getting pushed and getting high quality games was always a challenge for Pukstas once he discovered he had the talent and drive to go far.

“In Oklahoma, soccer is the fourth most popular sport there,” Pukstas said. “It all started with rec. I was from a small town. Once I competed there, once I develop, I need a place to move. So, I went to Oklahoma City to train. It's just different there because there's was no Development Academy. They had a lot of good players but they're just not pushed how they should be. It was better for me to go to Sporting KC rather than stay in Oklahoma. Dike, he went away to college. Oklahoma has the talent, but we lack the system.”

Like many top American kids, Pukstas had ambitions to play in Europe but there are always questions over where to being a career. Many players on the U.S. team have begun there careers domestically in MLS before heading abroad and for Pukstas, that was an option as he initially moved away to join the Sporting Kansas City academy.

We could even see our very own Rokas Pukstas of the @okenergy04boys leading his country on home soil! He recently captained the U-15 @ussoccer_ynt in Croatia!

But with his Lithuanian passport, he was able to go on trials at an earlier age and Hadjuk Split was the first place he trialed. In the end, it was the place he decided to sign his first pro deal. In April, he signed a new deal with the club through 2025.

“It was the next steppingstone from Oklahoma,” Pukstas said of Sporting KC. “Like always, it was a struggle at first, but I got comfortable and started executing. It was great. I learned a lot there. But I felt it was better to continue to go to Europe. But Sporting was great. It was a great steppingstone.”

“I went on trial in a couple of places and I looked into Hadjuk,” Pukstas added. “Hadjuk was actually the first spot I went, and I was hooked. I saw the pathway and it's been working great. Croatia is known for their really good development. I felt like my best option was to go there, learn the system, learn the best techniques for everything and grow from there.”

The past six months in 2022 have seen Pukstas take his game to another level. He’s now on the first team at Hajduk Spit and has ambitions of becoming a regular next season for one of Croatia’s biggest clubs. 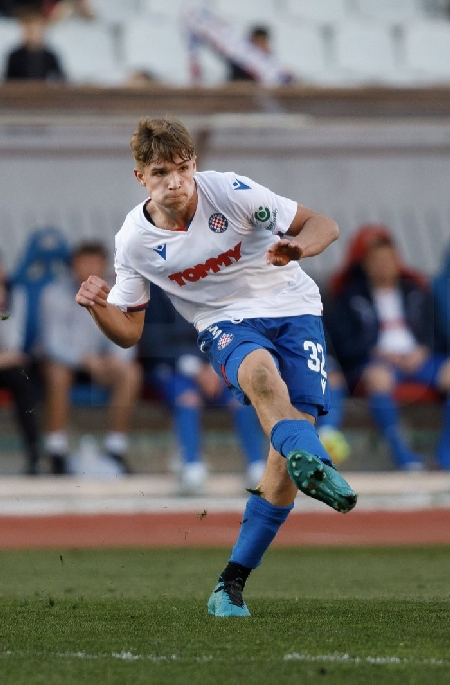 “I'm not going to lie, it was really tough for me at the beginning,” Pukstas said. “I was confused about the tactics.  I wasn't getting a lot of minutes. I was being pushed down and I was kind of the guy who was different. Most of the guys there were Croatian. But once you start performing, the teammates will accept you more and it just became better and better every day. But it was really, really tough in the beginning getting used to the culture, the food, everything's different there.”

He has also been growing in importance to Varas throughout the cycle this qualifying tournament has shown that as he was given the starting job for the group stage finale against Cuba where the U.S. team won 3-0 to secure a first-place finish in Group E. Due to the fact that the roster size is small and games taking place every two to three days, players have to get rotated into the starting XI frequently and are often asked to play multiple positions.

Rokas describes himself as a box-to-box midfielder who can play either the No. 6 or the No. 8. Stylistically, he says he enjoys being the “fireman of the group” who can defensively respond to situations when the opponents create a dangerous possession (“being there defensively, aggressive with tackles, covering a lot of ground, being that leader and to win the midfield battles and just controlling the tempo of the game”).

Now in Honduras, Pukstas is happy, but he knows the responsibilities of the tasks ahead. He enjoys the progress the U-20 team has made this cycle and hopes that it will be on full display in the knockout rounds where the opponents will be better and the intensity will be raised. 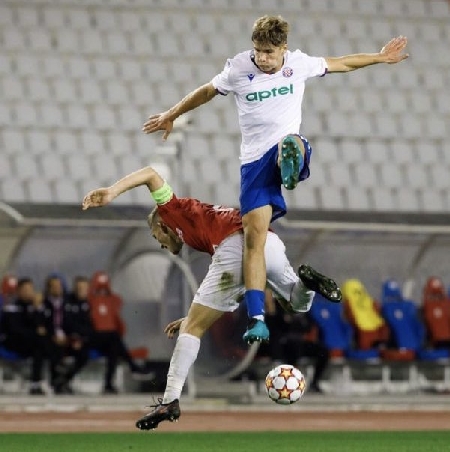 “The first two camps we would play intrasquad matches where we would all outplay the press pretty easily. But now once we learned the system, everybody's more disciplined. It is really hard to beat our press and trainings are more intense. It's hard to break everything. So once people got more disciplined, got more into the tactics, it has just been a lot smoother process. We feel confident… Everybody's been talking about the importance of qualifying but Mikey really does a good job of telling us the focus on the next game.”

There is a lot of pressure on this U-20 team to end U.S. Soccer’s skid of failing to qualify for the Olympics. For this to happen, the U.S. team will have to win its semifinal game in Honduras, quite possibly against the hosts.

The Olympics play a big part the Pukstas family given his family’s athletic history and his father’s participation in the 2004 Games. Even though it was a different sport, for a different country, coming from that background has helped Pukstas mentally adjust to the pressures of international sports. 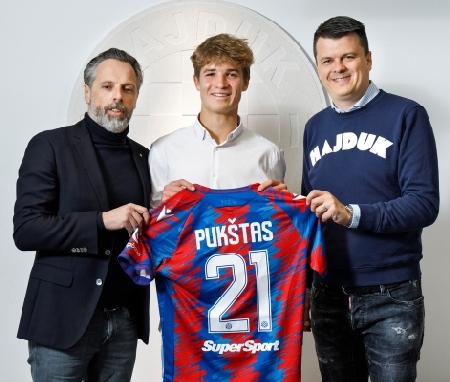 “It makes me really proud to show what my parents have done for their country also,” Pukstas said. “They've basically been through these processes. It's a different sport, but they know what could happen. They've been really helpful and to help me get through this because they went through it, too.”

Even though Pukstas is from a Lithuanian family, he looks forward to representing the United States (which has has represented since the U-15 level) and believes in the future of soccer in this country. Earlier this year, Lithuania’s soccer federation met with Pukstas to gauge interest and see if he would be interested in following in his father’s footsteps. Pukstas politely declined, however, with seeing the potential of the current younger generations of American players.

“My whole family is from Lithuania,” Pukstas said. “When I was from six to 10, I'd go every summer and stay with my grandparents and play for the academies there. Lithuania definitely has a place in my heart. But the future in the U.S. is great to see. I want to be part of that process. I want to help in that process for the U.S. to be good. Lithuania is in my culture but my whole family agrees that this is the best pathway for me.”