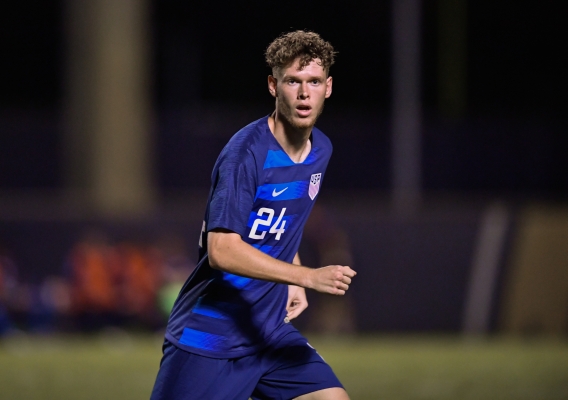 After a roller coaster 2019, Cappis eager to start 2020 strong with the USMNT

Christian Cappis is one of the more intriguing young players on the January camp roster and ASN's Brian Sciaretta spoke with the Hobro midfielder on what he learned in his eventful year in 2019 and what he sees ahead in 2020.
BY Brian Sciaretta Posted
January 07, 2020
7:00 AM
THERE ARE a lot of new faces in camp with the United States national team this month and everyone has an interesting path which has brought them into their first roster. A lot of players are coming off strong seasons or have shown well with U.S. youth national teams to the point where Gregg Berhalter wanted to see what they had to offer.

For Christian Cappis, 2019 was nothing short of what he calls a “roller coaster.” In what was essentially his first full seasons as first-team professional player, Cappis has been through a wave of ups and downs that have tested him beyond what many players his age experience.

Not even 12 months ago, he was simply hoping to break into Hobro’s roster – which he did and played a role in a successful Danish Superliga relegation battle. Then he was cut from the U.S. U-20 World Cup team. He then returned to Hobro and continued to start in the 2019/20 season in another relegation battle. But then on the international front, he impressed with the U-23 team and concluded 2019 with his first full U.S. national team call-up.

“I'm really excited the way things are going for me personally but I also know that to survive at the professional level, you have to get results,” Cappis told ASN. “That's the most important thing. And then obviously with the national teams, doing well and then not making the U-20 World Cup, but then doing well in Spain this last time with the U-23s and now going with the first team - it's gone by very quickly. Maybe in an up and down kind of way but I feel prepared for any opportunity that comes my way just because of the way things have been going at my club and how I've been playing there.”

But while it has been a mixture of ups and downs for Cappis, the benefit is that he’s learned an awful lot. The relegation battles and being cut from the U-20 team were difficult but they gave the Texas native experiences to draw upon as he has moved on with his career.

Heading into 2020, more challenges await. Another relegation battle looms, he could be the subject of transfer interest (which he admits he’s thought about but quickly points out he is focused on the Superliga season with Hobo and insists he still has a lot to learn), and there is also the possibility he anchors the U.S. U-23 midfield when it tries to qualify for its first Olympics in 12 years. To handle this busy year, the experiences of 2019 will help give him the maturity during this stretch.


In the Danish Superliga today, U.S U-23 eligible midfielder Christian Cappis, 20, was the MOTM in Hobro’s 1-1 draw vs Sonderjyske pic.twitter.com/FK2OA0i7PI

“I think if I look back to January or May or June of last season, I feel so different now,” Cappis explained. “I feel so much more mature in my game in the way I'm playing now - even compared to when I started playing at the start of this season. But in my whole life growing up and in youth academies it was a roller coaster, up and down, like this as well. It's something that I've dealt with growing up and now it is just transitioning it into the professional game. I feel very comfortable. I feel like I can handle these situations well, learn from them, move on, and get better.”

The nature of playing in the Danish Superliga has also helped Cappis quite a bit. Like many young American players, he actually was not very familiar with the league as a whole. He knew the bigger clubs in the league like FC Copenhagen, Brondby, and Midtjylland but he was unaware of the league's others clubs.

But what he found is that what the smaller teams in the league lack in terms of technical quality, they make up for in tactics, hard work, physicality, and an overall intense attention to detail.

“After being here for a year and a half now, I think that the level is much higher than a lot of people realize,” Cappis discussed. “Obviously, you have FC Copenhagen's, the Brondby's, the Midtjylland's that will play in the Champions League and Europa League. But as you go down, you start to lose a little bit of the technical ability but the top teams have, I think you find a whole different side of the game where it becomes very organized and it's very tactical.

“And for me, those are the hardest games I've probably ever played - not against the top teams but against the lower teams, because they are so focused on every little detail that they're not going to take a single moment off during the game and they are going to fight for every ball,” he continued. “The top teams are very, very good. But you don't hear a lot about the other teams, but the other teams, for me, are harder to play against sometimes.”

With either the U.S. U-23 team or the full national team, Cappis brings a combination of size and physicality to the midfield while also adding quality on the ball. He describes himself as a No. 8 who plays like a No. 6 defensively but can also move forward and create offensive chances from deeper positions.

And while he looks forward to showing Berhalter and his staff what he offers to the team during this camp, he admits that the first team call-up caught him by surprise as he was expecting his time to be with the U-23s. And while he is excited for this camp, he is still keeping an eye on Olympic qualifying in March.

“With where I was at, I kind of figured that I would be with the U-23s and move forward,” Cappis recalled of the U.S. call-up. “Gregg called me a few weeks ago and said that he wanted me to come with the first team and that I've done well. He wanted to see how I would do. It was obviously a dream come true. I couldn't be more excited about it.”

“With the U-23’s, obviously everybody's mindset is to qualify, that there's really no other option for us,” Cappis stressed. “That anything else would be a failure. And I think that we have a lot of very, very good players and there's a lot of competition for the U-23s. We recognize that we've missed the last two Olympics and we want to end that.”