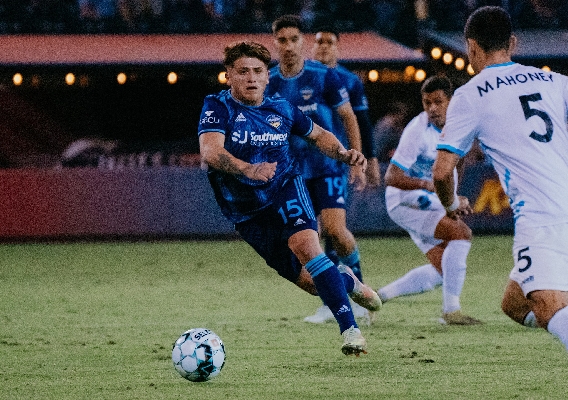 After a breakout with El Paso and playing with the U.S. U-20s, Luna optimistic for 2022

Diego Luna has been one of the more surprising players on the U.S. U-20 team, but after a breakout in the USL Championship in 2021, the Sunnyvale native is hoping it leads to bigger things for both club and country in 2022. ASN Brian Sciaretta spoke with the playmaker at the most recent U.S. U-20 camp.
BY Brian Sciaretta Posted
February 16, 2022
9:05 AM

THE UNITED STATES U-20 national team is at an important point. The team recently completed its second camp of the cycle and now players are returning to their clubs to build cases that they need to be in the mix for future camps. This summer the team will take part in a dual qualification tournament for both the 2023 U-20 World Cup and the 2024 Olympics with likely only one full camp remaining before final preparations for that tournament begin.

Diego Luna, 18, has been one of the players who has featured the team’s first two camps. Playing for El Paso Locomotive in the USL, Luna has played his preferred No. 10 position for the U.S. U-20 team and has been impressed with the team’s growth – which he was quick to point out started completely from scratch.

“We haven't been together in two years, and there are guys who have never played with each other, guys that they didn't know each other's first names, who are coming in from all over the place,” Luna said. “It's difficult, especially having such a short amount of time just to play games in camps. I'm very proud of the team and I'm very proud of what the coaching staff and technical staff and support staff has done. We've created bonds here already that are very strong on the field... And with a couple more training with a couple more weeks together, we'll be where we want to be.”

The U.S. U-20 team is now under the direction of head coach Mikey Varas who was hired days before the team’s first camp in November for the Revelation’s Cup. Luna likes the approach of Varas, who he says wants the team to develop into a very attack-minded group. He wants to build out of the back, break plays, accelerate into the final third, and press.

But the team is also still very much a work in progress. A big priority of the past camp was shoring up the defense which conceded seven goals over three games at the Revelations Cup. This past camp, the team did not concede a goal going against the New York Red Bulls and FC Dallas who were playing preseason friendlies. After a 0-0 draw with the Red Bulls, the team fought for a 1-0 win over FC Dallas with the goal coming against the run of play.

Think that Diego Luna has become the best young American player that most of you aren’t watching. Very talented multi-faceted attacker, formerly at the Barcelona Residency (Araujo, Clark, Hoppe).

7g/4a in 24 games for El Paso, and turned 18 in September. pic.twitter.com/3MJHVpHOjD

Now moving forward, the team will hopefully look to build up its attack. The next camp is scheduled for March with aim for it to take place internationally – with Argentina being listed as a likely destination. But the results over the recent camp help build momentum for the team.

“Coming into the game, we knew what the Red Bulls was about - a very aggressive and very fast and high press team,” Luna explained. “We came into that game strong, and it was our fourth game of being a group. We kept a 0-0 tie. We had many chances that we could have put away. We just needed to be clinical in the final third. It was a good testing point against men. Against FC Dallas, that was another story. Dallas played very well. They were more of a possession-based team and it put us against a totally different opposition. I think we defended well and we created chances for ourselves. At the end of the day, we got the victory and played well.”

Luna has an interesting path that brought him to this point. Born in Sunnyvale, California, Luna is the son of a mother and father who are both Mexican immigrants. He is the youngest of four children, but the next closest sibling to him in age is his sister who is nearly 10 years his senior. Soccer was big in his family and his father and brother were his coaches until he was 12.

May your final thoughts tonight be of this late goal by @LuchoSoli and Diego Luna!

Growing up, Luna said he realized he wasn’t great at school and instead wanted to follow his dream of soccer. Initially with the San Jose Earthquakes academy, Luna was not happy with his development there so he had to make a big decision as to where to go next.

“I was stuck,” Luna recalled. “I made a move that moved away from my family and went out to Arizona at the age of 15 and moving away from families for your dream - that's a big thing… I think that was probably the best decision of my life. Heading out to Arizona for a year and a half got me to El Paso. And then, of course, my family supported me 100 percent.”

At El Paso, Luna has thrived. In the 2021 season, he played in 31 games and notched nine goals while adding five assists. He played a big role in helping the team qualify for the post season of the USL Championship.

Diego Luna puts El Paso Locomotive FC on the board first. Luna scoring in the 29th minute, his fifth goal of the season. #KTSM9Sports pic.twitter.com/CBysWkxRWK

Heading into 2022, Luna wants to move onto a bigger platform and hopes that his performances with the U.S. U-20’s and El Paso open doors – MLS or elsewhere as teams both domestically and abroad have been monitoring his progress. For now, he remains happy with El Paso and insists it has been a great place for him to start his career and prepare him for a long professional career.

“Everybody looks at the USL., they think it's maybe not a good,” Luna explained. “I have everything going against me. People to see that I am performing well in the USL. The one thing they say is, OK, can you do that in that in that next level? That's the challenge for me. That's the reality of it. But the USL is an amazing place to grow as a player in the U.S.. It is where you start to get professional minutes and you become a pro. You get to play against veterans, guys who know the game, guys who are physically superior. It's a great place to develop and see where you're at and see if you're ready for the next step.”

Luna indeed looks ready for the next step and he is happy with the development of his game over the past year. One of the high points for him came in November at the Revelations Cup when he earned the start for the U.S. U-20 team against Mexico. Shortly into the second half with the U.S. trailing, Luna scored an equalizing goal. While the U.S. team lost 2-1, it was a decent performance against a strong Mexican team that won the tournament over Brazil, Colombia, and the U.S.

Cade Cowell to Diego Luna to equalize the U.S U-20s vs Mexico at the Revelations Cup pic.twitter.com/lSfBVEhJQ3

That moment was personal for Luna given his connection to Mexico and the way he identified himself in the fierce rivalry the U.S. and Mexico have in the sport. His family was divided when the national teams played and while Luna was always in the U.S. corner, it helped him become closer with his Mexican heritage.

The goal, however, unified his family in their desire to see him succeed. 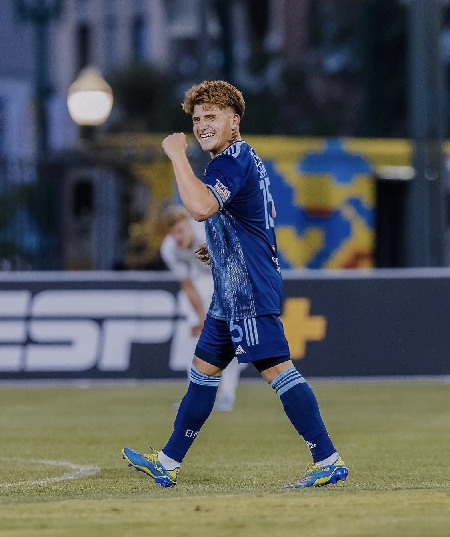 “Then as I grew older, I started to realize I am Mexican, I speak Spanish, my parents are from Mexico. I started to put it into perspective -  I have respect and I love Mexico and I love being Mexican, but I grew up in the United States. I think that's something that you need to be proud of. Ever since I was born here in the US, I was raised here. It gave me what I have now. It got me to where I'm at now. And I think that's a big thing you need to take into perspective - I was born and raised in the United States, so it's only right to play for the country that they raised me to who I am.”

The past year has been huge for Luna on a personal and professional level – but with his club and with his country. But with the U.S. U-20 team gaining steam in its cycle and bigger clubs lurking, the next few months could be even bigger for him.