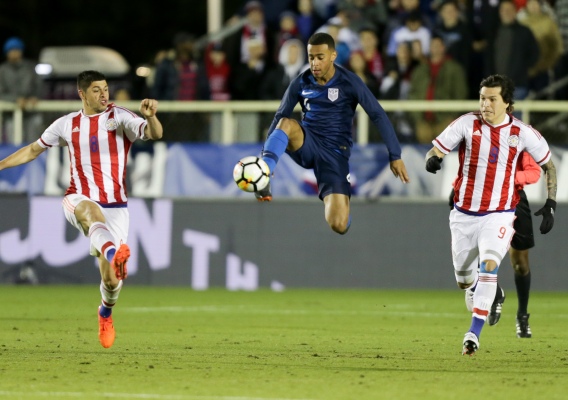 Tyler Adams was the deserved Man of the Match in the U.S. team's win over Paraguay. For those who have watched him with the U.S. U-20 team and the Red Bulls, this isn't surprising. But after last night, the Wappinger, N.Y native is aiming for a big role with the U.S. team moving forward.
BY Blake Thomsen Posted
March 28, 2018
6:30 AM
Cary, N.C. - As halftime neared in the U.S.’s 1-0 win over Paraguay last night, the U.S. was struggling to break down a resolute Paraguay team. The South Americans’ high line was making it difficult for the U.S. to generate consistent scoring chances, and it looked like the Yanks were heading toward another frustrating, scoreless half. In the 43rd minute, Tyler Adams decided to do something about it.

He received the ball from Wil Trapp with his back to goal on the edge of his own defensive third and played a first-time pass to Marky Delgado. He was in, ostensibly, a completely unthreatening position.

But Adams is no ordinary center midfielder. After playing the pass to Delgado, he turned and started running vertically up the field. He started slowly, lulling Paraguay to sleep.

Delgado saw what was developing much sooner than Paraguay did. As soon as Delgado played his defense-splitting pass, Adams took off.

Adams hit top gear seemingly instantly, leaving the Paraguayan defense in his wake. It was a remarkable sight to behold.

Just seven seconds after he played his pass to Delgado deep in his own half, Adams was one-on-one with Paraguayan goalkeeper Roberto Fernandez.

“I was gonna try to tuck it back post,” Adams said after the match, “but I saw the keeper take a good angle. I thought if I drag it [around the goalie], there’s no way he gets the ball. He got me instead.”

The referee pointed to the penalty spot, and Bobby Wood stepped up to score the game’s only goal.

For many who are familiar with Adams, they will note that he made a similar run against Club Tijuana in the second leg of the CONCACAF Champions League quarterfinal- which he converted as the Red Bulls routed the Liga MX team 5-1 over two legs. Adams was asked if that sort of run could become something of a signature play for him.  He did not hesitate with his response.

“Absolutely,” he said, “especially against guys who want to play high backlines against us. When Weston [McKennie] is in there, Christian [Pulisic], Kellyn Acosta, they recognize these kinds of balls. We know our strengths, and if we just get one of those right, we can create a chance and are able to score. It’s just about getting the chemistry right.”

The penalty-drawing run was just one part of a man of the match performance from Adams, who never stopped running throughout the 90 minutes.

“Tyler has an incredible engine,” interim coach Dave Sarachan said after the game.

It’s easy to get excited about what is to come for Adams in a U.S. shirt. He’s only 19 years old, but he looked like the best player on the field from the opening minute.

His game is certainly not perfect. There were a few loose touches and a few passes that were not as crisp as they needed to be. But overall Adams looked like a player who can be a national team fixture for years to come.

Now the question becomes where to play him.

Adams has proven to be very versatile at the club level. He spent some time at wingback for the Red Bulls last year, and he has played primarily as a defensive midfielder for his club this time around, helping lead the Red Bulls into the semifinals of the CONCACAF Champions League.

Last night, he played as more of a box-to-box No. 8, shielding the backline along with Trapp but also surging forward when necessary.

Adams himself isn’t too picky, so long as he’s not out wide.

“6 or 8,” Adams said when asked where he preferred to play. “Either one. I can sit and facilitate the play or I can make those runs out of midfield and be dangerous.”

Either way, Adams is growing more and more comfortable with the USMNT with each passing day.

“I feel comfortable here,” he said. “Gaining that confidence throughout the week is important. But these guys are easy to play with. It was easy for me [to adjust to the national team level]. I feel like I fit right in.”