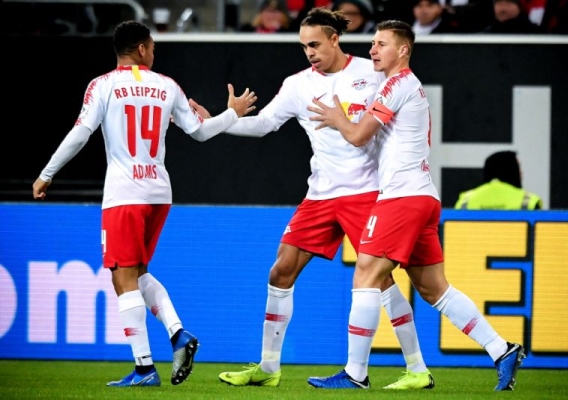 Many of the top Americans abroad were not in action over the weekend but there were a few standouts - including Tyler Adams and Duane Holmes, yet again. Brian Sciaretta breaks it down.
BY Brian Sciaretta Posted
January 28, 2019
4:10 AM
THE WEEKEND for Americans abroad wasn’t that busy but the highpoints provided some great moments, most notably the Bundesliga debut for Tyler Adams.

The truth is that many of the top U.S. internationals were not in action. Weston McKennie had to serve a suspension. Matt Miazga was not in action for his new club, Reading. Christian Pulisic was an unused substitute for Borussia Dortmund in its win over Hannover. Bobby Wood didn’t even dress for Hannover after a poor outing last weekend. DeAndre Yedlin did not play for Newcastle in the FA Cup.

So, naturally it was going to be a slower weekend regarding the news from Americans abroad. But there were some obvious exceptions.


Tyler Adams, 19, went as an unused sub during RB Leipzig’s first game after the winter break – a 1-0 loss to leaders Borussia Dortmund. But Adams made his club and Bundesliga debut on Sunday when he earned the start for Leipzig away at Fortuna Dusseldorf (who started American midfielder Alfredo Morales).

The bottom line is that Adams looked terrific. He looked as if he had played at the club for years and he was doing all the same things he had been doing at the New York Red Bulls. He was a disruptive force and he was also effective with his passing. He was a major asset in his team’s 4-0 win.

It’s a full credit to the New York Red Bulls who prepared Adams to the point where he could make an effective transition to a top-tier Bundesliga team (currently in fourth place).

But it also stresses the value of moving to a club that plays a familiar style with similar roles. The Red Bulls have built a style which has matched all of the other clubs the Red Bull organization has owned. What is even better is that New York, Salzburg, Leipzig, and even down to Red Bull II in USL are not just feeder clubs to each other, but all of them are winning.

Adams is an example of a perfect combination of a player who is talented as well as smart and mature beyond his years. Then you combine that with a professional organization that has believed in him from an early age and who has connections that extended from his local roots with the New York Red Bulls Academy all the way to the top tier of the Bundesliga.

Adams had a lot going for him and he is taking full advantage.


Duane Holmes, 24, is simply on fire right now for Derby County. Last weekend he was the Man of the Match as Derby beat Reading to remain in the promotional race in the Championship.

On Saturday, Holmes set up Derby’s goal in a 1-0 away win the FA Cup over League One’s Accrington Stanley.

The resume continues to be bolstered every weekend as he seeks his first USMNT call-up in March.


Here is the winning assist from American attacker Duane Holmes today in the FA Cup pic.twitter.com/8EILkLmfgN

Carter-Vickers starts in the FA Cup

One player who needs playing time badly is Cameron Carter-Vickers who has done well on previous Championship loans but who has seen his playing time hard to come by this year at Swansea City. On Saturday, Carter-Vickers earned an FA Cup start for Swansea which defeated Gillingham 4-1.

Carter-Vickers, 21, needs regular minutes in order to find a high-level club where he can start. On contract with Tottenham, Carter-Vickers shows why the career path of signing for a big club and then drifting from loan to loan has its risks. He can’t settle roots and grow at club to the point where he can blossom. He is always going through new situations which require adjustment phases and eventually he ends up at a club where he doesn’t click with the manager. Then he loses a year in his development.

But the best thing for Carter-Vickers is to make the most of his chances the rest of this year and eventually hope for a full transfer to a club that rates him highly.

Also over the weekend, Tim Weah earned his first start for Celtic after scoring in his first two appearances off the bench. The dream start to his loan from Paris St. Germain did not continue as Weah was subbed off for Celtic in the 63rd minute of a 3-0 win over Hamilton Acidemical (it was 1-0 when Weah came off).

Weah had his moments but it clearly a learning experience to start as opposed to come off the bench and run at tired defenders when the result was not in doubt. Overall, Weah wasn’t part of many scoring chances and wasn’t as involved as his first two appearances but the fact he started was encouraging and he will get plenty of more chances the remainder of the season.

In other news regarding players eligible for the U.S. U-20 team, Josh Sargent came off the bench and played 20 minutes for Werder Bremen in a 2-2 draw at home against Eintracht Frankfurt. Like Weah, Sargent was decent although wasn't quite as effective as recent games. Still, these types of games remain critical for his development and growth as a player.