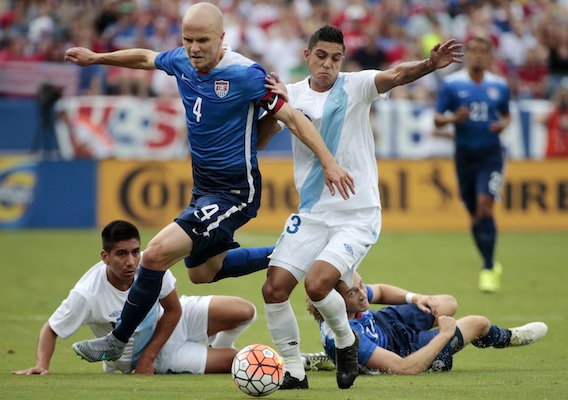 A Six-Pack of Insights About Friday's 4-0 U.S. Victory

When is a 4-0 win a disappointment? When the other team misses two freebies and scores an own goal, and when your guys look disorganized and sluggish for the first 60 minutes of the contest.
BY Brian Sciaretta Posted
July 04, 2015
7:30 AM

WHILE THE U.S. WOMEN PREPARE for Sunday night's World Cup final, the men's national team defeated Guatemala on Friday night in Nashville, 4-0, in a match that showcased plenty of positives and nearly as many negatives. Here is what I took away from the game

1. Will the real Chandler please stand up?

Timothy Chandler has drifted in and out of the U.S. national team since 2011 and his best performance for the Stars and Stripes came in his debut against Argentina in March 2011. Against Guatemala, we saw the best and the worst of Chandler. In the first half he was a defensive liability, conceding open headers and getting caught out of position.

In the second half Chandler transformed into a true offensive weapon. It wasn’t just his golazo either. He made great runs and combined with midfielders to break down Guatemala’s attack. So the question is whether he can put it all together or is this just the norm with Chandler? If he can get his defensive responsibilities squared away, the right back position is likely his for a long, long time. The problem, however, is consistency. The good news is that he has never looked as motivated for the U.S. team as he did on Friday.

In recent national team games, Kyle Beckerman and Michael Bradley have partnered well in the center of the midfield. The two have played so well that 2014 World Cup star Jermaine Jones, currently out with an injury, has not been missed. Beckerman is a player who is most comfortable playing in front of the backline, is not afraid to do dirty work, loves to play defense, and completes an astronomically high percentage of his passes.

Beckerman brings out the best in Bradley because Bradley always knows were Beckerman is on the field (you get the sense this is not the case when Jones plays) and he knows Beckerman will get the ball quickly back into the attack. As a result, Bradley does not have to cover as much ground and can focus on a clearly defined role in a more attacking position.

Against Guatemala, Mix Diskerud was given an opportunity to play Beckerman’s role and there were early signs it just wasn't going to work. Early in the game Bradley was dropping very deep into the midfield to get the ball—which is not what he should be doing if the team wants to play in a diamond formation. Overall, there was a lack of understanding between the two players and it took a while for Bradley find his way into the game.

When Morales came into the game, Bradley's game instantly got better, likely because Morales played a very Beckerman-like role.

After a successful January camp, Gyasi Zardes struggled in the March friendlies but Klinsmann stuck with him. Smart move, Klinsi. The California native has been making significant strides with his game and had two good performances recently against the Netherlands and Germany.

When Zardes came into the Guatemala game at the start of the second half, he was immediately dangerous. While his best position is arguably as a forward, he was very effective on the wing, cutting in to the middle of the pitch to sniff out goal-scoring chances. Zardesset up Altidore for a golden chance in the 57th minute and his assist to Chris Wondolowski in the 86th minute took a very high degree of skill.

With Graham Zusi having a poor game and Bedoya not yet full fit (per Klinsmann’s post game comments), Zardes could be in line for a lot of minutes in the Gold Cup.

The Toronto FC forward was clearly not at his best against Guatemala. Altidore looked frustrated and rusty and demoralized.

One potential reason is that he has only recently returned from missing a month due to a hamstring injury. That is what U.S. fans should be hoping for, anyway. What would be a bad sign for the team is that Altidore is hitting a dry spell where he lacks confidence and doesn’t produce. His career has always been one been of extreme peaks and valleys. It is too early to tell if this was just a bad game, but his body language was a slight concern.

5. Yedlin is a nightmare to defend

The game against Guatemala was the second time Yedlin started on the wings for the U.S. team and he used his speed to his advantage.

He was involved in the team’s first two goals and was frequently able to get into a dangerous position to create scoring opportunities. While he is still young and raw, he is going to be able to pick apart the defenses of CONCACAF teams at the Gold Cup and should be a huge asset if any opponent wants—or needs— to open the game up.

6. The performance was inadequate

The scoreline suggested dominance but in reality a lot of luck contributed to the lopsided result. There is a good reason why Jurgen Klinsmann was not happy with the U.S. showing Friday night.

Guatemala’s Jose Contreras missed two chances that any decent forward will almost always finish. The U.S. also scored off an egregious own-goal that, despite the nice cross from DeAndre Yedlin, can’t be considered anything other than a fluke. In other words, against a slightly better opponent this was a close game despite the significant talent gap between the two sides.

The defense was solid for the most part but occasional concentration lapses nearly cost the team. While the team’s streak of conceding late goals is now well in the past, the problem is that there are still too many mistakes being made across the defense.

Guatemala did not punish the U.S. team for its mistakes but maybe it would have been the best thing for Klinsmann’s squad if Guatemala did take advantage to serve as a wake-up call. Friendlies are about preparing and the last thing the team needs to believe that this performance will work in a tournament where stronger teams await.