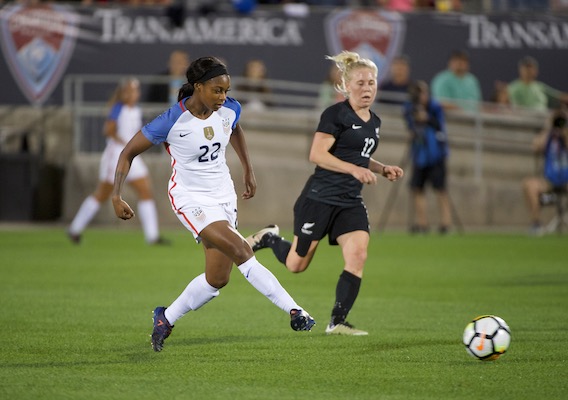 The former UCLA star was overlooked in the 2016 NWSL draft but has responded well to the slight. The 23-year-old shifted from forward to fullback and is now settling in with the U.S. women's national team.
BY John Halloran Posted
September 18, 2017
8:00 AM

GIVEN HER RESUME—she was a two-time All Pac 12 selection at UCLA and represented the United States at the international level as part of the U-17s, U-18s, U-20s, and U-23s—Taylor Smith entered the 2016 National Women’s Soccer League draft fully expecting to be selected.

After all four rounds of picks from the league’s 10 teams, however, Smith's name was not called.

"It wasn't part of my career success plan,” she told American Soccer Now. “I never pictured that. At the time, it was heartbreaking and it seemed like I wouldn't have a future in soccer.”

Despite her college accolades, including helping UCLA to a national title as a freshman in 2013, Smith struggled during her senior year, managing just two goals over 14 appearances. After the draft, a number of teams came calling—asking Smith to come to their tryouts that spring—but following her draft day disappointment, the Texas native wasn't sure about her next step.

Eventually, Smith, 23, accepted an offer from the Western New York Flash. The team had struggled the previous two seasons and few expected much more from them in 2016. Smith chose Western New York in part because she already knew many of the players on the team.

Smith said she, “needed to fall in love with the game again,” and with the Flash, she found the perfect environment.

In her rookie campaign Smith made 20 appearances, many of them as a substitute, and the Flash surprised everyone by winning the 2016 NWSL title.

Then, in the off-season, another surprise: United States women’s national team head coach Jill Ellis called Smith and invited her to a January training camp.

Smith did well enough there to stay on Ellis’ radar and earn another call-up in July for the Tournament of Nations. During that competition Smith earned her first cap, notched two assists against Japan, and earned minutes in all three contests.

After the match against Japan, Smith credited Ellis for her growth during the tournament.

“[Ellis] said, ‘Go out there and be confident. Just embrace this whole process. It’s not going to be easy—it’s a rollercoaster. You’ve been doing great and have confidence in that, just to go forward and be an attacking outside back,'” explained Smith.

All three appearances for the U.S. this summer came at outside back—the same position Smith's club coach, Paul Riley, nudged her toward during her rookie campaign in New York. At first, Smith didn’t take well to the change.

"I've always been a forward,” she said. “When Paul wanted to try me at outside back, I was a little bit hesitant because we're playing at such a high level and for me not to know the position and have no actual experience—that was very nerve-wracking for me.”

Although Smith was “shocked” by the national team call-up in January, it changed her attitude.

“It was a real confidence booster,” she explained. “My mentality completely changed after that. I got back to [the team] and worked super hard. Paul helped me learn this new position and I trained really hard.”

The Flash also made a change during this window—moving from Rochester, N.Y., to Cary, N.C., and rebranding itself the North Carolina Courage. Smith had a new team, a new position, and a new outlook on the game.

With the help of her teammates and the coaching staff, Smith began to learn the ins and outs of playing fullback, and so far in 2017 it has paid big dividends. The Courage boast the best defense in the NWSL and sit atop the league standings with two weeks left in the regular season.

Now back with the national team for two friendlies against New Zealand, Smith is looking to continue her success. She started the first match on Friday evening in Colorado and the teams play again on Tuesday in Cincinnati (7:30pm ET, FS1).

Despite now embracing her role as a full-time defender, Smith hasn’t forgotten her attacking roots. Ellis calls her a “60-40” defender, saying that she spends 60 percent of her time attacking and the rest defending.

Smith admitted that she’s still discovering the nuances of her new position—including learning that she can’t take plays off as she could sometimes get away with when playing as an attacker.

“I figure the more I attack the less I have to defend,” she added. “The U.S. is about being a high-pressing, attacking team. I love that style of play."

It’s been a crazy 18 months for Smith, going from undrafted rookie to an emerging mainstay in the U.S. lineup. Looking back, she calls her experience in early 2016 a “bump in the road” that has made her the player she is today.

"I never would have thought this would have been my career path. If you would have talked to me a year-and-a-half ago, I never would have dreamed or imagined this. For me, it just shows if you do the right thing, everything will start to fall into place. It was a hard experience to go through, but I look back on it and I appreciate it and now I think I'm even better."