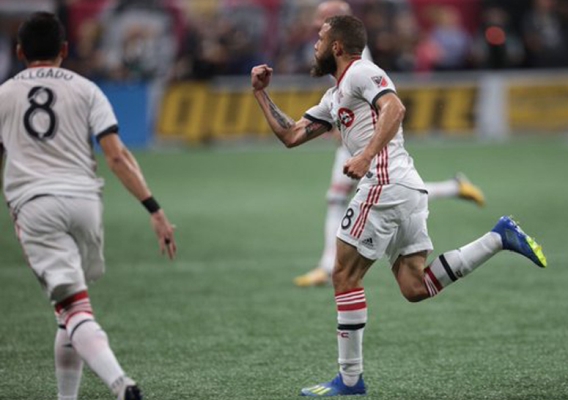 It didn't match the excitement of the Western Conference Final but it was just as effective and for the third time in four years, Toronto is in MLS Cup. ASN's Brian Sciaretta looks at the 2-1 win over Atlanta.
BY Brian Sciaretta Posted
October 31, 2019
6:00 AM
A DAY AFTER the Western Conference final was decided in a great game of soccer, Toronto claimed the Eastern Conference final in far less entertaining fashion. It was a game that was a slog for long stretches but in the end, Toronto prevailed in the Eastern final for the third time in four years.

Toronto had a brutal start to this game. It conceded an early goal thanks to a great run from Pity Martinez (who was kept onside by Michael Bradley) who then fed Julian Gressel for an easy goal. Then minutes later, Bradley conceded a penalty in taking down Martinez but Josef Martinez’s shot was saved by Quintin Westberg.

Crucial penalty save in the 11th minute. If Martínez had scored to make it 2-0, Atlanta probably would've cruised to easy win. Instead, #TFC stayed in it and equalized 3 minutes later, before going on to win 2-1.#ATLvTOR #TFCLive ???? pic.twitter.com/UHoHPWhz4B

In the 14th minute Nicolas Benezet put Toronto in front with the best goal of the night. On the left side Benezet was well defended but he was able to get just enough space to send a swirling low and bouncing shot past Brad Guzan on the far post.

The middle section of the game was largely uneventful with Atlanta holding a lot of the possession and shots.

It wasn’t until the 78th minute when Toronto moved in front due to a goal mostly against the run of play. Nick DeLeon scored his fifth career playoff goal with a great strike from distance that beat Brad Guzan to the top corner.

For the last 12 minutes, Toronto was able to defend well and preserve the upset win to make yet another return to MLS Cup.


The path for Toronto to MLS Cup has been brutal. It took 120 minutes to beat DC at home. After a late DC United equalizer, Toronto turned on the afterburners and roasted DC for a 5-1 win.

Then it beat the regular season Eastern Conference champs New York City on the road in another gritty and ugly game where the opponent made mistakes and Toronto was there to respond.

Finally, it took down Atlanta in Atlanta once again where it made fewer mistakes than its opponent and was able to not get dragged down by its own mistakes.

Beating the two best teams in the East on the road is no small feat. But what is clear is that in each of these three games, the opponents all had times when it had the momentum. Toronto was able to handle that and not let the game get away from them. Part of that is experience, part of that is coaching.

Transitional play made the difference


Coming into this game, Atlanta struggled with transition all season. Toronto came in with a plan to exploit this weakness by being disciplined enough to have an approach where it absorbed pressure and ran counter attacks into those spaces.

If you watch the winning goal, you will once again see Atlanta struggle. The hurried back and hand sufficient numbers to defend. But there was a complete breakdown where the players lost responsibility of their assignments (which Julian Gressel hustle back into the play but seemingly give up trying to track DeLeon).


Great goal from DeLeon but how did Atlanta not put pressure on him before the shot? pic.twitter.com/zqJynoJnvb

The result was a great strike from DeLeon that was made possible by Atlanta giving him too much space.


The third MLS Cup final between Seattle and Toronto is set. So, what to make of it?

It’s going to be asking a lot for Toronto to topple another top team on the road in one-off final. CenturyLink Field will be rocking for this game. And Seattle is coming in off a stellar performance against LAFC.

Seattle is the favorite and deservedly so but Toronto has faced tougher games and emerged victorious. Both teams are smart and well coached but Seattle has the ability to be explosive in transition but also defensively smart. If it can contain Carlos Vela for a game, it can hold off Pozuelo or Altidore.

But it’s too tough to predict right now.

In a playoffs that has been excited and filled with poor defense, the final consists of two teams that have made the fewest mistakes and have been able to win on the road. So all bets are off.