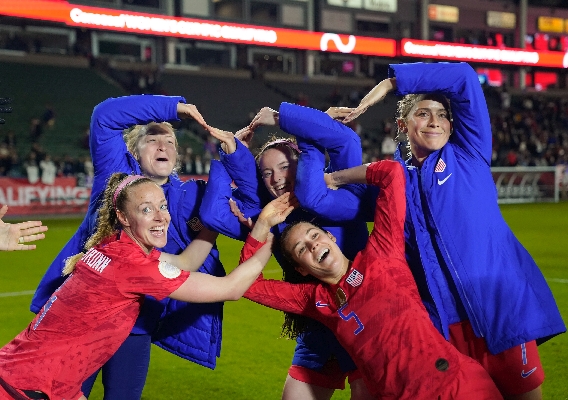 The United States women's national team is through to the Tokyo Olympics after a convincing 4-0 win over Mexico. ASN's John Halloran is here with his thoughts on the team's latest triumph.
BY John Halloran Posted
February 08, 2020
3:00 AM

THE UNITED STATES women’s national team is heading to the 2020 Olympic Games. On the back of a 4-0 win over Mexico, the Americans secured qualification on Friday night in Carson, California.

The U.S., as it has all tournament, got off to a quick start in the match with Rose Lavelle tallying in the fifth minute and Sam Mewis adding another only nine minutes later. In the second half, Mewis added a third on a lasered free kick and Christen Press scored on a chip to produce the final result.

For the first time in his tenure, head coach Vlatko Andonovski faced a must-win game and revealed his first-choice lineup. Other than Carli Lloyd replacing Alex Morgan at center forward, it was the exact same lineup that former head coach Jill Ellis used seven months ago in the 2019 World Cup final.

However, as the U.S. has worked its way through the qualifying process, it does appear that at least one change to that lineup needs to be made—Christen Press needs to be starting.

Press has been indomitable throughout the entire tournament, tallying five goals through four games, including some spectacular strikes. And she did so again on Friday, scoring only five minutes after entering the match and recording the only goal of the night by any American player on the front line.

None of the other U.S. forwards have looked as sharp as Press over the past two weeks and, on Friday, all of the team’s front-line starters struggled to make an impact.

It’s certainly not going to be an easy decision for Andonovski—to bench Lloyd, Rapinoe, or Heath—but based on form, there’s no legitimate argument for keeping Press out of the starting XI any longer.

Many have written about the impact of Julie Ertz on the U.S. team since 2017, when she moved into the No. 6 position and jump started a return to form after a long period of shaky results. In that role, Ertz became the team’s destroyer, helped shore up the backline, and released the Americans’ outside backs and wingers to attack with abandon.

However, what has been less obvious over the past year is Ertz’ continued improvement in the position. While she has always been an exceptional ball winner and competitor, she has now also developed into a quality distributor—both with her ability to recycle possession and find entry passes into the forwards.

Ertz has also become much more adept at playing with her back to pressure and finding outlet passes to relieve that pressure, especially against teams that have tried to stifle the Americans’ attack by closely marking her.

It’s gone largely unnoticed, but it’s been a vital part of the team’s continued improvement.

With the U.S. dominating the competition throughout this tournament, not much attention has been paid to the squad’s defense. But Crystal Dunn quietly hit 100 caps on Friday, a testament to her versatility.

The Crystal Dunn turning-point story is always the one about being the last player cut from the 2015 World Cup team, and it's generally been told enough, but to see her at 100 caps less than five years after that is remarkable. https://t.co/BcFUceHE7R

As arguably the best No. 10 in the National Women’s Soccer League, the vast majority of Dunn’s caps over the past two years have come at left back—including at last summer’s World Cup—easily making her the most adaptable player in the entire U.S. pool.