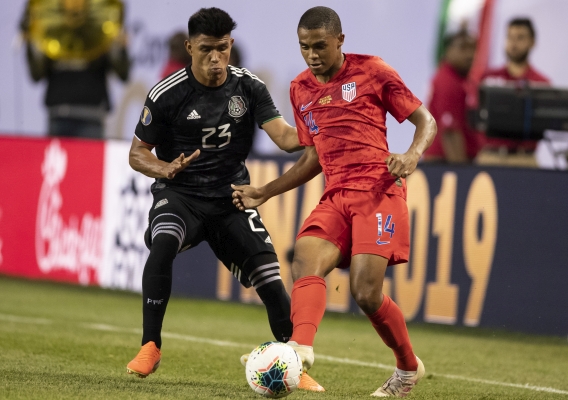 A look at Cannon's deal, struggles for Dest & Sargent, Marsch to Cup final, U-23 outlook, & more

The midweek gave us a lot to talk about and ASN's Brian Sciaretta looks at it all. Reggie Cannon's surprising new deal, struggles for Dest and Sargent, Novakovich's outlook, Jesse Marsch leading Red Bull Salzburg to the Austrian Cup final, and the U.S. U-23 outlook
BY Brian Sciaretta Posted
March 05, 2020
5:05 PM

THE MIDWEEK brought us some interesting games and storylines to follow as U.S. national team player earned a very important contract and several Americans players in Europe were involved in important cup games.

But, on the other hand, a lot of key national team players are not playing well for teams that are struggling. Josh Sargent and Sergino Dest saw their struggles continue. But they are not a lot either. DeAndre Yedlin and Weston McKennie are also not in great situations. That doesn’t even cover the numerous players who are injured.

Here are some thoughts on what the midweek gave us.

United States national team right back Reggie Cannon signed a new deal with FC Dallas today that will run though 2023 with a club option for another year. It is a financially lucrative deal that will increase his pay.

It is a deal that protects both Cannon, 22, and FC Dallas as interest in Cannon will surely increase the more he plays for the United States and the better he does for his club. Cannon has been a regular with the U.S. national team the past year and he will likely be a key player for the U.S. U-23 team.

While the deal runs through 2023, the likelihood that Cannon stays much longer is small. A move to Europe could happen soon – possibly by this summer if the offer is right. But this deal protects Dallas so that Cannon cannot walk for free anytime soon and it protects Cannon so that he is paid fairly should it take longer to achieve a transfer.

As Yahoo reported, Cannon has a buyout provision – which is extremely rare in MLS but also a sign of teams moving towards joining the global market.

If MLS teams, Dallas in particular, want to adopt a model that is open to selling, then tying up players before a transfer will probably become more normal. But the proof will be once it materializes.

The good news is that Dallas likely understands this with the amount of young players they sign and play. There is another link in the chain: develop, play, win, sell, repeat. All of those are important in the cycle.

Ajax and Dest continue to fade

It has been a remarkably difficult past three weeks for United States national team right back Sergino Dest and Ajax.

On Wednesday, Ajax lost to Utrech 2-0 and as a result were eliminated from the Dutch Cup.

Last week, Ajax lost to Getafe over two legs and were eliminated from the Europa League.

Over the past two weeks, Ajax has lost consecutive Eredivisie games, including a 1-0 decision to second place AZ Alkmaaer, and its lead atop the table is now down to goal differential.

Like many on the team, Dest hasn’t played well. The run the team had last year has now hit a wall. Now the team will have to find a way to fight through the adversity to win the Eredivisie.

In the German Cup, Eintracht Frankfurt easily got past Werder Bremen 2-0 in the quarterfinal of the German Cup. Two American players were involved. Timothy Chandler went 77 minutes for Eintracht in the win while Josh Sargent was subbed into the game in the 82nd minute in the loss.

For Timothy Chandler, he will turn 30 at the end of the month but a return to the United States national team might not be out of the equation after a great few months combined with injuries, U-23 commitments, and poor form which are hitting other American players. Chandler can play right wing or right back and this month, Reggie Cannon is likely with the U-23 team, Paul Arriola is injured, Tyler Boyd is not playing, and DeAndre Yedlin is also not playing much. Things seem to be breaking his way and his good form is coming at the right time.

For Josh Sargent, he is not playing well and he is on a bad team at the moment. The numbers are staggering. In its last 10 Bundesliga games, Werder has one once and lost nine times. During that run it has been outscored 25-3. The elimination from the Cup at least gives it a opportunity to focus on its relegation battle.

This week, Andrija Novakovich continued to play well – despite a disappointing result from his club, Frosinone. In his last three Serie B games, Novakovich has two goas, two assists, and a drawn penalty. In the 2-2 draw against last-place Livorno, he drew a penalty and assisted. In the middle of a promotional race, it was a letdown to drop two points but the club still sits in second place.

Novakovich recently told ASN he had yet to hear from Gregg Berhalter since he took over as manger for the U.S. team but it is hard to see how a forward pool is coming together for the U.S. team. The U-23 team will likely take Jesus Ferreira and Jeremy Ebobisse. Josh Sargent isn’t playing well, Jozy Altidore has a history with injuries. There just aren’t a lot of options at the moment.

Red Bull Salzburg gets some revenge

Things have been rough for Jesse Marsch Red Bull Salzburg after the sale of top players in January. Its lead atop the Austrian Bundesliga table is gone and it now trails LASK by six points.

On Thursday, Salzburg got a little bit of revenge with a 1-0 win over LASK in the semifinal of the Austrian Cup and will now face surprising second-tier SC Austria Lustenau in the final

The league title has taken a rough turn but at least Marsch is in a good chance to play for piece of silverware.

A topic has been raised by numerous media about the fact MLS players might not even be getting released for the upcoming Olympic qualifying tournament. The problem is that head coach Jason Kreis is asking for an early release due to the first game being critical against Costa Rica. That game will take place in March 20 and Kreis wants to be prepared for that game.

It’s understandable and it is also understandable why MLS teams are balking at having key players missing league games. A lot of the U-23 players are very important to their teams these days.

In the end, however, I think Kreis will get his lion’s share of MLS players although it might require him being flexible with when they arrive in camp.

With that said, here is a final predicted qualifying roster.