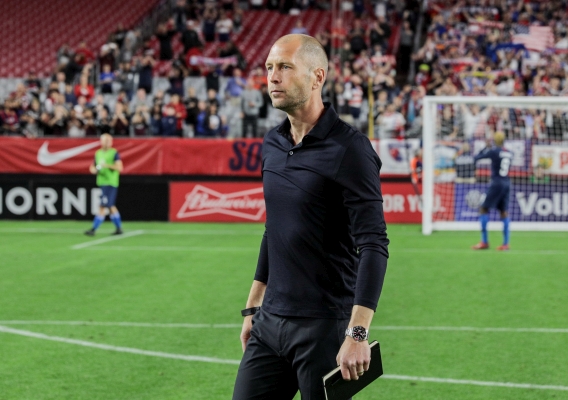 The 2019 Gold Cup was always going to be Gregg Berhalter's first major test as manager. This morning the New Jersey native named his squad for the regional championship and many of the country's best players will take part. The roster also includes some surprises. ASN's Brian Sciaretta takes a look.
BY Brian Sciaretta Posted
June 06, 2019
11:00 AM
UNITED STATES national team manager Gregg Berhalter today announced his 23 player roster for the 2019 Gold Cup and while it contains many of the top players in the pool, it comes on the heels of a very disappointing 1-0 loss to Jamaica on Wednesday night.

Christian Pulisic, Tyler Adams, Weston McKennie, Jozy Altidore, Zack Steffen, and Matt Miazga will all be taking part. Normal starters DeAndre Yedlin and John Brooks are carrying injuries and were not on the 40-player preliminary roster.

Several of the players who took part in the loss to Jamaica did not make the final roster including U-23 Olympic eligible players Antonee Robinson, Cameron Carter-Vickers, Josh Sargent, Jonathan Amon, Jackson Yueill, and Djordje Mihailovic might instead focus on that team which has an upcoming camp in Salt Lake City.

Here is the roster along with a few thoughts


There is considerable firepower


This team has the talent to win the Gold Cup, no question. Tyler Adams, Christian Pulisic, Matt Miazga, Weston McKennie, Duane Holmes, and Tyler Boyd are all coming into this team on the heels of strong seasons.

If Boyd and Holmes integrate quickly into the team, it will be a tremendous boost as the team has needed more offensive options who can breakdown defenses.

Jozy Altidore and Aaron Long can also be very important to the team’s chances if they are healthy. Both players – along with Jordan Morris, have missed time in recent weeks due to injuries.

But this is without doubt the strongest roster that Berhalter has assembled so far in his tenure and he clearly has shown an open mind to recruiting dual national players like Holmes and Boyd who could pay huge dividends.

Buying into the “disruptive” system


On paper, this team could do very well. But will it translate? That is an open question. That is why the U.S. team’s loss to Jamaica was concerning. That certainly wasn’t the best U.S. team but on paper it was still superior to a Jamaican team where most of the players were based in USL or Jamaica. But Jamaica had a plan to succeed and played a lot harder.

Berhalter wants his team to be disruptive and that didn’t happen as Jamaica controlled the ball with ease. This Gold Cup team is impressive but if it doesn’t play up to its potential, it could very well lose. Having players all on the same page is far more important.

The key players to watch will be those that can win the ball back in the midfield. Duane Holmes was one of the few players who showed well against Jamaica. Weston McKennie is also critical as that is his specialty. Then there is Tyler Adams who will likely continue his hybrid right back/central midfield role but getting Adams to be a defensive presence in the midfield is critical.

Wil Trapp and Michael Bradley are the questions marks here. Both can pass well but will they give too much time and space to opponents? Trapp failed in doing that against Jamaica in what was a very poor game from him.

The first few games of the Gold Cup, however, should allow for preparation for the knockout stages.

A Look at the notable omissions


A few will be surprised to see Josh Sargent not on the team given that he could also have played at the U-20 World Cup. But Sargent has not played a lot of soccer in 2019 for Werder Bremen. Even when he was sitting on the bench for the club’s first team, he was not playing important reserve matches.

Jonathan Amon did not make the U-20 World Cup team but is also likely eyed towards the Olympic team. The fact he was called up to this senior team despite having a limited role within U.S. Soccer shows that Berhalter is trying to find a role for Amon right now. Berhalter went with Lewis for the super-sub winger role – and to be fair, Lewis is playing a lot more after his move to Colorado (which has also improved since Lewis joined).

The Olympic team is thin on wingers but whether or not Amon plays in the qualifying tournament will come down to his release. Right now it is rumored that Club Brugge is interested and they might be more cooperative than Club Brugge.

Aside from Lewis, so many of the players on the bubble but who were also eligible for the U-23 team did not make this team. Cameron Carter-Vickers, Djordje Mihailovic, Antonee Robinson, Jackson Yueill (who played against Jamaica but was not an option for the Gold Cup team), and Josh Sargent are all examples.

Having these players play for the U-23 team right now is not a bad decision at all so long as there is a realistic chance they can be release for qualifying – the dates and formats of which are still not finalized. Having a strong and well-functioning Olympic team is a huge tool for the men’s program.


The Gold Cup roster, on paper, is a good one. It’s not ideal and there are certainly some holes – like left back, central defense depth, the No. 6 questions, and questions as to how promising newcomers will integrate into the team. U.S. Soccer is still working through a developmental gap and having a balanced roster with experience that features players excelling at every position is still not possible.

Some supporters will be disappointed with the cuts of a few young players that are still new to the professional game – but that is also something that will hopefully be fixed by the players in the year ahead in terms of earning regular minutes.

For now, this roster is roster is strong enough to win the Gold Cup while also giving the U-23 team enough space to grow and hopefully return to the Olympics (which historically was a great stepping stone into the first team).

Now the pressure will be on Berhalter to get his roster to play to its potential and win the games ahead. If he does that, it will be a much needed boost of enthusiasm and momentum to program that badly needs it.