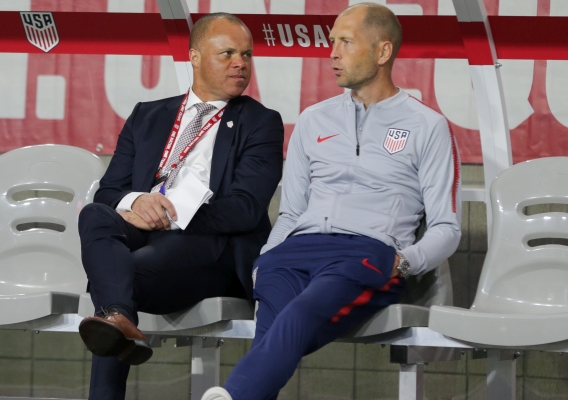 A look a Berhalter's USMNT roster for the September friendlies

The roster continues with mostly the same core of players from the Gold Cup with a few notable missing names as well as a few notable inclusions.


Injuries to Tyler Adams, Matt Miazga, Tim Weah and DeAndre Yedlin prevented their respective callups and Duane Holmes has not returned to Derby’s first team yet after his calf injury. So Berhalter had his hands tied slightly in bringing in all of his first choice of players.


The names that jump out quickly are Sergino Dest, Paxton Pomykal, and Miles Robinson.

For Dest and Pomykal, the call-up is a reward for both strong steps at the first team level of their clubs as well as with strong youth national team performances for the United States. It is a smart call-up in that players of this caliber should be moved through the system

For Dest, he played for the United States at the U-17 World Cup in 2017 and the U-20 World Cup in 2019. Now he is breaking through into the first team of one of Europe’s most prestigious clubs for young players. Even if he were not a dual national who could potentially attract the interest of a high-profile national team, his call-up would be completely deserved.

For Pomykal, he is another big statement for what has become a very impressive FC Dallas Academy. Right now, it is the academy with the biggest footprint among U.S. youth national teams. Dallas is in a playoff battle and Pomykal has been the team’s engine.

“In terms of Sergiño and Paxton, those were two players that were heavily involved in the U-20 World Cup," Berhalter said. "It’s nice to bring players through our system, see how they’ve done in major competition and then get a good look with the full national team. I think they’re both ready. They’ve both been getting first team minutes and are ready for this next challenge.”

Miles Robinson, 22, is another different story. Unlike Pomykal or Dest, he was not a highly rated teenager. He was around the U.S. U-20 team in 2017 but did not make the roster for qualifying or the World Cup. He also did not play much for Atlanta in 2017 or 2018. But Robinson is a case that players can develop and breakthrough a little later, and U.S. national teams have to recognize there will be players who breakout at ages older than the U-20 or even he U-23 levels.

At Atlanta this year, Robinson has flourished under Frank de Boer who has given him a lot of responsibility in his system. De Boer has helped Robinson reach his potential and Atlanta United is now atop the Eastern Conference and is the newly crowned Eastern Conference Champions.

“Miles is a guy who we’ve been really impressed with watching league play," Berhalter said. "He’s been dynamic in the back, is a real physical presence and has been working on breaking lines with his passing. When you evaluate it and look where Atlanta has gone as a team, he’s a big part of why Atlanta has turned things around and are now in first place in the Eastern Conference.”


Three notable regulars are not on this roster in Michael Bradley, Jozy Altidore, and Paul Arriola. While Berhalter has yet to comment on this, it is likely due to perilous club situations. For Altidore and Bradley, Toronto is struggling to get into the playoff positions and has two massive games during the international window (September 7 vs. Cincinnati and September 11 vs. New York City).

For Arriola, DC United is currently mired in a rough stretch and Arriol (per the Washington Post) is out for family reasons.

But regardless of the reason for their absence, it opens up the door for others who are at the camp to impress.


Alfredo Morales has been away from the U.S. national team for years but the absence of Michael Bradley and the injury to Tyler Adams has opened the door in defensive midfield. Morales has earned the call-up based on a strong start to the Bundesliga season at Fortuna Dusseldorf as well as an impressive preseason.

Morales will turn 30 this season and might not have a long leash, but he deserves to be here. The U.S. team needs someone who can be a disruptive defensive force in the middle of the field and that is where Wil Trapp has struggled.

“Alfredo is a case where he’s done such a good job with Fortuna Düsseldorf, not only through the first two Bundesliga games, but we’ve seen reports from preseason where he’s been an outstanding player," Berhalter said. "It’s nice to give a guy a reward like that – an opportunity again because of how he’s performing at his club.”


Josh Sargent is back with the team after a controversial omission from the Gold Cup team. Berhalter has insisted that Sargent’s time will come but with no Altidore, this is clearly the right opportunity. Plus he will get the chance to play in his hometown of St. Louis.

Sargent had a very good preseason with Werder Bremen but the start of the season has been a little rocky with playing time.


All things considered, this roster strikes an appropriate blend of promising young players and established veterans despite players due to club situations and injuries.

There will be plenty to watch from this camp.

Berhalter named a roster where a lot of players have a lot to prove. This is a camp of opportunity and the next two weeks will show who seizes it.