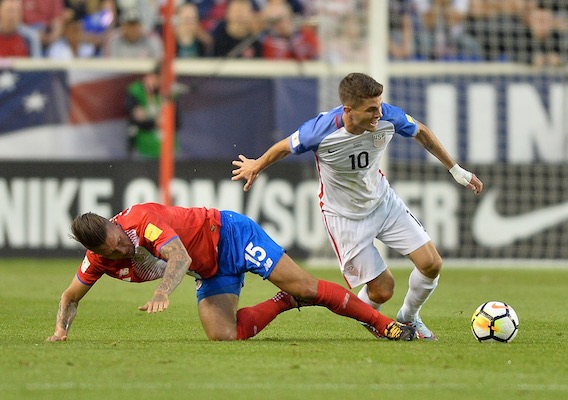 A Lack of Chemistry and Grit Led to Costa Rica Loss

Experimental partnerhsips in defense and attack failed miserably Friday night at Red Bull Arena. Meanwhile, Christian Pulisic was brutalized throughout the match and nobody came to his defense.
BY Brian Sciaretta Posted
September 02, 2017
8:00 AM

THE UNITED STATES men's national team lost to a superior Costa Rica team on Friday night in Harrison, N.J., and now finds itself in perilous position in World Cup qualifying. Over the course of 90 minutes, the U.S. could not make the big plays and committed major errors in the back.

Costa Rica, on the other hand, took its chances well and was better organized defensively. That is why the Ticos are cruising to the World Cup.

The Yanks need to right the ship ASAP and walk away with a result from Tuesday's contest in San Pedro Sula, Honduras. Otherwise, it will be trying to find ways to sneak into a November playoff just to qualify for Russia. Here are my thoughts on what went wrong at Red Bull Arena.

Geoff Cameron seemed like the right player to start. He had been so consistently good for the United States that it was almost a no-brainer. Meanwhile Tim Ream was a logical back-up for the injured John Brooks because he has been in good form for Fulham and has been solid all year. Also, both were part of a five-man backline that was effective against Mexico in June.

But it did not work out.

Cameron had maybe the worst game of his international career and Ream was not any better. Between the two, it was just a horror show. It makes you wonder how they trained together all week: Was the lack of chemistry on display?

Both goals, along with several other Costa Rica opportunities, resulted from backline gaffes. Mentally, it seemed like Cameron and Ream just weren’t there.

Either Omar Gonzalez or Matt Besler will have to start in Honduras because Arena is going to be forced to make a change. He could go with Besler-Gonzalez or Besler-Cameron or go with a three-man backline featuring Gonzalez, Cameron, and either Ream or Besler. Arena has options but will clearly look at this first when deciding what went wrong on Friday.

Another thing Arena will have to strongly consider is having another defensive midfield partner alongside Bradley to help shield the backline.

Midfield was undermanned and static

The United States had plentry of opportunities in the final third. But where was the final pass to play the forwards into dangerous chances? Where were the shots to test Costa Rican keeper Keylor Navas? Where were the crosses that could break down an organized backline?

The only American who played up to his potential was Michael Bradley. Darlington Nagbe showed his possession skills but he was ineffective translating that into danger. Fabian Johnson was completely invisible. Christian Pulisic was physically manhandled all night.

Arena may have put his best players on the field but it wasn’t the right formation for making things work. The midfield was overmatched and badly needed an extra body—both for physicality and possession. A forward needed to be removed for a midfielder and Fabian Johnson needed to be dropped either to a fullback role or from the game altogether.

Over the course of the game, the U.S. midfield could not open up the game in the team’s favor. The runs were not there to set up through-balls or open crosses. Defensively, the U.S. midfielders had a difficult time dealing with the Costa Rican wingbacks in the five-man backline.

Bobby Wood and Jozy Altidore might very well be the two best American forwards for their clubs right now but that does not mean that they are going to be effective playing together. Wood is a lone forward for Hamburg; Altidore plays off of an explosive and highly mobile Sebstian Giovinco. Altidore has often played well with those types of partners (American fans will fondly remember him paired with Charlie Davies). But going with a slower and powerful forward like Wood does not seem like a fit for Altidore.

The game was begging for either a one forward setup to provide an extra man in midfield, or it needed at least one of the forwards to be more mobile with the other providing hold-up play. Wood and Altidore together were redundant and provided the same skillset. It would not be surprising if the U.S. team found more success dropping one and going with someone like Jordan Morris who can at least help stretch the defense.

Altidore is suspended for the Honduras match so Arena will have to consider a new plan of attack. It will be interesting to see his proposed solution Tuesday night.

Even when he’s not at his best, Christian Pulisic can still put himself in dangerous positions. Even tonight he was in a great position in the first half, inside the box, only to flub a simple cross.

That said, Pulisic is going to take an absolute beating in CONCACAF games. Costa Rica made it a top priority to stop Pulisic. Any time he broke free from a defender, another Costa Rican would step in and foul the Borussia Dortmund star—even if it meant taking yellow cards.

The United States national team needs to be aware of this, and do something about it.

If Jermaine Jones was still a part of the U.S. team, he would not let opponents have a free shot at Pulisic. He would protect him out there on the field. Remembery when Jurgen Klinsmann said the U.S. team needed to be nasty? This is why.

Klinsmann needed to be fired and Bruce Arena does not need to bring back Jones because he does not partner well with anyone else in central midfield. But the U.S. needs to protect Pulisic out there and prevent opponents from making dangerous tackles. The Americans need to set that tone and stand up for their star.

Mexico and Costa Rica are running away with the first two spots. Trinidad & Tobago are essentially out of the running for qualifying.

That leaves the United States (eight points), Honduras (eight points), and Panama (seven points) in a three-team race with the top team earning a spot to the World Cup, the second place team going to a playof against an Asian team, and the third team missing the 2018 World Cup.

The bad news is that the United States could very well fall to fifth place on Tuesday. Panama is heavily favored on Tuesday at home against Trinidad & Tobago. That should bring Panama to 10 points.

Should that happen, the Yanks will likely need six points from its final two games and it will have to hope Costa Rica and Mexico field strong teams in October despite having qualified.

Even a fourth place finishes is dicey. Potential opponents in a November playoff include Saudi Arabia, Uzbekistan, and South Korea.