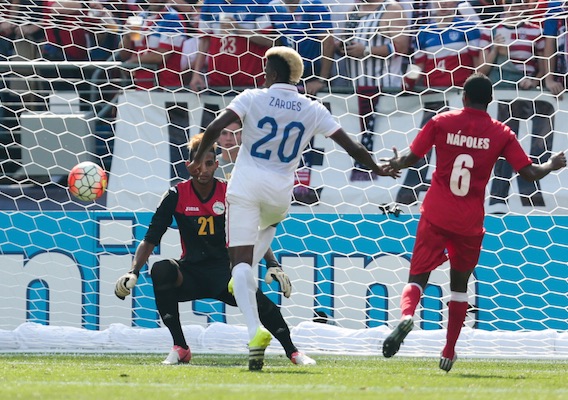 A Confident Start, and a Mandate for More Like It

Everybody knew the U.S. men's national team had the talent to deliver a dominating performance like that's night's 6-0 win over Cuba. The players are now focused on replicating that display against Jamaica
BY Brooke Tunstall Posted
July 19, 2015
8:45 AM

BALTIMORE—Granted, it was only Cuba, but this is the kind of domination that has been expected of the United States at the 2015 CONCACAF Gold Cup.

In a performance the team hopes will springboard its form and enhance its chances of winning a second consecutive Gold Cup crown, the U.S. national team never gave Cuba a chance, striking in the game’s opening minutes and not letting up until late into the second half in a 6-0 quarterfinal win.

“We wanted them to take it really seriously. We didn't want to waste anything,” said U.S. coach Jurgen Klinsmann. “We didn't want to fool around and kind of show off or anything like that. I made it very clear to everyone on the field that anyone that takes it lightly, we're going to take him off after 10 minutes.”

The U.S. advanced to Wednesday’s semifinal in Atlanta (6pm ET; Fox Sports 1, UniMas), where it will face a Jamaica team that beat Haiti 1-0 in the nightcap at M&T Bank Stadium.

The U.S. is now riding a nine-game unbeaten streak that includes high-profile victories last month over the Netherlands and Germany. Instead of building on those strong efforts, however, the Americans have struggled against their regional opponents, slogging their way to one-goal wins over Honduras and Haiti before having to rally to tie Panama earlier this week.

The U.S. came into this game hoping not just to advance, but do so convincingly. In all three group stage matches, the U.S. opponents came out of the gate faster and kept the Americans on their heels early and sometimes often.

This also happened two years ago in the Gold Cup against Cuba. In a first-round match in Salt Lake City, the underdog Cubans took a 1-0 lead in the first half before conceding a tying goal to the U.S. just before halftime then fading in the second half and falling 4-1.

“You have to be on your toes in these types of games,” Klinsmann said. “You cannot have the wrong body language. You can't be arrogant.”

With all that as the backdrop, the U.S. came out swinging Saturday.

The U.S. was better rested: Cuba beat Guatemala 1-0 Wednesday in Charlotte while the U.S. last played Monday in Kansas City, Kan. And Klinsmann has rotated through his roster while Cuba was down to just 19 players. Toss in the stifling heat that saw temperatures in the mid-90s, and the Americans’ superior fitness, and nothing about this game’s final result should have been much of a surprise.

"You come into the tournament knowing that it's going to take six games, all-out, to lift the trophy," said midfielder and captain Michael Bradley. "There was no expectation on our part that these games were easy."

From the opening minute the U.S. looked sharper, with purposeful off-the-ball runs by Aaron Johannsson and Gyasi Zardes that instantly created space and led to the sort of crisp, proactive passing that had been lacking in the first round.

“As soon as the whistle blew, we seized the opportunity and just took the game to them,” said Zardes.

The U.S. drew first blood in the 4th minute when right back Timothy Chandler rewarded Klinsmann for sticking with him through some shaky games. He delivered a perfect cross into the box that Clint Dempsey met in mid-air and nodded home to the give the U.S. a 1-0 lead.

“We just started better,” said Dempsey. “I think we put the game to bed early. When you start well, get goals, you play with more confidence, the game has to open up. We know they were a team that grows with confidence as the game goes on. We knew we had to put on a veteran performance that we did.”

Minutes later, Zardes and Johannsson each struck, set up by perfectly placed passes by Fabian Johnson and Bradley, respectively, and the rout was on less than 20 minutes into the match. Two of the first three U.S. goals came from crosses, which wasn’t a coincidence.

“We were hungry today and guys were finishing chances,” said Brad Evans, who played the second half at right back. “Yesterday we worked on swinging in crosses because we knew they’d be packing it in and that’s where we’d get chances. We had good finishes yesterday and that translated to today.”

With Bradley controlling the midfield and Kyle Beckerman snuffing out the occasional Cuban threat, Brad Guzan and the backline that played in front of him had little to do defensively. Guzan will likely never keep an easier clean sheet, as he only had to make one save of a soft Cuban shot.  He calmly watched a couple of others sail wide.

Center back Omar Gonzalez didn't have much to do defensively but he managed to contribute on the other end of the field, scoring his first career national team goal late in the first half when he got a foot on a header from Johannsson after a Bradley corner kick.

In the second half, Dempsey completed his first-ever hat trick in a U.S. uniform, converting a penalty kick after Johannsson was dropped in the box, then deftly finishing with the outside of his right foot after yet-another nice pass by Bradley.

Another Goal for USA! This time it's Bradley to Dempsey. 6-0 USMNT. #GoldCup pic.twitter.com/Np46KBNOMk

It was the kind of performance that champions, both reigning and aspiring, need to make against vastly outmatched opponents.

“The biggest thing was we wanted to up the tempo, get more people involved, so a lot of the things we were looking before the game to do we were able to do.” said Beckerman. “We still have to improve in the next game, we know we have a tough one coming up.”

Has the U.S. turned the corner or did it just bully a poor team?

Klinsmann's men will find the answer out soon enough against Jamaica, a side the Americans have historically dominated but one that is playing cohesive soccer right now.

Chandler believes that setting an early tone will be key in that match as well.

To a man, the team seems to know the key to carrying this momentum over is a strong start to the next game, playing with high energy and commitment. It sounds simple but if it were that way in reality, the U.S. would never struggle with slow starts.

So what do they need to do ensure they start the game off on a the front foot?

“That confidence definitely grows in the team and as the tournament goes on, we are getting stronger as a group, and hopefully our best ball is yet to come.”