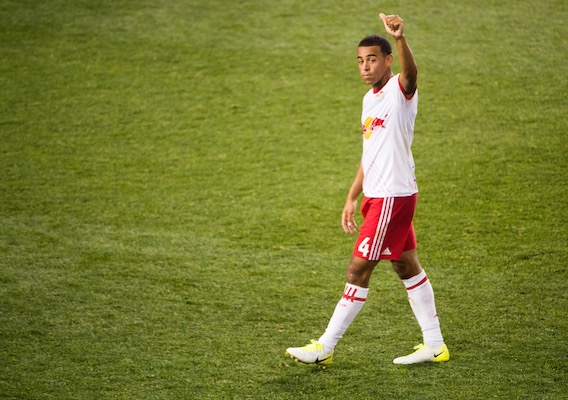 7 Americans Who Could Transfer to European Clubs

Danny Williams fell just short of making it to the English Premier League with Reading, and could manufacture a move to get there with another club. Here's a look at some Yanks who may be on the move.
BY Brian Sciaretta Posted
June 19, 2017
6:00 AM

WHEN THE CALENDAR hits June soccer fans know that transfer talk will begin to heat up. Often referred to as the “silly season,” most of the discussion is based on rumors and speculation. Despite this, there is plenty of evidence to suggest that a number of American players can and will be on the move soon.

There was already one blockbuster this spring when John Brooks moved to Wolfsburg, breaking Jozy Altidore’s record for the highest transfer price for an American player.

Brooks won’t be the only American on the move in the coming weeks, and here is a list of potential players on the move.

Four years ago Danny Williams left Hoffenheim to move to Reading, and he did so because he wanted to help the Championship club move up to the Premier League. He nearly accomplished his goal last month but Reading lost to Hudderfield in a penalty shootout in the playoff final. Williams earned praise for his performance in defeat and since 2016-17 was the final year of his contract, he is now a free agent.

Reading has made a new offer to Williams but the German-born American has yet to sign it. It is thought he has other offers and still is looking for a way into the Premier League. It would not be unreasonable for him to entertain Bundesliga offers but if he can negotiate a good deal with a Premier League team, that is probably where his heart will take him.

Williams has earned a solid reputation for Reading over four years and is now in his prime at 28. He's a very athletic player ad would probably fit well on a low-to-midtable EPL side. Since he is such a known commodity, there is a strong likelihood that he finds what he is looking for.

Erik Palmer-Brown, 20, is perfectly positioned to make a move to Europe. In 2016, the Missouri native went on loan to Porto and immediately became a starter for Porto's secont team, helping that club win a Portuguese Segunda title. Earlier this year he won the player of the tournament award in the CONCACAF U-20 Championship. And at the U-20 World Cup, he was one of the best defenders in the entire tournament. He is now rightfully considered one of the best American prospects in the game.

The timing couldn't be better for Palmer-Brown as he is in the final year of his contract with Sporting Kansas City and he can now sign a pre-contract for no transfer fee. It is a golden opportunity that few American players of his age with his resume will have.

Paris St. Germain is one of the teams taking a look but that is far from a done deal. And there are other teams in the mix: Right now multiple teams in the Netherlands and Belgium are considering their options and big European clubs are also in the hunt. A move to a big club will probably require an immediate loan to provide Palmer-Brown with first-team minutes as opposed to time with a reserve team.

It will come down to what Palmer-Brown wants to do. Does he shoot for a big team now and go the loan route or does he go to a smaller team in Europe where he can break into the starting XI relatively soon, grow as a player, and then push for a sale in a few years? Or will he remain with SKC, which is likely to come in with an offer that includes a significant pay raise?

The best guess is probably that Palmer-Brown jumps to Europe with a team that has a path to the first team sooner than later. He does not have the number of professional games other American players at his position have had before making the jump. Miazga moved after establishing himself as one of the best defenders in MLS. Palmer-Brown is probably itching to play first-team soccer.

Josh Sargent put on a tremendous show at the U-20 World Cup. He delivered a first-rate performance with the U-17 team in April for World Cup qualifying and then successfully made the move up to the U-20 team in just a matter of weeks.

The problem for Sargent, 17, is his age. He cannot make a move abroad until he turns 18 next February but things will be lined up well before then—similar to the way Nick Taitague and Haji Wright moved to Schalke (both players were in the NASL until they turned 18 but a deal with Schalke had been in place many months before).

During the World Cup it was reported that Sargent was heading for Werder Bremen but then follow-up reports suggested that bigger teams were going to swoop in at the last minute. As of now, however, Werder Bremen still looks like it is the likely destination.

But what will Sargent do between now and his 18th birthday? He will need to play so he could be heading for the U-17 World Cup in order to get games. It is also possible to see him make a few trips to Germany to train.

Tyler Adams, 18, impressed at the U-20 World Cup in South Korea and is in a very good position at the moment. After winning the USL title last year as a key player for the Red Bulls II, he is a first-team starter for New York and his reputation within the league and the team has been steadily increasing in 2017. It is worth discussing whether or not it is the best time for him to make a move given he only recently earned his first-team starting role and is still growing into that role. He is in a position where he is still learning and is not stagnating.

He could have options right now. On Wednesday night, Adams played his first game for the Red Bulls following the U-20 World Cup and shined in a 1-0 win over New York City FC. Red Bull head coach Jesse Marsch was suspended for the game and assistant coach and former U.S. national team central midfielder Chris Armas coached the Red Bulls in his place. After the game, Armas praised Adams and the tone of his comments give the sense something could be up.

“I said to him after the game, he's so much fun to watch,” Armas said. “I played that position on the field. I think I know what goes into it, how demanding it is. I think he's way better than I was. Watching him play, the way he can cover ground, at such a young age be that fearless. He can just clog up the middle, shut things down. Second half, you can see one of the recovery runs he made down the left channel. It's incredible to watch.

“I think we all have to take notice and enjoy that as much as we're going to have him here,” he added on a potential move. “In terms of, might he follow along? I think with his mentality, aspirations, I'm sure that he could play in a different league someday. As long as we have him, I don't know the discussions behind the scenes, but Tyler is ours, I hope we keep him for a long time. When it comes time for him to go, we would be wishing him well. We want to see him do great things…I think he's tremendous.”

If it were to happen, Adams probably has interest from the Netherlands and Germany. If the Red Bulls want to keep him and perhaps ensure a large transfer fee for whenever he is sold, the Austrian ownership is going to have to come in with a big offer—maybe even a youth designated player deal. Also, it wouldn’t be surprising if there is discussion on a transfer to Red Bull Salzburg. The Austrian Bundesliga might not be a step up from the New York Red Bulls but those running the teams under the energy drink umbrella apparently now use Salzburg as a holding spot for prospects who might eventually find their way to Leipzig.

The New Jersey native had a very productive loan to Vitesse last season where eventually he broke into the team’s starting lineup and helped it win the Dutch Cup—the club’s first piece of major silverware in its 100-year history.

Now that the loan is over, Miazga has plans to return to London to join his parent club, Chelsea, for its preseason. Miazga is on the Gold Cup preliminary roster for the U.S. national team although if Chelsea wants to keep him for preseason, Miazga may decide not to accept the call-up at this important stage in his club career.

Assuming Chelsea want to put him out on loan again, the English giant will likely have offers from bigger clubs than Vitesse. Espanyol was close to landing Miazga last year and it wouldn't be a shock if he drew interest from clubs in the lower part of the Premier League, the Championship, the Bundesliga, or Spain. Vitesse would love to have him back but that seems unlikely—maybe only as a fallback option.

Brady Scott, 17, was a backup goalkeeper on the recent U.S. U-20 World Cup team. By all accounts he impressed during camps and will likely be the No. 1 keeper to start the 2019 cycle. He has trained with top European clubs and it would not be surprising to see him sign over there once he turns 18 this summer.

Often overlooked in discussions about Americans playing abroad, Irish-born American defender Shane O'Neill had a good loan with NAC Breda this past season. By Dutch standards, NAC Breda is not a small club but it has underperformed. Last season O’Neill wore the captain’s armband several times and helped the club earn promotion back to the Eredivisie.

O’Neill is under contract with Apollon Limassol of Cyprus but has never played for them. He has instead been on loan at first to Royal Mouscron-Péruwelz of Belgium, then to Cambridge United of England's League Two, followed by NAC Breda.

But last season was his first noteworthy steps in his European career. The good news is that NAC Breda would like him to return. O’Neill might return if a bigger club does not swoop in. Either option would be solid because it would mean his floor is the Dutch top flight.

For amusement, it’s still fun to make note of Freddy Adu sightings. After parting ways with the Tampa Bay Rowdies—where he rarely played—Adu is now trialing with Syrianska FC which is currently in 13th place of Sweden’s second tier. His career is now more of a sideshow but if he ever writes a book about it, it could be fantastic.