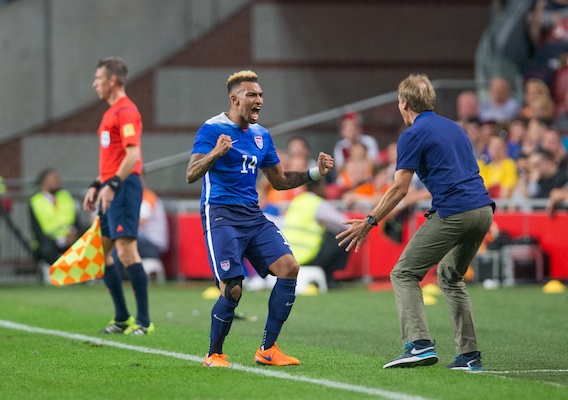 6 Thoughts on the U.S.' Wild Win Over the Netherlands

What should we make of the United States' 4-3 win over Netherlands? Brian Sciaretta went back and watched the contest a second time and came up with six key takeaways that transcend the shocking scoreline.
BY Brian Sciaretta Posted
June 07, 2015
8:30 AM
ON FRIDAY the United States national team defeated the Netherlands, in Amsterdam, in what was one of the wildest friendlies you will ever see. The Yanks' thrilling 4-3 comeback win featured two late goals—and both teams probably believe they could have scored at least seven.

It was both well-played and sloppy. There were some very well-taken goals along with some beautiful passing. Both teams suffered through defensive lapses and miscommunication too.

At first it was difficult to wrap my mind around the contest but after a second viewing some thoughts began to take shape as to how this contest figures into the big picture.

The most glaring weakness right now on the U.S national team is that no central defenders has stepped up and made a case to be a first-choice starter. Even for those who have played well at their clubs, there has been a noticeable drop-off at the international level.

John Brooks is coming off a solid season with Hertha Berlin and clearly possesses tremendous talent. In his appearances for the national team, however, he has yet to replicate the form he shows regularly in the Bundesliga. He has been too gaffe prone—particularly when it comes to aerial duals and clearing crosses.

In the 25th minute, Jans-Klaas Huntelaar was gifted a golden opportunity when Brooks was caught ball watching out of position. Two minutes later, Huntelaar scored off a cross where Ventura Alvarado was the main culprit but Brooks could have made a play as well.

On Huntelaar's second goal in the 49th minute, Brooks again misjudged a cross after Huntelaar broke free from Michael Orozco.

But the issue right now is that there is a lack of chemistry and defensive breakdowns are far too common in central defense. One contributing factor: Klinsmann has been experimenting at the position since the World Cup—and his tinkering has not worked. Significant time was spent trying to convert Jermaine Jones to the position. In the January camp, the 3-5-2 was deployed unsuccessfully.

Will Klinsmann stick with Brooks, Alvarado, and Orozco for the Gold Cup, or will he revert back to the World Cup trio of Geoff Cameron, Matt Besler, and Omar Gonzalez? A third option could be that he gives another look at MLS defenders like Steve Birnbaum or Matt Hedges.

Either way, building a solid core of central defenders who are comfortable with each other and the team should be Klinsmann's top priority.

The fullback issues are likely another cause of concern for Klinsmann and it will be interesting to see how he decides to fix it. Timothy Chandler has more than 120 Bundesliga appearances at right back but he still makes a lot of head-scratching defensive mistakes. He is frequently caught out of possession and opponents usually have a field day attacking on his side.

Chandler can get forward effectively but against top opponents in important games, there should be genuine concern whether he can be trusted defensively. If Yedlin is still being used as a winger or if he is still not seeing enough minutes, one potential option is to retry Geoff Cameron on the right side who has shown at Stoke that he is very responsible defensively.

At left back, there are still growing pains in trying to convert Brek Shea to the position. When the Gold Cup games get more intense  after the group stages, will Shea stay there? If not, is Greg Garza ready for the job? Do you take Fabian Johnson out of his best position in the midfield and move him back to left back? The position has been the Achilles heel of the U.S. team for decades and there isn't yet a light at the end of the tunnel.

Team speed can mask technical shortcomings, cover up poor play, or keep opponents on their back heels. But pace has been in short supply for the Americans in recent years.

That said, speedsters DeAndre Yedlin and Jordan Morris showed what the U.S. national team could look like with faster players on the pitch. It was very difficult for the Dutch to defend these two and their presence really opened up the game for the entire team.

The problem is that both Yedlin and Morris are in tricky situations right now. Yedlin is trying to break in at Tottenham and minutes are tough to come by. Morris is still in college and it is not clear when he will turn pro (where he will likely join Seattle). It is unreasonable to expect these to be consistent when they are not playing professional minutes on a regular basis. But it is also clear that they can be major contributors with the full national team.

Danny Williams's display in defensive midfield was a bright spot against the Dutch. He replaced Kyle Beckerman in the 63rd minute and was a huge asset. His 88th minute equalizer, though deflected, showed that he has a cannon from distance that can be a weapon.

The timing of his performance couldn't have been any more perfect. Jermaine Jones has been injured and his status for the upcoming Gold Cup is uncertain. Jones and Beckerman, both 33 years old, are at, or approaching, the time in their careers where they will have to be replaced.

Klinsmann has options in defensive midfield. Alfredo Morales has been given a look and so has Perry Kitchen. Both players will continue to be in the mix but Williams is the leader of the pack right now.

Zardes settled into the game nicely

Gyasi Zardes looked good against Panama in February but struggled at times in the March friendlies. Zardes struggled early against the Dutch. He had a golden chance in the 16th minute but his close-range effort was saved. His goal in the 33rd minute, however, displayed a lot of skill. He made a smart run to gain a step on the defender and finished with the outside of his right foot on his first touch.

Following the goal he settled down and was an asset in the attack. The jury is still out as to where Zardes will fit into this team. Friday's effort will keep his name in the mix for a while.

The most welcome bit of news from Amsterdam wasn't on the scoreboard. Instead, it appears that a new core of players is emerging—a group of athletes Klinsmann should feel comfortable using in crucial games.

Three such players (Zardes, Williams, and Wood) scored their first international goal on Friday; Brooks tallied his second. Morris and Yedlin each delivered crucial second half assists—and both players remain eligible for the U-23 Olympic team.

Time will tell, but don't be surprised if this game signalled a the turning point—an out-with-the-old, in-with-the-new moment for the U.S. men's national team.

What did you take away from that match? Share your thoughts below.